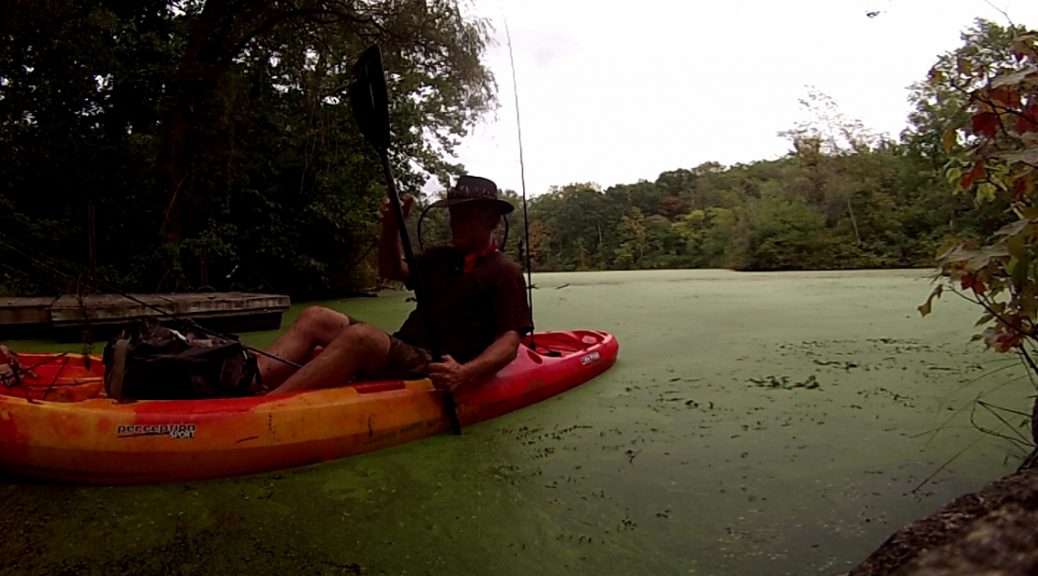 Sunday was a big deal…..for me anyway. See I took the `Yak out for the first time since I suffered that heart attack back on July 14th. Now it probably doesn`t seem like much to most of you out there, but it was a big deal to me, as I work my way through this element of uncertainty.
I went out back and cautiously picked up my `Yak for the first time in two months and loaded up in my truck. The Murano won`t work anymore as I can no longer lift anything above my head. I then told Sharon where I was heading, and that I would text her my exact location once I got there as well.
Arriving at the lake, I was very anxious to get the `Yak in the swampy, green-pea soup looking water. “Had to be a bass or two in here” I thought to myself as I carried the `Yak to the water`s edge.
Now if you`ve been following my site/blog, you know that I`ve been really nailing nice Bucket-Mouth Bass at night on Jawbone Top-Water Mice Lures. So why not try one today as well?
As soon I began tossing the little rubber mouse close to the edge of a bank, I noticed a decent swirl in the muck to my left about forty yards away. Slowly I re-angled the `Yak, pointing it in the direction of the swirl and took a cast. In a matter of seconds…..BAM! Fish on! And a decent one at that! I battled him through the thick swampy muck, eventually working him close to the `yak. Nice fish! As I had him right alongside the `yak…..he thrashed the swamp grass and was off.
Not bad, I thought. Less than ten minutes here and I already had a bass on that was at least eighteen inches.
As I worked my way over to another area, I cast into a break where the pea-green soupy water met a clear opening. BAM! Fish on! Nice young bass met my mouse.
And yes, I even brought my Go PRO that day. So without any further ado, here`s the short clip that I shot of the day`s adventure back in my `Yak;
Hope you enjoyed my adventure. Till next time…..
See all of my Adventures here.