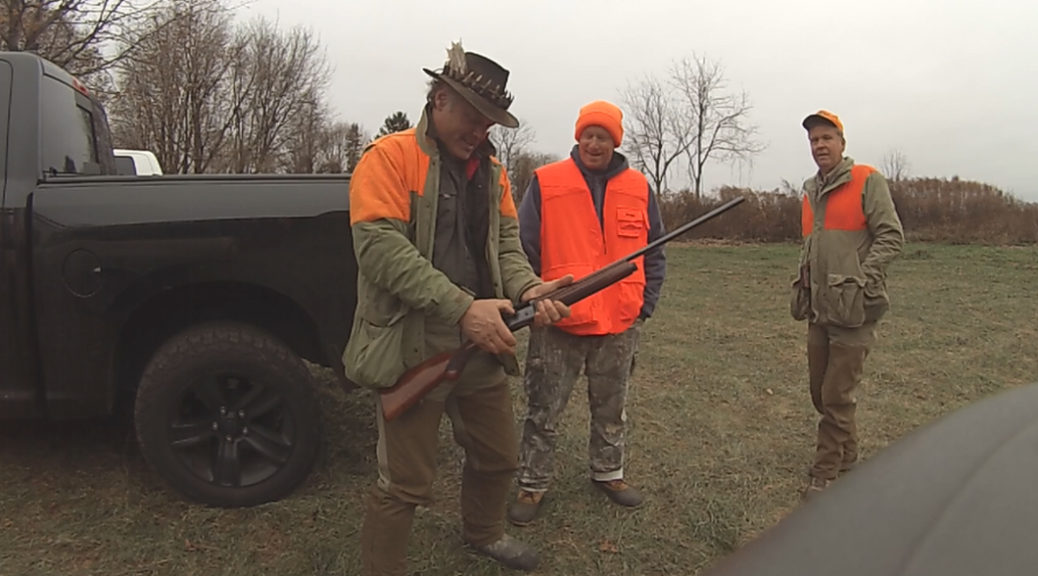 Had a really great time taking out my good friend Jeff Van Nest, pheasant hunting for his first time yesterday. Personally, I get a real sense of enjoyment when I take someone hunting or fishing, especially if it`s their first time afield.So let me tell you how the day started out.
My hunting partner Curt, called me earlier in the week and invited me to his gun club to have a go at some chukars and pheasants on Saturday morning. He told me they were stocking some extra birds so it ought to be good. We got to the club and began to hunt around 8am. The problem we had right off the bat, was `ol Jake was a little too rambunctious and wasn`t listening to Curt very well as he wasn`t staying very close to us. After a half hour or so, Curt got him to settle down a bit and Jakey did point a couple birds. Curt cracked one chukar and missed one. My barrels stayed cold, as I never raised my gun.
His hunting club is a fairly small piece so it didn`t take long to hunt as we called it quits by 9:30. Curt asked if I`d be interested in going to the state land over at Spruce Run, since it was so early in the morning. I said, “Sure…… why not? Hey let me call Jeff and see if he`d like to meet up with us” – I got hold of him and told him, “Hey get a orange hat and vest and meet us over at Spruce Run around 10, we`ll have a gun for ya” –
This turned into a real nice “reunion” as Curt and Jeff worked together back in the `80`s and hadn`t seen each other in over twenty five years. Curt let Jeff use his gun and just worked-and-walked with Jake as we all hunted.
As we headed out across the fields, we passed another hunter on his way back to his truck. Said he had a successful hunt and had bagged to pheasants. Now that it was later in the morning, there were very few hunters in the area.
Wasn`t too long after that, `ol Jake was on point. We all circled towards the area, were Curt`s GPS tracker was saying he was. Sometimes the birds can get a little more edgy this time of day and won`t always hold point, especially if they`ve been chased of shot at a few times already. And that turned out to be the case. As Jeff and Curt got closer, the cockbird busted point and Jeff fired off a shot but missed. I wasn`t anywhere near the bird……… so the Browning stayed cold.
Curt suggested we chase the pheasant as it hadn`t flown all that far away. He called Jake into the hedgerow and immediately the dog was on a “running” bird by the way he was hunting! Curt and Jeff stayed on one side together and I ran around to cover the other side of the thick cover. In a matter of minutes, I heard Curt`s 20 gauge over-under Beretta crack the autumn air as Jeff fired off a round! Next thing I heard was the pheasant tumbling through the tree tops! Jeff had just shot his very first pheasant!!

After all of our congratulatory hand shakes and pat-on-the-backs, Curt suggested we try to upper field as, “We always done well up there later in the day” – We trekked around the brush-hogged path, Curt saw a cockbird right in the middle of the path on a knoll, about a hundred yards away. We decided to see if Jake could find the pheasant and started to walk towards it knowing the bird would break into a hedgerow or field way before we ever got close. And right into a thick hedgerow he darted. When we go closer, another hunter was coming towards us and stopped to chat. He told us how “they just aren`t stocking this place like they used too…..There are hardly any pheasants anywhere out in Spruce Run ” – We told him that we were going to work around the field and he replied, “Yea go ahead….. but you`re just out for a nice walk fellas….there aren`t any birds. Hell they didn`t even stock here last night” – Curt and I just looked at each other and smirked a little bit as we said goodbye to the hunting “expert” –
We worked our way around the bottom half of one field and eventually circled up high to the upper part with no luck.
Then things started to get interesting…..
`Ol Jake stated barking…… like he does when a pheasant goes up into a tree! But within a few minutes he was heading back in our direction…….so we all continued along the cut path. Within fifty yards it split and one part of the path went down towards the thick field where he had barked. I went that way and Jeff and Curt stayed on the high end. Jake was definitely interested in heading towards the area I was going……and in a matter of minutes he flushed a cockbird behind me in the middle of this over-grown, thick field! I quickly spun around and shouldered the `59 Browning A5 20 gauge, fired off two quick rounds and the pheasant crashed through the thicket! Immediately as the bird crashed through the brush, it first appeared to be the bird getting up again……but it wasn`t! It was another cockbird bursting into the air! With one shot left in the Browning, I fired quickly and watched the ringneck tumble into brush! What were the odds of that happening? The pheasant I shot actually caused another to flush as it crashed through the thickets! Absolutely awesome! Jeff and Curt watched the whole episode and Jeff commented, “That`s some real good shootin` Ken!”
What a perfect way to end a perfect hunt. Good friends and good shooting! 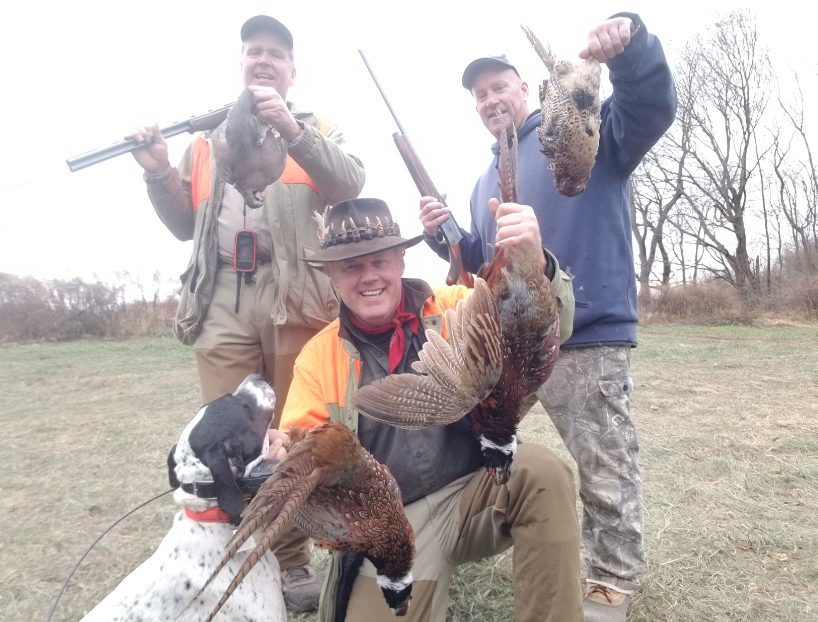