One thing that I really enjoy doing in the `Yak, is exploring new territory and this past Saturday I did just that.
The challenge of fishing in a new body of water is very appealing to me. However, I sort of got mixed vibes from the various posts that I read on-line about my latest targeted waterway, Budd Lake. As quite a few had posted about having little or no luck at all on the largest natural lake in New Jersey.
A little tid-bit about Budd Lake:
Budd Lake was named after John Budd, who acquired 1,300 acres of land in 1714. Prior to that, it was called Hattacawanna Lake. A glacial lake at an evaluation of 933 feet, Budd Lake has a surface area of 374 acres. making it the largest natural lake in New Jersey. It is 7-12 feet deep, and can have large algal blooms.
Now, the forecast was a chilly 47 degrees, rainy and with a breezy with a very gusty wind at times. “Hmmmmm… “Perfect! More than likely the lake would be deserted on such a “nice” day!” I thought to myself as I smiled while looking out the window. With that thought i mind, I got dressed, loaded up `Yak, grabbed my hat and headed out to Budd Lake. The beauty of where we live(Well….. there are many other ones….. like my “friends” those Bears on the patio! HaHa!) is the fact that there are so many great fishing waters within a ten mile radius of our house. And Budd Lake is exactly ten miles away.
I pulled in the lot a little after 9am and the wind was howling as the cold rain pelted my face. I actually had second thoughts about draggin` the `Yak off the Murano. “Ahhhhhh….I`ll hang along to shoreline as I paddle out” I said aloud trying to convince myself. With the wind blowing out of the north-west, I was in for some tough paddlin`. Not only was I going to have a long paddle, but paddling directly into the wind. And once I reached my destination on the lake, it would be blowing the `Yak across the lake…..and ideally I wanted to work my way back down the edge. In a nutshell, my arms were in for quite a workout fighting the wind while trying to fish as well!
Probably took me a good hour or more fighting the wind, to paddle across the lake. But I finally got there and was ready to have at it!
There were three reasons that I was rather intrigued with Budd Lake; Bass, Pickerel and Northern Pike…… all in the same waters! So being a veteran Esox-chasin`-son-of-a-gun, I started out with a couple of favorite go-too lures from my arsenal that would simply target any of the three species of fish I was after. I attached a blue and black Chatterbait to one rod and a chartreuse and white 3/8oz. Spinnerbait to the other.
I have my Shimano reels spooled with 30lb Power PRO and I run a 30lb. 6 inch wire-leader because I have had more than a couple of those toothy critters slash the line with their razor-like teeth. Personally I want to land my fish not watch them swim away with a big lure in their mouth. 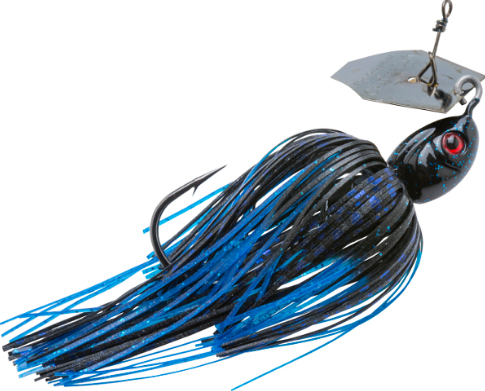 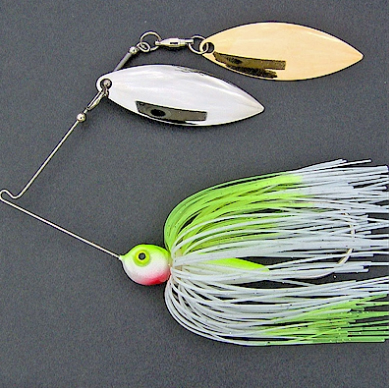 I worked my way along the shore casting into brushy cover along the treeline. “`Ol Esox had to be here as it just looks too good!” I said to myself. Then BAM! Fish on! Felt like a good one at that as the Northern Pike thrashed the top water with his tail! The drag ran as he dove under my `Yak and crashed and shook his head on top of the water on the opposite side! I quickly walked my rod around the front of the `Yak to get the line on the other side. The drag peeled off more line as he dove down into the murky water of the lake! After about ten minutes of fighting, I finally netted the beautiful 35 inch Esox and had my 1st Northern Pike at Budd Lake. 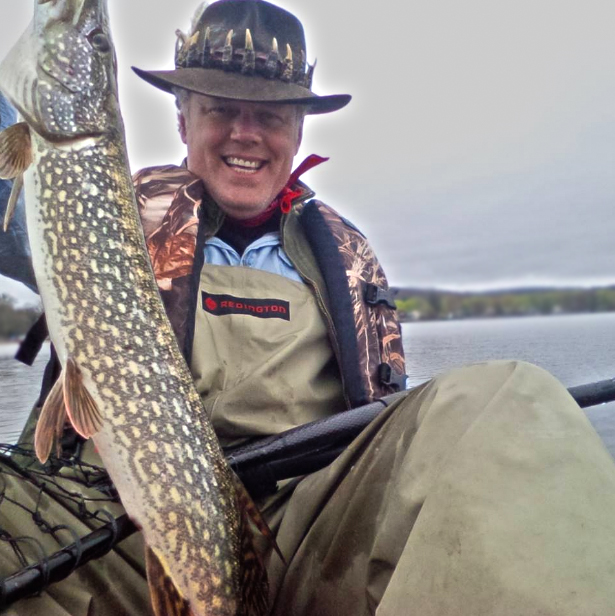 After a couple pictures, I quickly released the `Gator back into the pond unharmed. “I have a feeling things are going to get “interesting” out here” I thought to myself as I made my way back to where I had left off.
After about thirty minutes, I got into this little shallow sort of cove or cut-out among the trees. Quietly I drifted a little closer so I could pin-point some casting into the cover. On the third cast, as the Chatterbait hit the water, a violent wake came towards it immediately! WHAM! Fish on baby! Here we go! Another nice pike thrashed about that I quickly netted. Another nice, colorful Northern indeed. My second of the morning. 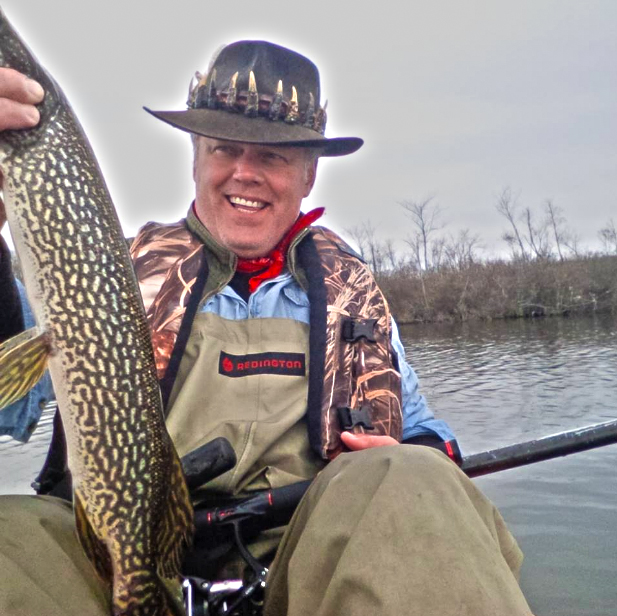 Decided to start throwing the Spinnerbait on my second set-up as I have caught many Northern Pike and Pickerel on this color combo in my outings. And it didn`t take too long, as the drag started reeling off line! Fish on again! As my rod doubled over, I knew I had another really nice New Jersey Northern Pike! After a short battle, I netted the tired, fat toothy critter. And I had my 3rd Budd Lake Pike of the day. 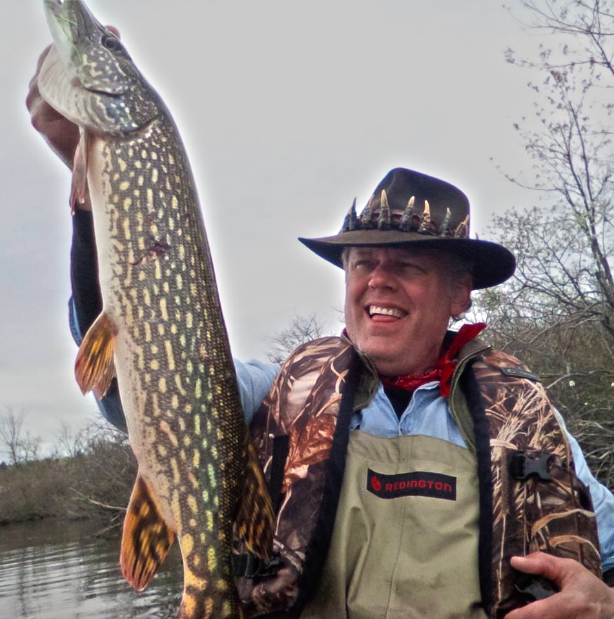 Wasn`t long after that I had another strike……… but it felt a little different than the past three. A tad more sluggish. More of a pull and run. I had a good idea what it was as I set the hook. Yep….. I was right! A decent “Snot-Rocket!”…. Not quite the fight of the Northerns, but all and all a good one. A nice 22” Chainside Pickerel was quickly scooped into my net. 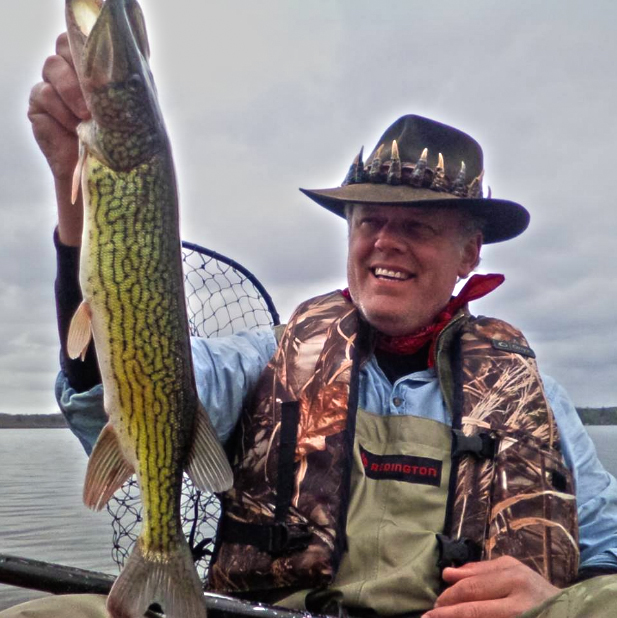 After a few hours, I had made my way almost along the entire edge and it started raining pretty hard. “Ahhhhhh…….. `bout time to call it a day” I said aloud as I was pretty chilled(which I get pretty easily nowadays because of the blood thinners I have to take) – I figured I`d make a couple more casts and get the heck out of there……….. And I went back to throwing the black and blue chatterbait…….
Ohhhhhhhh boy! What an explosion!! As a Monster Largemouth Bass attacked the Chatterbait! Making several sporadic jumps and flips before I could finally net her! A beautiful 5.8lb female full of eggs! I quickly took a picture of and gently released the “Mama Bass” back into the pond unharmed. 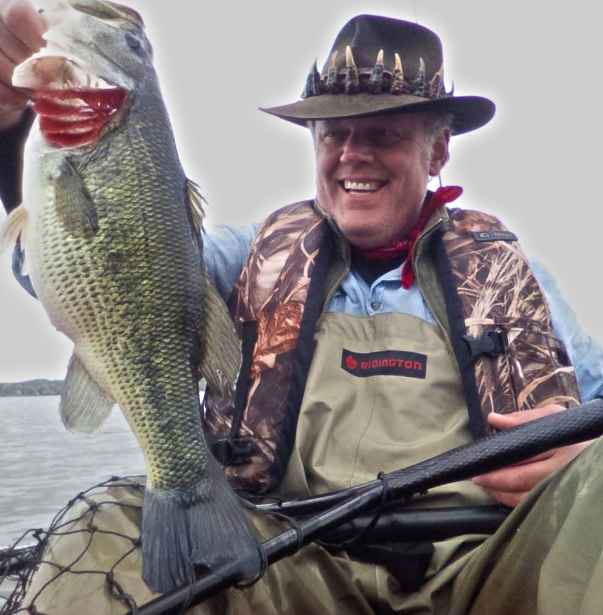 So I guess you could say I hit my Budd Lake Trifecta that day…… Pike, Bass and Pickerel!
Definitely enjoyed my 1st time out on Budd Lake. Quite the Adventure indeed. I`ll be back. And if you happen to recognize my `Yak or my hat, pull up and say “Hi” ………always enjoy talkin` to Friends out on the water.