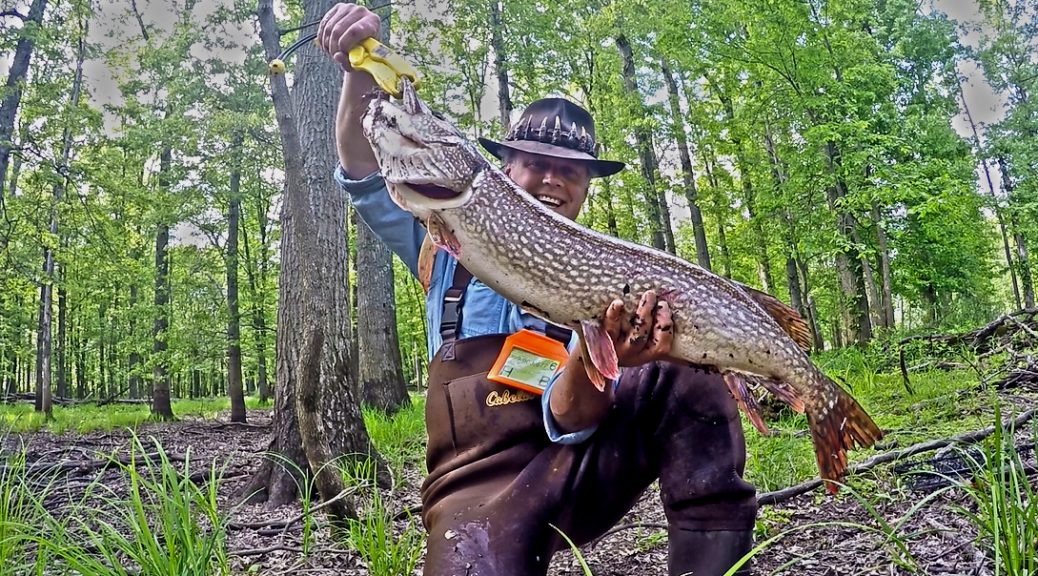 In my quest for a river monster NJ Pike, I ventured out into some newer territory down on the Passaic River last Sunday with my `Yak. And it turned out to be quite the adventure indeed!
For starters, the forecast was 100% rain the night before, but for whatever reason, it completely slip my mind until I drove 56 miles to my destination that next day! The Passaic was up and a bit more murky/muddy than it was normally that afternoon. “Ahhh what the hell, I`m here now”, I thought to myself as I unloaded my `Yak. So out I went.
I started working a white five inch Swim Shad and actually had one smack it right at my `Yak in the first fifteen minutes. But so much for the fast-action. As I worked my way downstream without even a follow for the next couple hours.
Then I switched to a tried-and-true 3/8oz. chartreuse spinner-bait with a bright green twister tail. From one of my favorite tackle stores……. Walmart. When it comes to line, I always go back and forth between monofilament and Power PRO. This day I happen to grab my Mitchell 300 reel spooled with 10lb. Mono and set it up with a 20lb steel leader as I always do. If there`s one thing to keep in mind with Pike fishing, is simply this; Don`t ever underestimate the sharpness of the teeth that these River Wolfs have.
As I worked around a fallen tree and some half-submerged brush, BAM! My first pike of the afternoon attacked the spinnerbait! I landed the nice looking river devil, took a couple pictures and quickly released him back into the murky waters. 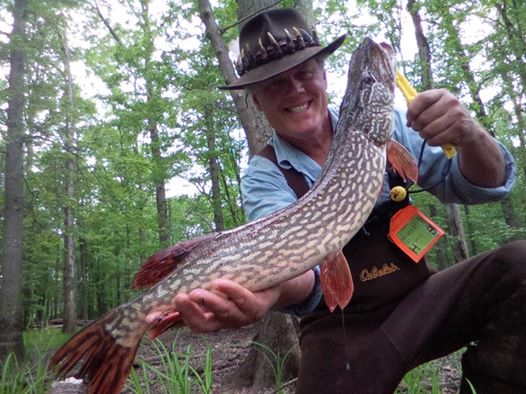 This was my first Pike that afternoon. It went 32″ and had really nice dark green color!
In the next hour or so I paddled way down river and got into a fairly deep pool that debris and brush all around. Looked like my kinda “Pike area” indeed! On my second cast in this area, BAM! Pike on as I set the hook! “Hmmmmmm……….. must be a smaller one” I thought out loud to myself as I started to reel him in, because there was hardly any “pull” on the other end. As I got the Pike closer to to Yak, he was on my right side, then all of the sudden, he dove violently to my opposite side under the Yak dragging my pole under it as well! Completely caught me off guard as I thought I was about to take a dip in the pond and roll the Yak! 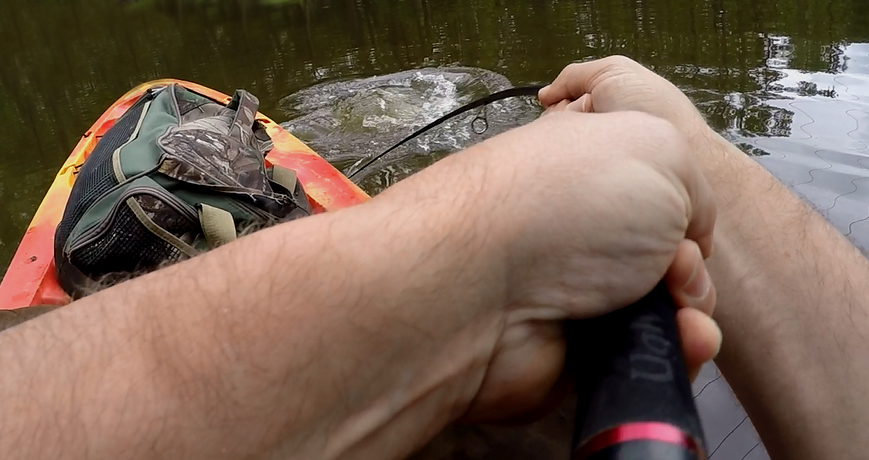 As you can see, the River Monster started to turn this day into a real adventure diving under my `Yak!
I battled the big Pike for a good fifteen minutes, tiring him out before I could get him to the surface. When he finally came to the surface, I wasn`t sure how or if I could get him in my net. So I scooped him from the murky water flipping him on top of me in the Yak and quickly wrapped my leg in a figure-four around his body! So there I am wrestling with this big pike that`s half in the net and half on me and trying to paddle to shore!
So as I`m paddling to a clearing upstream 75 yards away, the monster started going nuts and almost slipped out of my figure-4 and net! And in all the chaotic action, I mistakenly laid my pole on the net, trying to hold everything in the Yak! The Pike flips the net hard enough to kick my pole in the river! “Ohhhhhhh shit!”, I said, as I watched my pole slowly sink into the Passaic! “Ahhhhhhh the hell with that pole, I`m hangin` on to this fish!”, I thought to myself. So about 60 yards the shoreline, I seemed to be dragging brush as I could feel it pulling me back as I paddled. “What the hell am I caught on?”, I said as I jumped out ten feet from shore. I got the monster Pike wrapped up in my net and even secured the net with my stringer so he couldn`t accidentally escape, as I put him in the water. “Now what the hell was I caught on?”, I said as I pulled the Yak to shore.
HOLY COW!!!! My rod and reel! Yep…….. When the Pike flipped my rod and reel overboard, I just happen to have a extra bungee strap hanging over the side! Now check out the pictures and I`ll explain what happened – 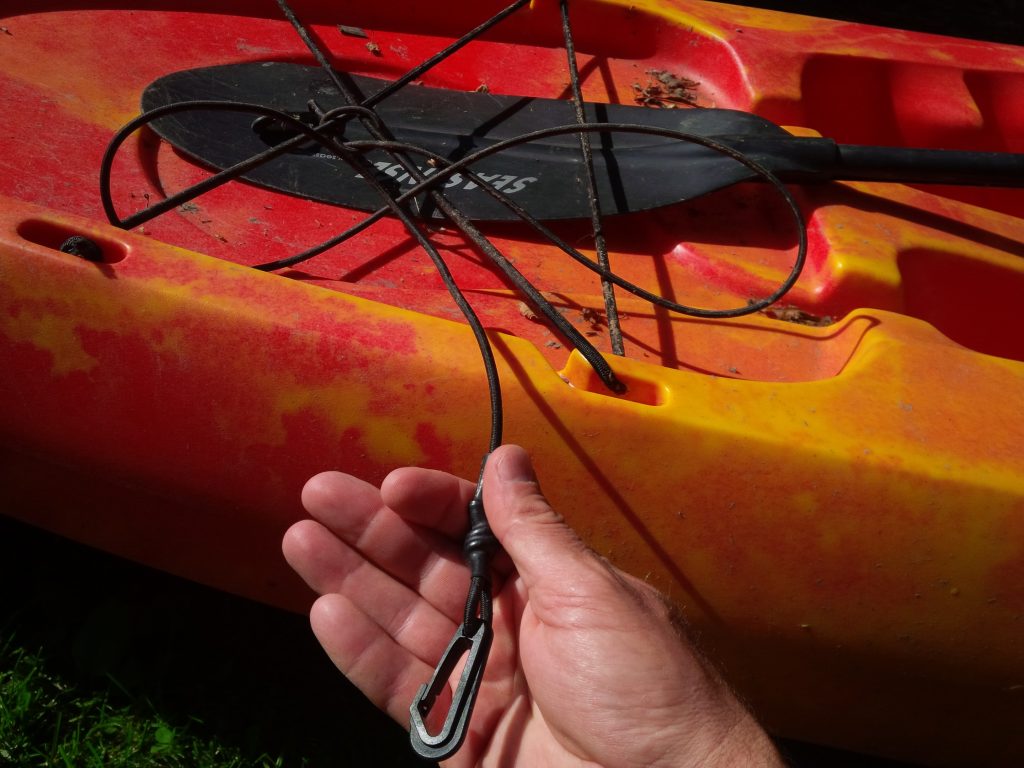 This was the extra bungee hanging off the side of the Yak.
As the rod and reel feel in the water, the line actually caught the bungee! 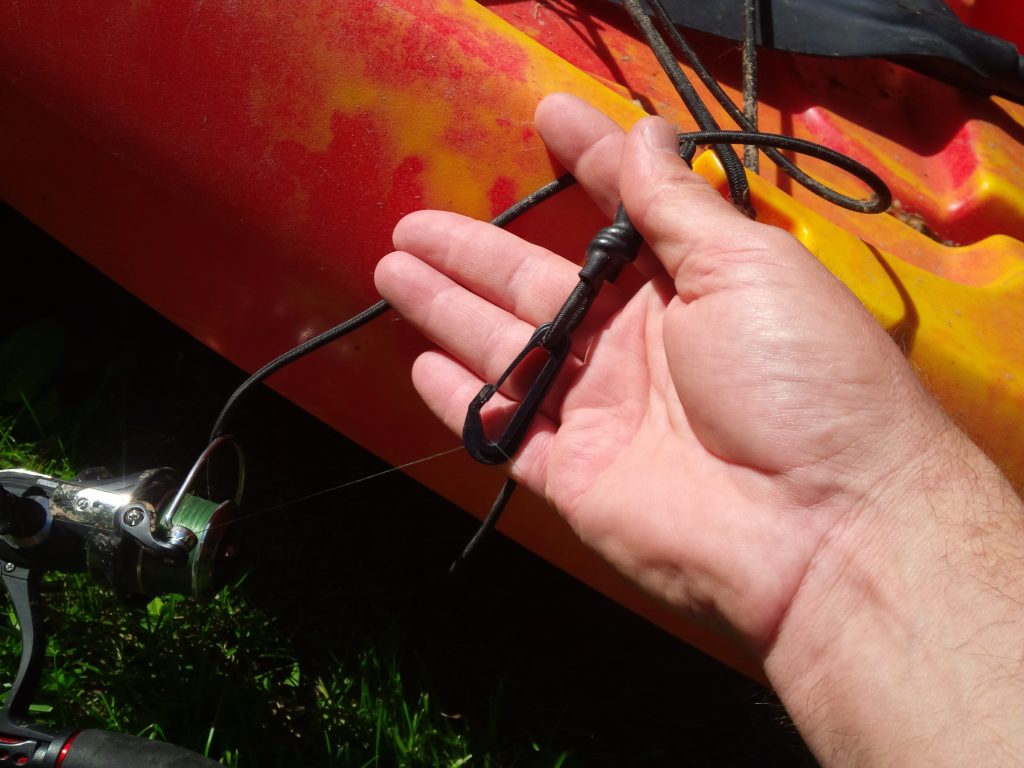 Then the bungee slid down the line and somehow actually clipped on the bail of the reel! 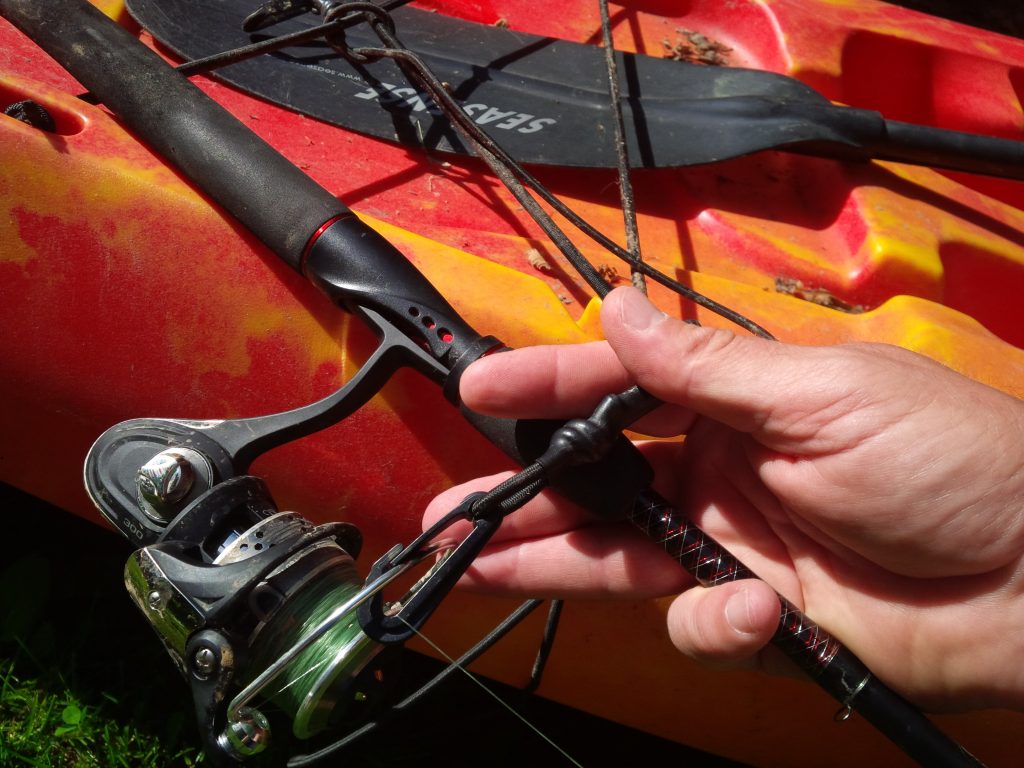 I`m pretty sure I`d have a better chance at winning the Lottery or gettin` struck by lightnin` before this ever happens again! ha! ha!
After takin` a bunch of pics of this beautiful 38″ 10.6lb Northern Pike, that had a 17″ girth, I thought, “This one should go on the wall” – As I sat there for about twenty minutes, admiring the big pike, I smiled and thought, “Nah……. let him fight another day” and I released the River Wolf. 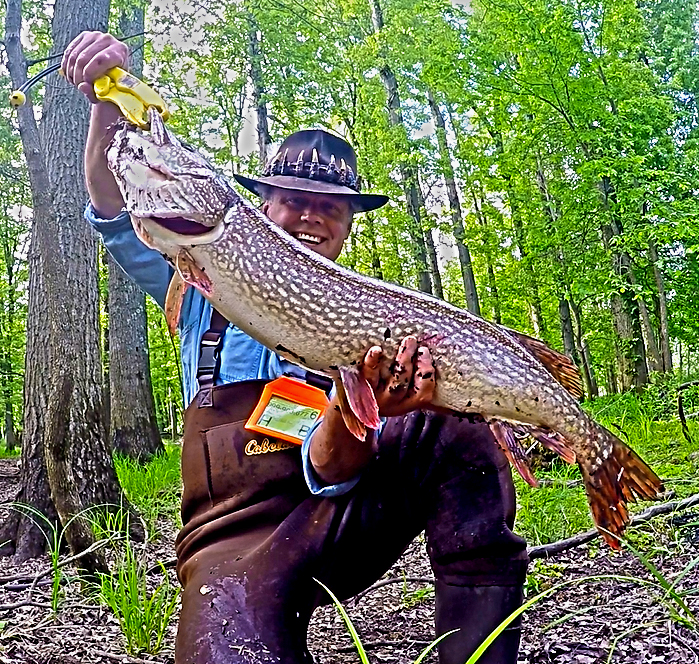 At the end of the day, I drove over to see my friends Mario and Sharon of “Wildlife Artistry Taxidermy By Mario” (908) 857-2214) in Belvidere to discuss having a mount made of my big Pike. So in a few months, I`ll have a beautiful mount of that River Wolf hanging in my office at work that I can look at and reminisce about that afternoon adventure on the Passaic River and the River Monster fights another day.
Till next time….