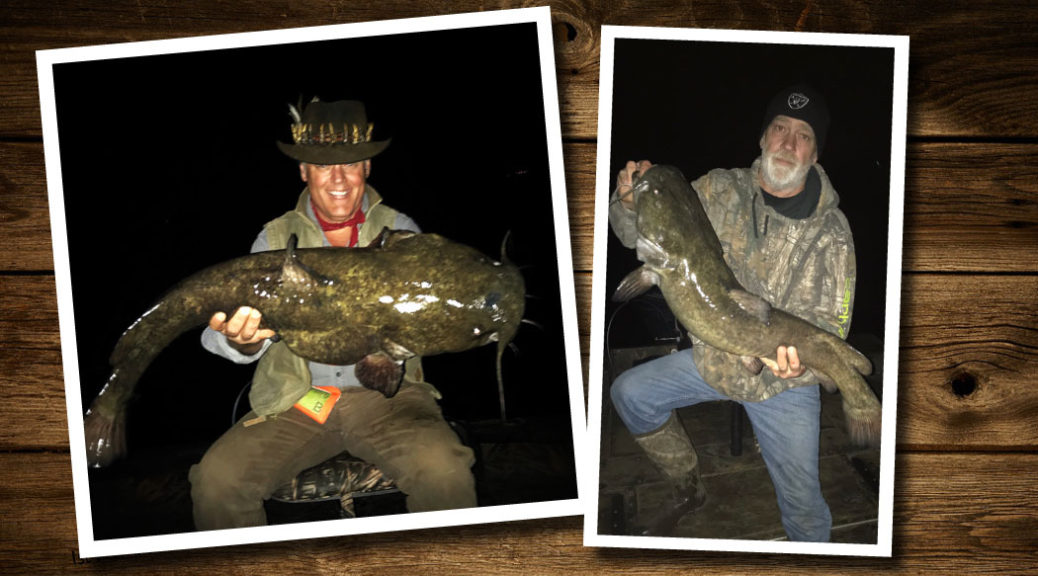 Had the pleasure of fishing with one of the best fishermen that I`ve ever crossed paths with the other night…….. Mr. Dave Au. I have never met anyone that knows the Delaware River like this gentleman.
He truly knows it like the back of his hand.
After a few messages back and forth on Facebook, he said “Hey give me a ring” so I did. Once we connected on the phone, he said, “I met you several years ago up on Mountain Lake Ken, you were releasing a Muskie” I replied, “Well I`ll be damn…… I remember you now!” – Eventually he asked, “Would ya like to have a go at some Monster Flatheads on my boat? Been kinda slow the last two times but third time`s usually a charm!” Eagerly I replied, “Hell yea brother I`m in! When and where?’ So plans were made to meet Monday night north of the Gap.
Dave was already there when I pulled in the parking lot. As I got out of the 4Runner, we shook hands and my host said, “Don`t bring anything….just jump in the truck. I`ve got everything ready let`s go” – I was psyched!
When we launched his awesome boat into the darkness of the Delaware, a light started to kick up across the river that Dave didn`t care for it. “Damn wind might make this a little tough tonight but we`ll see” he exclaimed as the G3 sped off into the night.
We arrived at the first destination of the night and Dave set up four rods. Then baited them all with live white perch that he had caught earlier that day. He explained to me what his strategy was and why he had cast each of the four in a certain area because of the river current.
We hadn`t fished thirty minutes, when all of the sudden I got a solid run on one of the set ups! I picked up the pole and could feel a fish running slightly. “Doesn`t feel like much Dave as it`s barely pulling” – Dave relied, “Yea…….might be a channel cat….. they`ll act like that” – “Listen if he runs, you snap that pole back like your trying to snap it in half!”
So I did just that…………Fish on baby! I started to joke around and said, “Dude I think I`ve got a thirty pounder!” Dave started laughing “Yea yea right…….. wait till ya get a real fish on Mr. Beam!”
But neither of us realized what was really on the end of my line at that time……
Dave kept bustin` my balls and laughingly said…….. “You gonna reel that in or what?” and I started saying, “Hey man this is really pretty heavy” – All of the sudden, he hears my drag and yells, “Loosen the drag Ken play him out!” – And I did for several minutes……. Then said the hell with it and started horsin` the fish in!
He yelled ” Hey take it easy or you`ll lose him!” –
Then we finally got our first glimpse of the beast……… “Holy S#@t! It`s a monster!” I yelled as the huge Flathead dove deep into the dark waters once again! Dave went for the net and yelled “Play him out buddy! Don`t horse him, he`s a really nice one!” With that he quickly laid out across the deck in order to reach a bit further with the very long handled net as he knew the huge Flat wasn`t hooked very good!
I worked the beast up on top of the water and Dave went for it with the net but it was still just a bit out of his reach as he missed! The River Monster dove again as the drag started screaming and the 65lb braid line peeled off as I reeled back fighting the huge fish! Once again, I brought the Flathead back up and this time, Dave was able to masterfully net the beast! 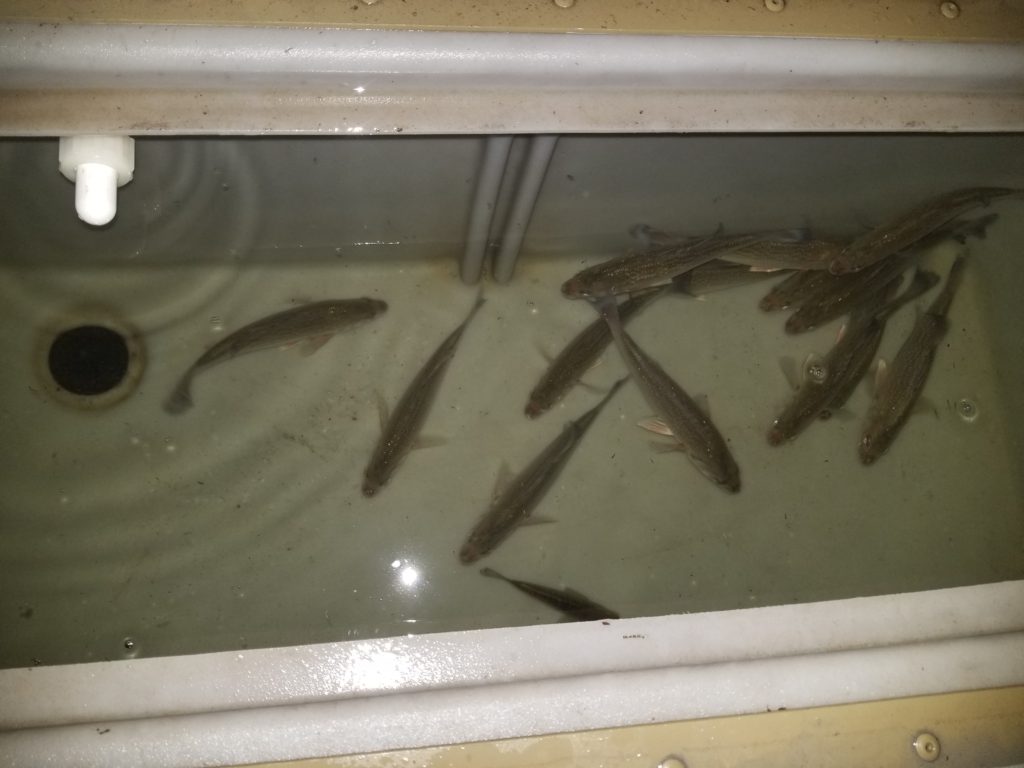 White Perch in the Live-well! Excellent Flathead bait
He got the Monster Flathead in the boat and we were both absolutely ecstatic! I shook his hand, patted his back profusely thanking him, “That is the biggest freshwater fish that I have ever caught!” I exclaimed. – Dave replied,”Well that already made my night Ken, we can quit now and call it a night if ya want! hahaha!”  “Look how he is barely hooked, you were very very lucky Mr. Beam!

Dave cracked out the scale to weigh my River Monster………Well it wasn`t quite thirty pounds as I joked, but heck……… pretty darn close! 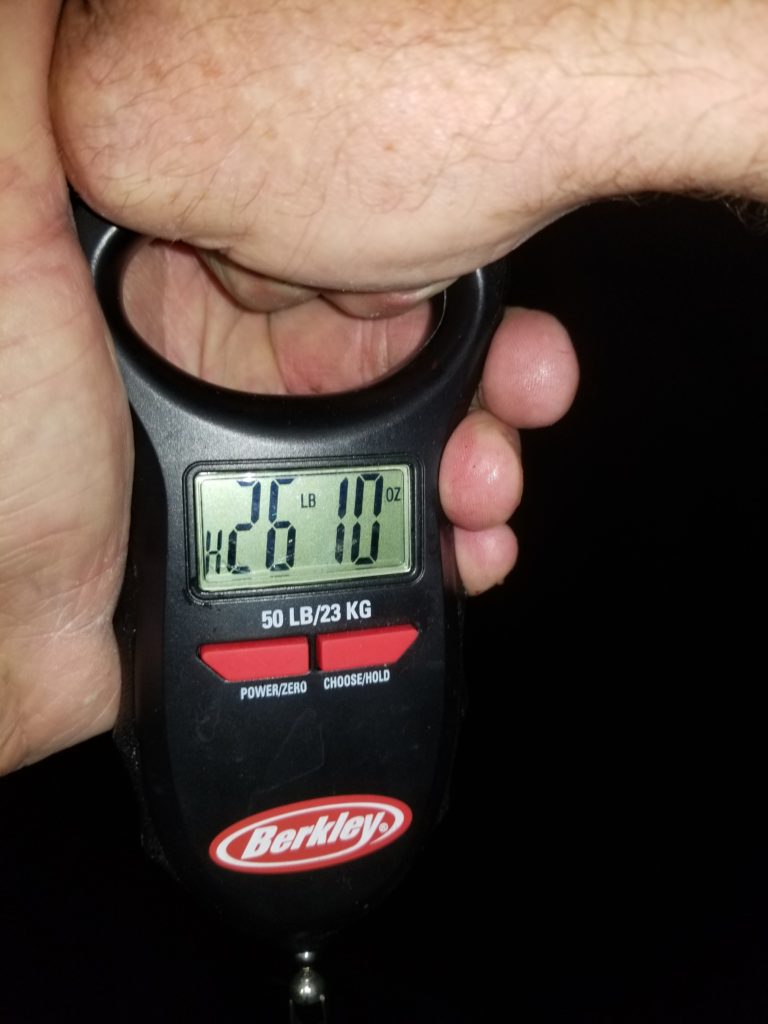 After taking a bunch of pictures, we released the River Monster. Ohhhhhh yea……. I should clarify that a bit. You see New Jersey requires you to destroy invasive species such Flatheads, however Pennsylvania does not. So we were fishing in Pennsylvania that night! 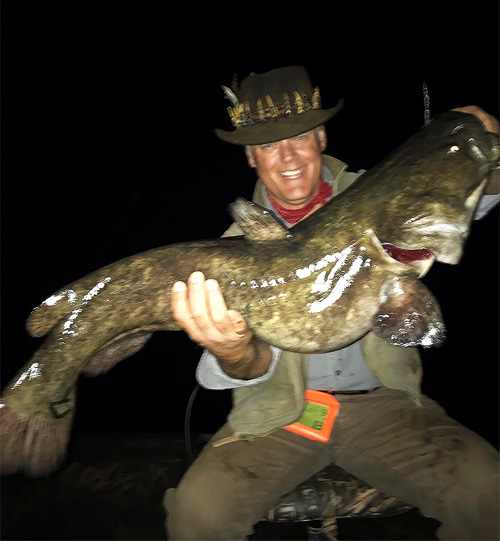 We fished for several more hours finally calling it a night around 2am. – A great night of fishing indeed! 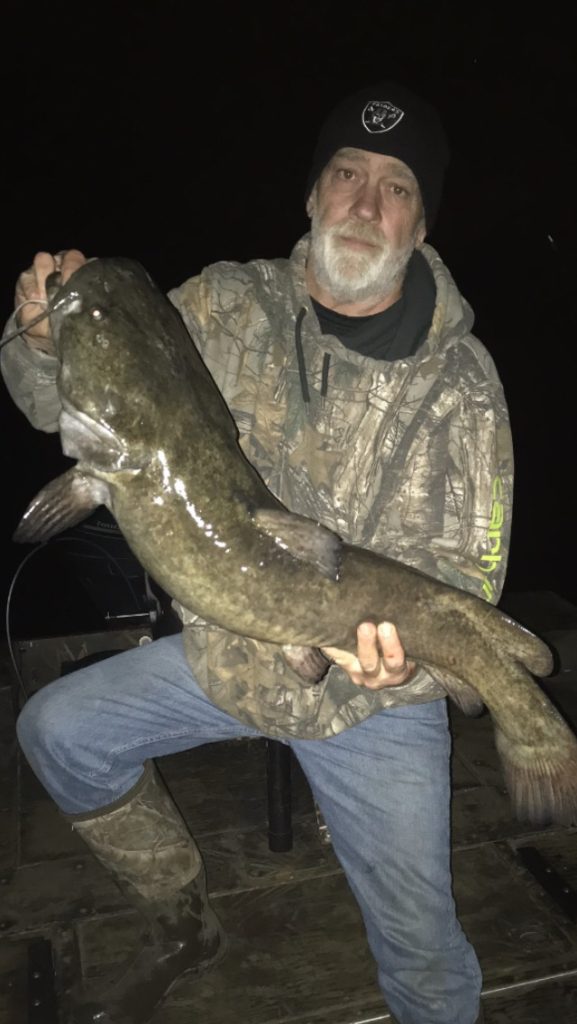 Can`t thank Dave enough for an awesome night and the experience of catching a River Monster Flathead!
Hope to have the pleasure of fishing with this great outdoorsman again!
We got back to the launch and Dave turned to me and said, “You got to learn how to use a drag a little better Ken,…..you were lucky as hell to land that Flat” – I smiled and said, “Didn`t claim that I was the best fisherman partner, but some say I`m the luckiest that`s for sure!”