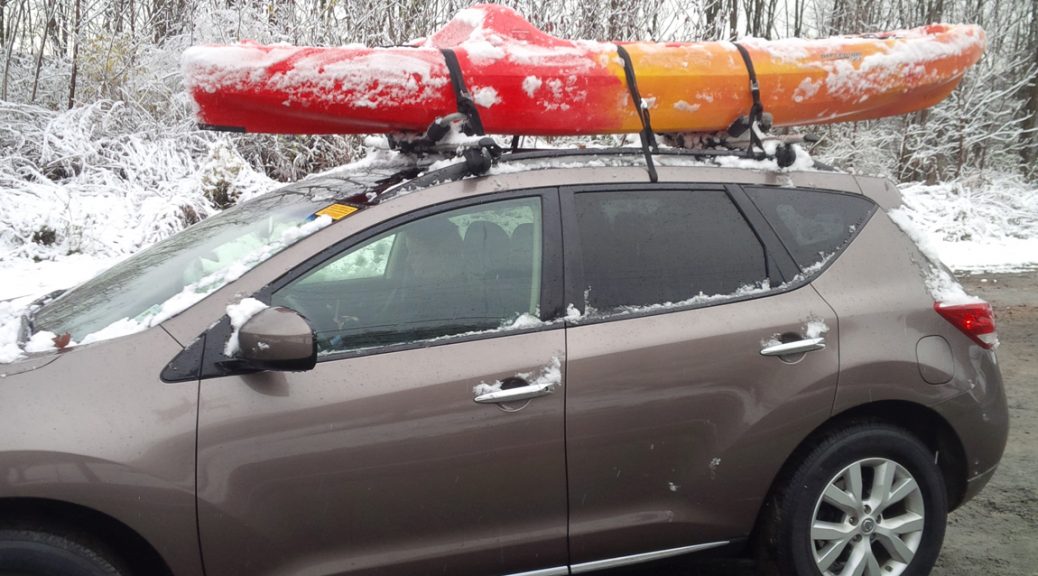 The weather forecast last Sunday, kind put a damper on my deer hunting plans. I woke up to about two and a half inches of fresh snow(which I love hunting in!) and up to forty mile per hour wind gusts(which I hate hunting in!) – So that kind of bagged my deer hunting plans.
As I took the pups out to pee, I looked at the trees out back swaying in the strong gusts……… then looked over at my `Yak covered in snow, smiled and thought, “Ahhhhhhhh…… why not?” –
“Hell….. I ought to be able to wrangle up something(long as I didn`t get blown out of the `Yak!)” I said out loud as I brushed off the snow and loaded her up on the Murano.
Figured it had been awhile since I went after that `ol toothy Esox…..the Northern Pike, so that would be my target of the day. So off to the Passaic River I went.
After arriving at one of my go-to spots, I quickly set up my gear in the `Yak and launched into the murky waters of the river. I started out working a Chatterbait on one rod and a Bomber lure on the other. After paddling and casting about for a good hour, I hadn`t even had a follow let alone a strike or miss. Fish definitely are much slower in regards to striking in the cold-water and believe me, I was retrieving at a snail`s pace trying to provoke a strike. But nothing. The wind was definitely more than just a little challenging at times. With the wind howling, I wedge the `Yak up between a “V” of a half-submerged small, dead tree, in order to hold me in the current.
Finally a solid strike and Fish on! Definitely felt like a nice Pike as I held the pole and attempted to paddle free of the brush, in order not to lose the fish. Wait…….. I just lost the fish. “God damn it,…. he felt good too”, I said aloud.
I decided to drift down river a bit………. And it wasn`t long…..BAM! Fish on! A really nice, fat 24 inch pickerel.
As I got the toothy critter closer to the `Yak, I could see the same open, red sores/lesions that I had seen two months earlier on another pickerel that I had caught at another location of the river. I have never seen sores like this on a fish. They were actually open-bleeding holes in the fish. I held it with my fish-grips never touching it as I removed the lure with need-nose pliers. 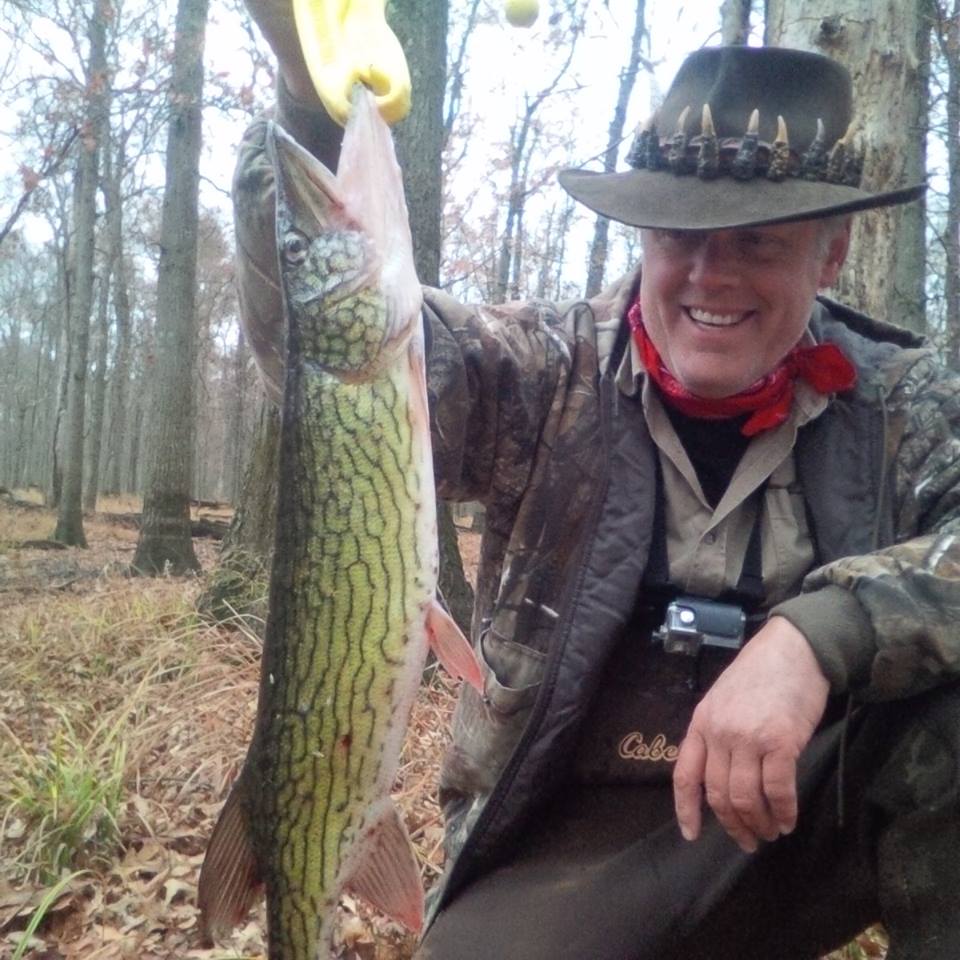 The fish acted healthy, vibrant and had great colors. Here are a few pictures of what I`ve been describing; 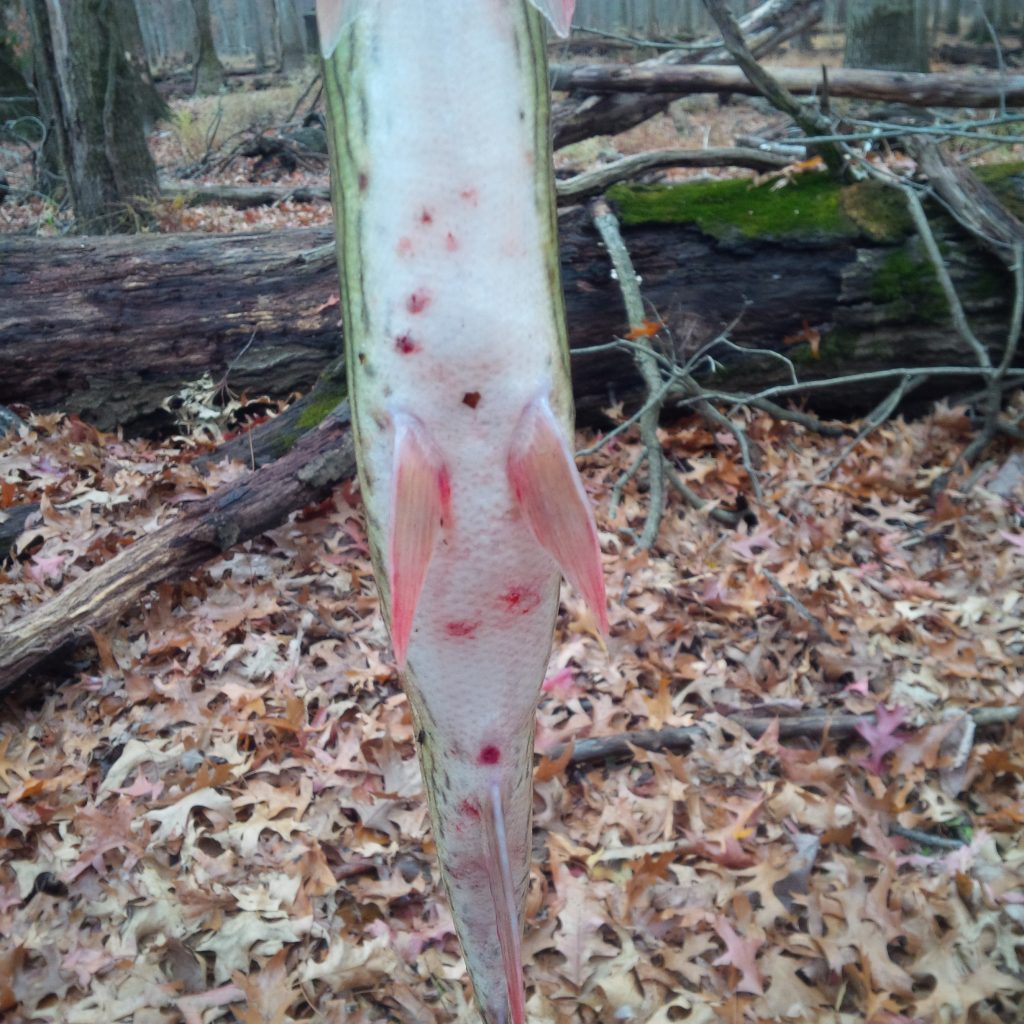 Obviously, some kind of parasite or disease has caused this, but only in the pickerel that I`ve caught in the last few months.
I kept fishing that afternoon, hoping to land a few nice pike…….. instead I caught four more pickerel! All very nice size and I certainly do enjoy catching any of the Esox family. 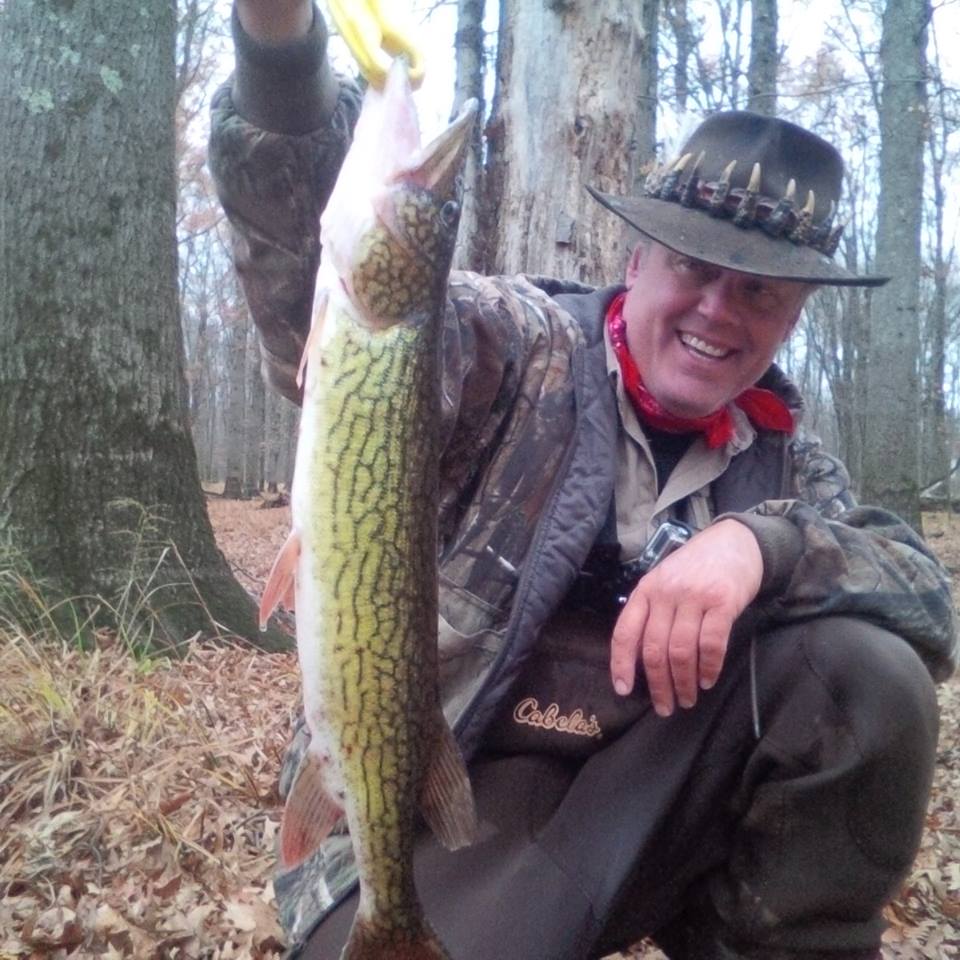 Here was another nice one that I caught in the `Yak.
Despite the very windy, cold conditions, it was a good day “Snot-Rocket” Wranglin` on the river indeed. Heck….. I had the entire river to myself too! Hmmmmmmmm…….. imagine that.
I reported this to the NJ Division of Fish & Game on Monday and sent them these pictures. They in turn, had the State Biologist call me to discuss this situation. He asked me to bring one to him in a bag, so they can do various tests and try figure out what is going on here. He wasn`t at all sure what was causing this or why it was only in the pickerel.
Till next time…..
See all of my Adventures here.