“Sometimes the night calls and taunts me into the darkness” –
Anyone that fishes out of a kayak will most certainly tell you how exciting it is. The thrill of landing that first fish in your Yak is absolutely awesome and will definitely have you “hooked” for sure.
However, I occasionally like to add another “twist” to my `Yak excursions…… The element of darkness.
To launch in the solitude of the night, by only the light of the moon, takes things to an entirely different level.
By the way, just for the record, I`m not advocating ANY beginners or kayak “newbies” to try this at all. It is entirely a different level of kayaking and can be dangerous obviously.
So last night I got that “itch” and decided to scratch it at 11pm, loaded up the Yak and trekked off into the darkness. I also wanted to try out my new lucky charm that Sharon brought back from her trip to New Orleans last week. A very cool Voo-Doo Gator Claw rope necklace that the `ol Cajun Lady told her would bring me good luck and help me get my “MoJo” on when I`m fishing. 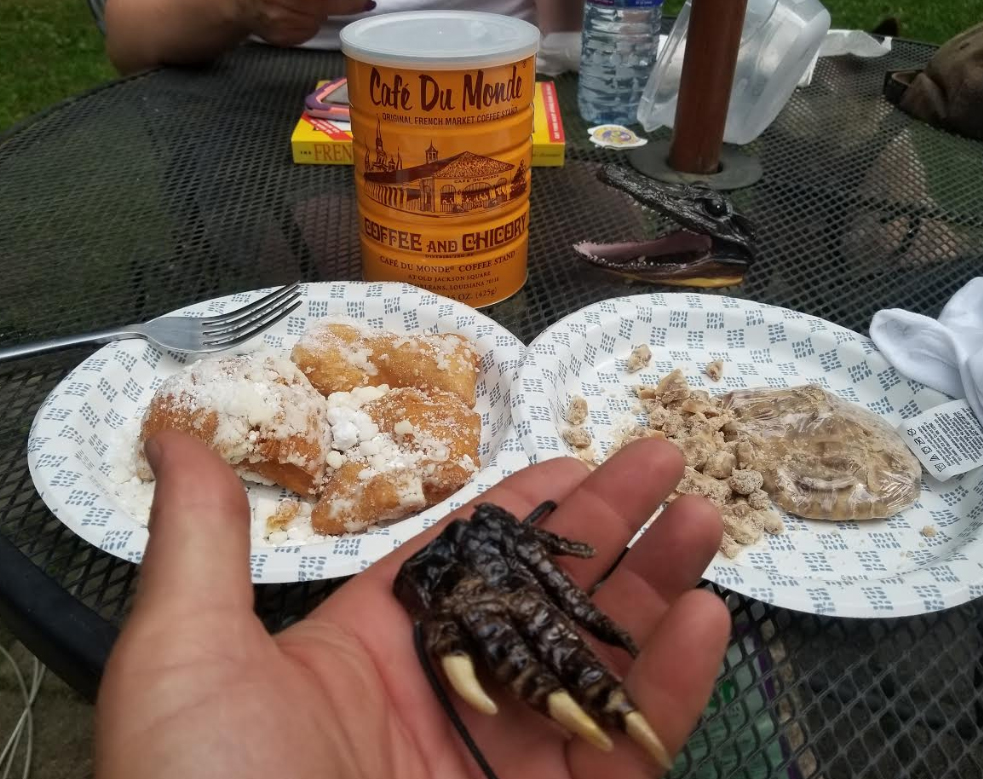 The air temperature read 57 degrees in the 4Runner as I launched the Yak just before midnight in the peculiarly cool, August night air. I took two set-ups; a baitcaster and spinning reel as well. While I prefer to use a baitcaster reel, I always bring a spinning rod set-up in case I get a really bad birds-nest out in the dark. Remember…… I use no lights when I do this. I use a top-water Booyah Jr. Frog and a top-water mouse as my night time lure arsenal.
I paddled through the thick vegetation, strategically glancing for openings against the moon glow on the water. I began working the frog and on the third cast had a blow-up…….. and missed. When you work a frog in the daytime, obviously it`s all visual, however at night, you have to use another sense as well…….your hearing.
Working the frog, I changed my retrieve to a much more subtle, slower twitch-retrieve action. I watched it closely as it skittered across the dim lit, dark water…….BAM! Fish on! I landed my first Greenback of the night. 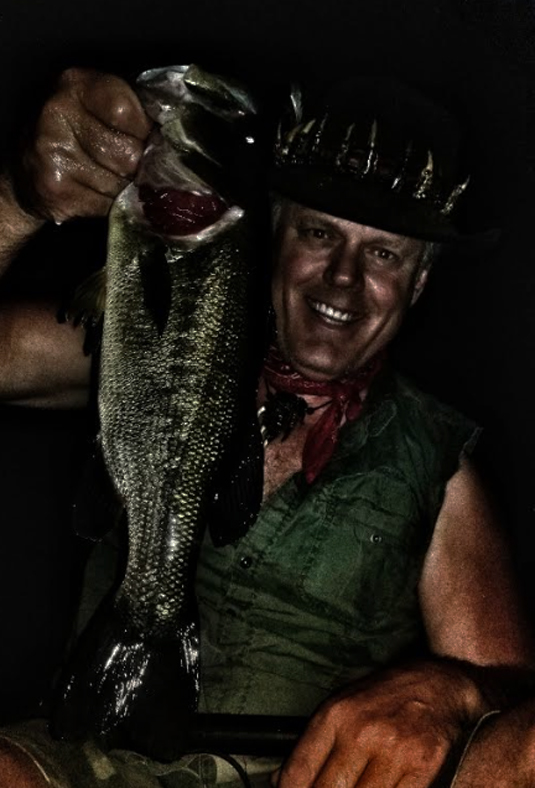 At one point, I heard a couple of coyotes howling off in the distance. Yes the night was indeed very peaceful…… maybe even with a touch of eeriness in the air.
I continued to work my away around the lake, searching for brush and blow-down silhouttes, as I tried to keep my bearings in the dim light. Shortly thereafter, I worked this small cove with the mouse on the baitcaster set-up…….. BAM!! What an explosion! Fish on! And a Hawg at that! This felt like a solid Bass indeed so I went for the net and scooped him up. Too bad my night time photography skills weren`t up to snuff though! hahaha! As I cut a big part of him off! 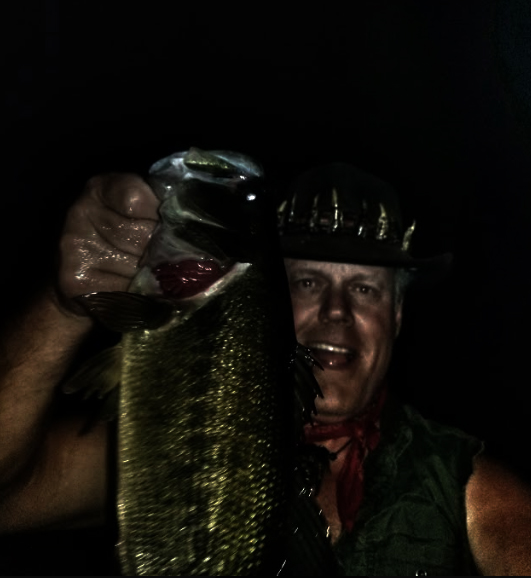 *I have huge hands…. look at the size of the head compared to my big “paws”! Damn wish I could`ve gotten a better picture!
While I can swim like a mink, I also should note this, I sit on two PFD cushions and also had on a small Onyx M Series Belt Pack Manual Inflatable Life Jacket(Amazon; $56) – 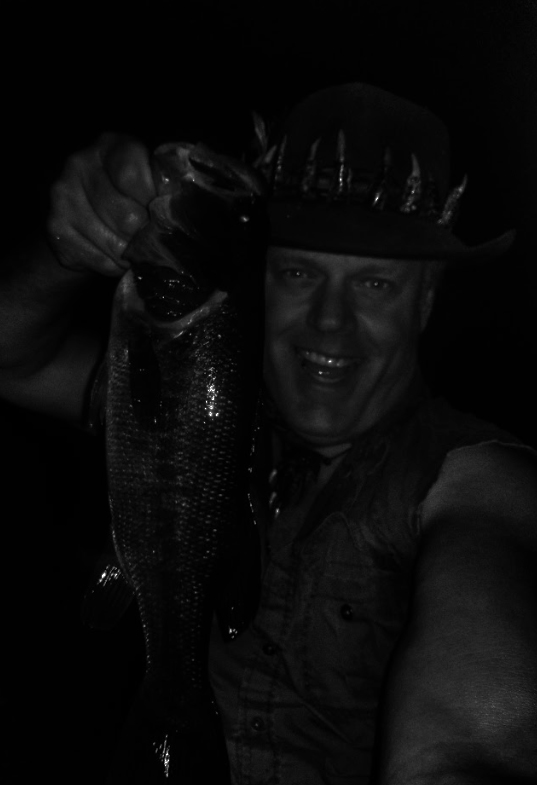 The fine night of fishing continued as I landed yet another nice Bass on the frog
One more Hawg capped off the night at 2:45am…….(And once again, my pictures skilled need honing for night time!) 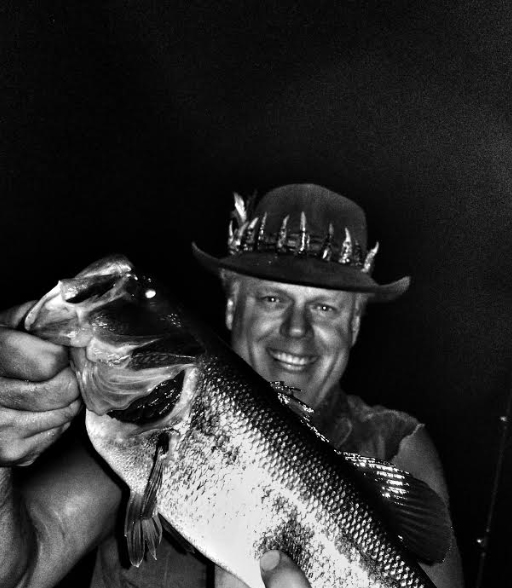 All in all, a fine night chasing Greenbacks under the moonlight in my Yak. Please be very careful if you venture out and choose to try this.
Thanks for checkin` it out!  Ken-
Till next time…..

2 thoughts on “Moonlight Bass bustin` at Midnight in my `Yak”