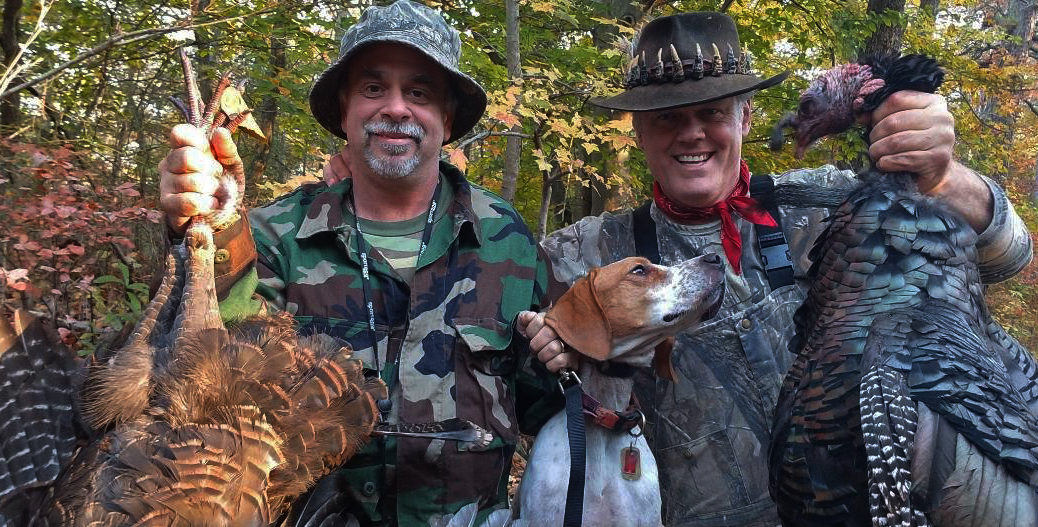 After discovering the excitement of Fall Turkey Hunting in New Jersey last Fall, through my friend Nick Dalasio, I am absolutely thrilled when this one-week-only season rolls around! Nick graciously offered to bring his incredible Turkey Dog “Maizy” up my way last Thursday to have a go at some Thunder-Chickens around Pequest WMA. So I took the day off and was was more than excited to go!
Now here`s the thing that`s sort of interesting about Fall Turkey Hunting. Almost everyone that I run into while Fall Turkey Hunting up around here, does not have a clue about this type of hunting whatsoever. And everyone one is generally surprised when we tell them what we are hunting turkeys with a dog. The usual question goes something like this……..”Dogs?…..Is that even legal?”  – It is indeed and you are allowed to shoot gobblers, hens, poults…. any type of turkey during this short-lived Fall season.
We made our first walk way out on the top of WMA where I had consistently seen birds in the Springtime. Maizy started acting very “birdie” as we hiked in. Nick explained that more than likely, she was on old scent but that there had been turkeys here recently. After walking out and about for a couple hours without locating any birds, we decided to move to a different location.
I suggested that we go into the southern end of the WMA tier and try that. As we trekked through the fields and hedgerows, it wasn`t long before Maizy started barking! She had found birds and was busting up a flock of turkeys! Within minutes, she came back to us and we proceeded to go to the area via Nick`s GPS and Maizy`s tracking collar.
We got in position and sat up for an hour before Nick started calling the birds with his Kee-Kee call. See in the Fall, turkeys flock up and once you break up the flock, eventually they will want to get back together and usually come back to the spot where they were broken up.

Hunting Turkeys in the Fall, has to be just about the most exciting ways that I have ever hunted in New Jersey!
We sat for two hours…….nothing called nor came back in. Nick figured the entire flock more than likely, flew away together and didn`t scatter in every different direction. Hence wherever they had landed, well they were obviously all together because they didn`t break up as a flock. And that happens.
By this time it was late in the day, so we checked out one more spot to no avail and decided to call it a day. As we walked back to the truck, a guy popped through the hedgerow and said, “Hey….how you guys doing? Gettin` any rabbits?” – I started laughing and said, “See Nick? No one has a clue up here what we`re doing!” – then I proceeded to explain that we were Turkey Hunting. He couldn`t believe it, “No kiddin`…..with a dog huh? I never heard of that” – So we all introduced ourselves and I said, “I believe your my friend on Facebook”- He turned and said, “ohhhhh what`s your name?” so I told him and he goes, “I didn`t recognize you without your hat Ken!” – Then he called over a younger fella who was heading out to hunt and told him who I was and turned out that we are all friends on Facebook! Dennis kindly showed Nick and I all around and took us up in his awesome “condo-treestand-house” – holy cow! You could actually live in this thing! Dennis and Corey were really nice guys and it was really nice to meet them in person.
On that note, our day ended. The next plan was for me to drive way down into South Jersey to meet up with Nick on Saturday, the last day of the season.
The problem was the forecast, as they were calling for a very windy day on Saturday. Sounded actually like it would be bust to even hunt. But it was the last day of the season, so we had to try. And while it certainly was windy, it didn`t seem as bad as they had forecast. We hunted quite a few different areas throughout the day and Nick was very surprised that we didn`t find nor even see any turkeys all morning. In the afternoon, as we hiked an area, Maizy broke into a bark that didn`t last very long. Nick surmised that it may have only been a couple birds, not a flock. He turned to me and asked, “What do ya think? Do you want to set up?” – I replied, “Well it`s 1:30 now, if we set up and burn a couple hours, we might just be wasting daylight as I kind of think it`s a gamble for just a couple birds don`t you?” – Nick agreed so we passed on setting up with the hopes of locating a flock.
As it got even later in the day, I said jokingly at one point, “Well….looks like I`m gonna have to buy a Butterball this year Nick!” and he laughed and said, “You and me both” –
Then at around 3:50, something happened. Maizy got into a decent flock and really busted them up! We quickly sat up…It was like we were in the “Bottom of the Ninth, bases loaded and with two outs”…….. it was now or never…. or until next season to get our Fall Turkeys.
He started masterfully working the Kee-Kee call at 4:45pm……. by 5:15 a Long-Beard came cautiously within 30 yards of me. I slowly shouldered my Browning A5 and took out the 21lb Gobbler!
I didn`t move as Nick had instructed me to sit tight if I shot, because other turkeys would more than likely be coming back as well. And boy was he ever right.
I guess it was around 5:40, when Nick`s gun cracked the cool Autumn air…….Bang! Another turkey down! And a kind of “Rare” one at that!….a Bearded Lady! Yep…. a Bearded Hen Turkey! What a way to end the day! The last day of the season and the last day of Daylight Savings Time had offered us enough light to get `er done!
A mighty fine Fall Turkey Hunt indeed, with a great friend and his great dog. Thank you very much Nick and Maizy for an awesome Adventure! 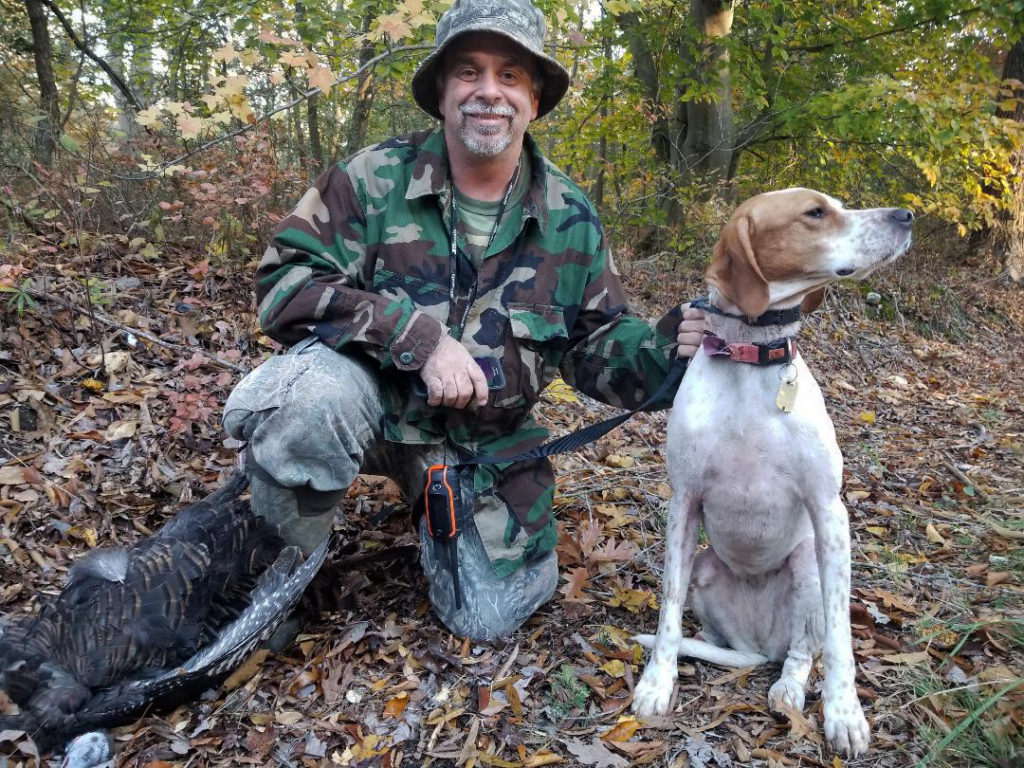 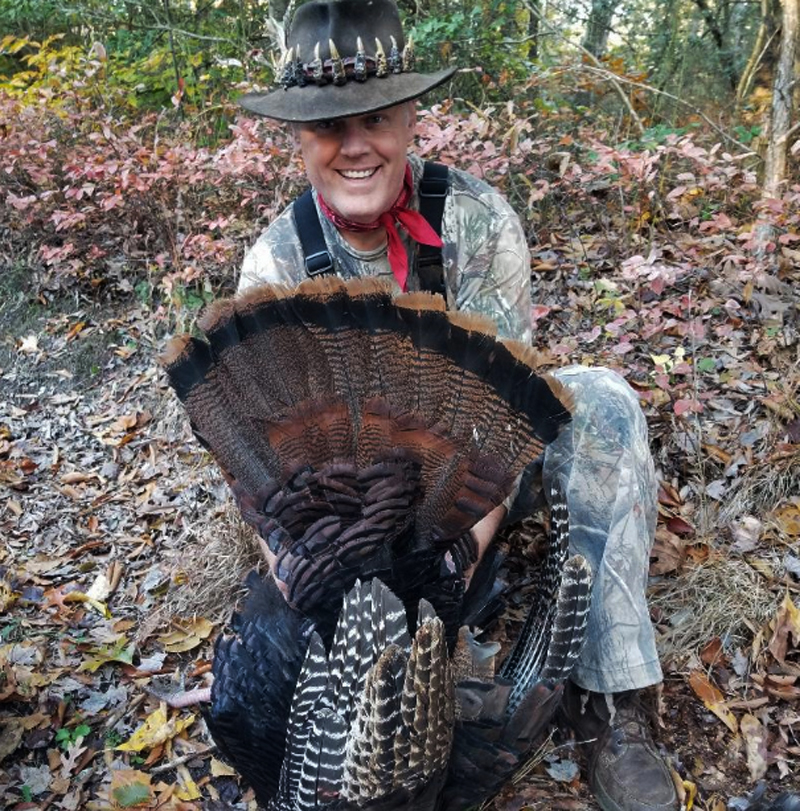 Till next time…..
See all of my Adventures here