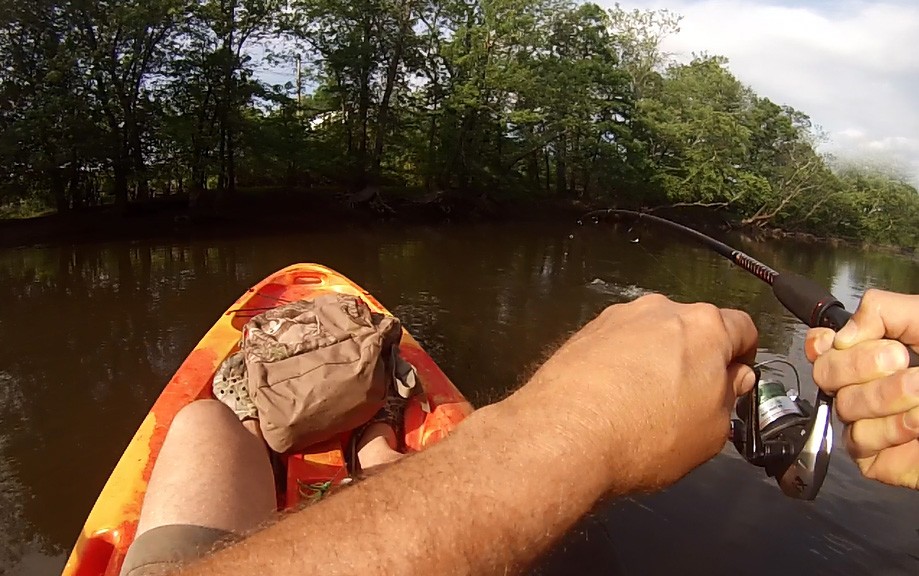 After knocking out some of my chores/projects around the house this past Saturday and Sunday morning, I
decided relax a little and have a go at it Sunday afternoon on the Passaic River in my `Yak.
So as sat on the patio table out back, studying my map of the Passaic River, I mapped out a new destination to try. The last adventure worked out pretty well, as I paddled upstream and fished my way back down to where I launched and parked my truck. Now I told Sharon I`d be home around seven that night, so the tricky part was calculating just how far upstream to paddle, in order to be back at the truck by six-ish, in order to make it home by seven(or so). What complicated this a tad more, was the fact that this adventure would once again, take me into new territory. 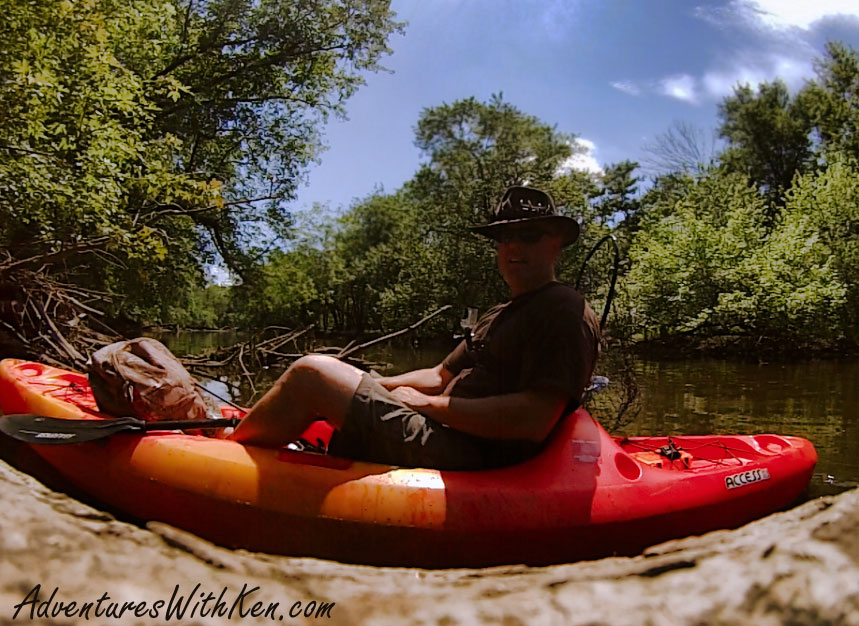 Arriving at my new destination, I got my `Yak in the river and just soaked in some of the beautiful, sunny Sunday afternoon weather before headin` upstream. The river was a bit higher than normal and a tad “murkier”/discolored than I was used to seeing. 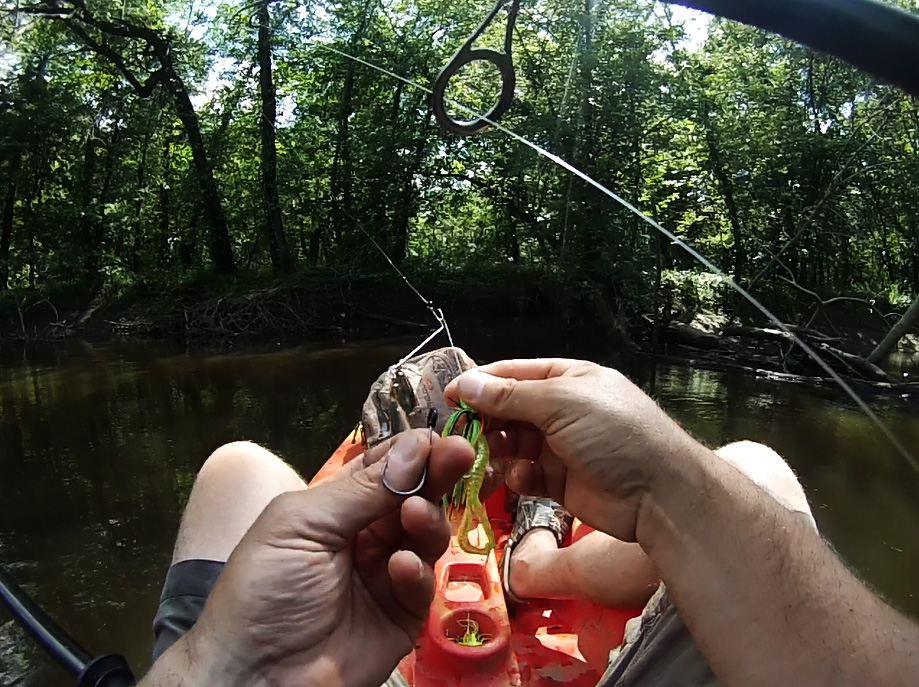 I tied on a fave combo, an `ol Firetiger Spinnerbait with a double-tail Chartreuse Twister Tail. Which also had a little something “extra” attached. My Canadian friend Nathan Robinson showed me this when he was down here a few weeks ago.
A “Trailer-Hook” –
This Trailer Hook will definitely help raise your odds against fish swatting the Twister Tail and missing the hook!
I paddled upstream a good two and a half hours, then started fishing my way back down the Passaic. Found some absolutely awesome looking pools, but after a couple hours of fishing, not a strike or even a miss. The pike just didn`t seem to want to cooperate on the gorgeous, hot sunny day.
By now it was getting later in the day and it looked like I was going to get skunked, as I was only about three hundred yards from where I launched. What to do, what to do……… I felt like it was fourth and long and I was at the two minute warning. We needed a “Brett Favre Gunslinger move” and we needed it now! ha! ha! As I rifled through my “bag-of-tricks”, I pulled out my old faithful “Clown Bomber” Lure that I caught that Tiger Musky on a few months before. “What the hell?” I thought, “Let`s give it a go!” 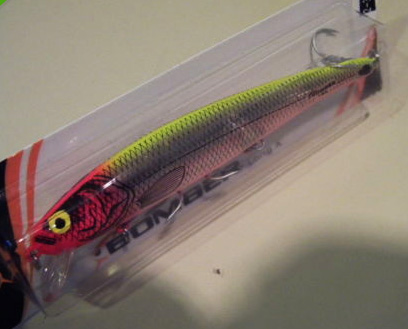 This is the exact color combo “Clown Bomber” that I used. Like I said, I nailed a Tiger Musky with it a few months back. Would/could there be any “magic” in the Bomber now as my time on the river was fadin` fast?
First cast……nothin`. Second cast with the Bomber and BAM! Fish on! And a good one at that!
Crank up your speakers and watch this short Video of the day`s NJ Fishing Adventure:
What a way to end the day! Wranglin` up a beautiful 5.8lb. Largemouth Bass! Guess the `ol “Gunslinger” had it in him that day on the river – 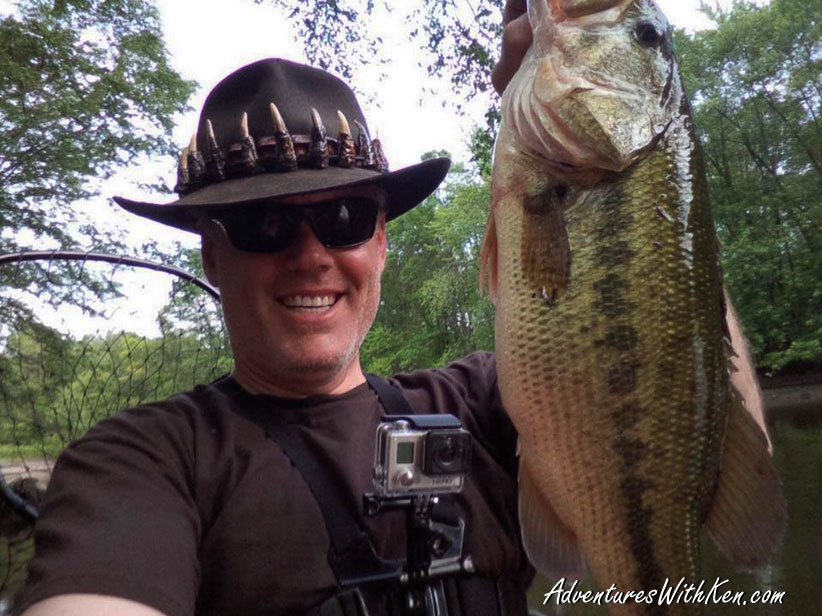 I am available for Guiding also if you`d like to have me join you on a NJ Fishing Mission, simply write to me on my site; www.AdventuresWithKen.com and we can discuss and arrange everything.