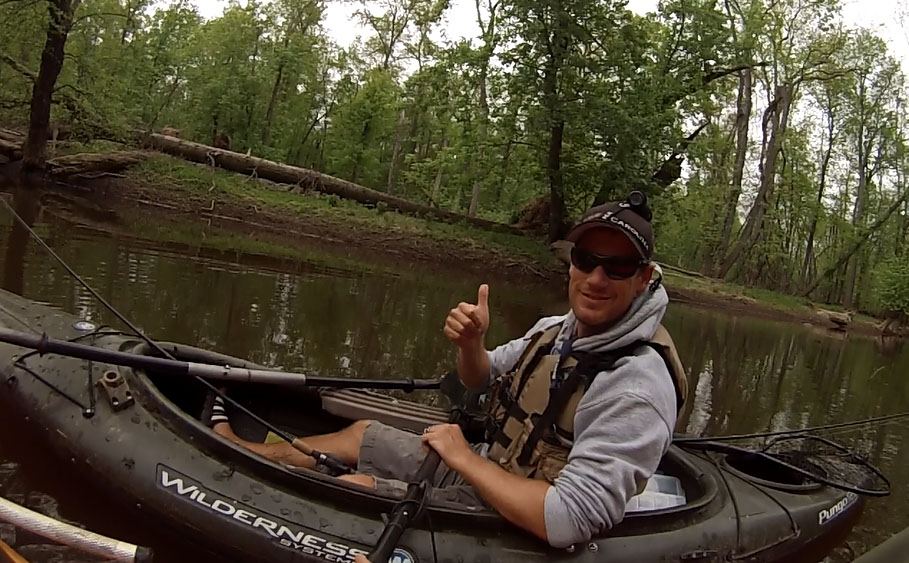 Well our NJ Pike Fishing Adventure this past weekend was nothing short of yet another excellent fishing excursion with a gentleman by the name of Nathan Robinson from New Brunswick Canada. 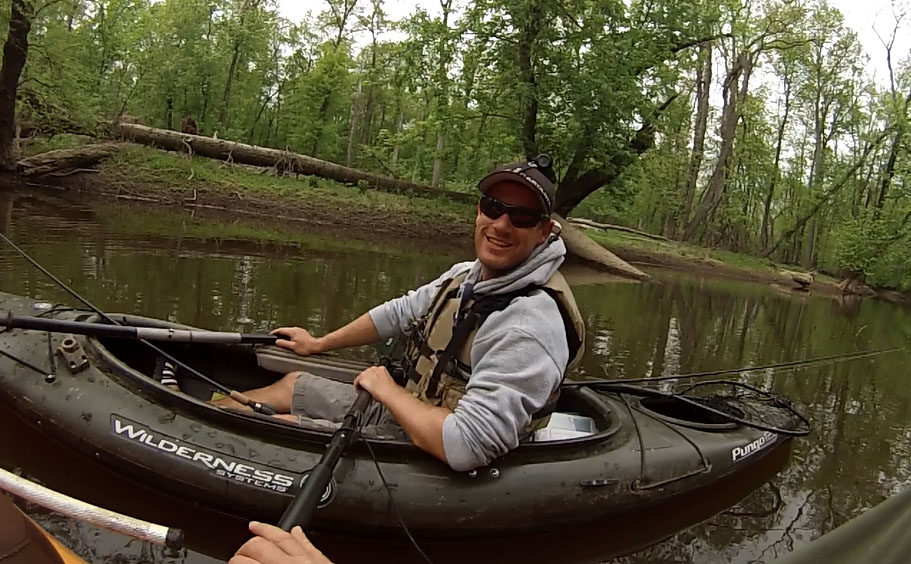 Nathan found my website three months ago, as he was “Googling” NJ Pike Fishing and reached out to me me through the site. He explained that he was coming down to New Jersey the first week in May and wanted to fish for northern pike, as he had never caught one simply because there aren`t any pike in New Brunswick. Quite frankly I was surprised that there aren`t Pike up there. Heck my Step-Father & I traveled up to northern Ontario for eight years fishing for smallmouth bass, walleye and of course, northern pike. I really thought they were everywhere in Canada. Hey you learn something new everyday right?
Being an experienced kayak fisherman, Nathan liked the idea of chasing those pike in the Passaic in the `Yaks. He has quite the kayak set-up(see pics below) at his home in New Brunswick. 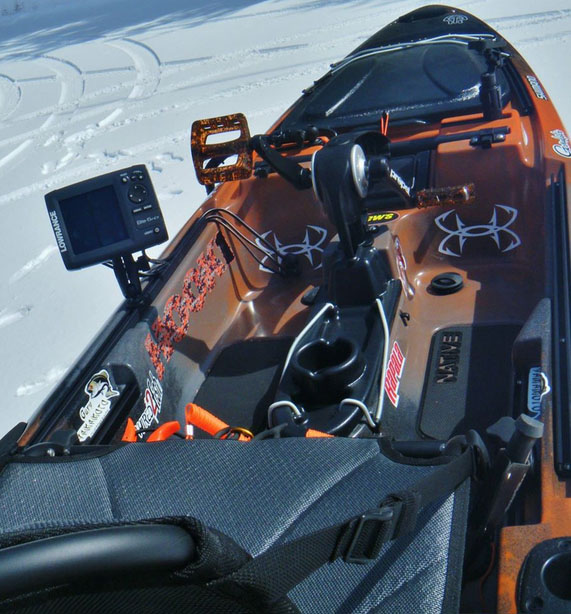 Notice it`s a Pedal-Driven Kayak. An extremely well-equipped, very professional-looking vessel, I must say.
Quite the `Yak indeed!
Initially he planned on bringing this elaborate kayak to New Jersey, but decided not too, as it probably wasn`t a good idea to have it sit on top his vehicle all week as it might`ve “grown legs” and disappeared. So the next option was to rent one while he was down here. I myself, wasn`t really sure where to rent a kayak, as everything I found on-line was in South Jersey. I thought, “Ahhhhh what the hell……I`ll ask the question, where to rent a kayak on the NewJerseyHunter.com forum. Well what happened the next day was incredible………. I got a response and the subject said, “Ken…why rent?” I thought, “Great….someone wants to sell me their kayak”. I read the message and was shocked at what it said, “Hey Ken…don`t rent one, I`ve got a kayak that you can use”….WOW! I thought. This gentleman who is a complete stranger to me, graciously offered to let Nate use his kayak! He proceeded to give me his address and said it would be out by the pond and to help myself to it and no rush to bring it back. Wasn`t this an incredibly nice offer? An act of pure kindness…….The kind of gesture that restores one`s faith in humanity as my friend Lisa put it. 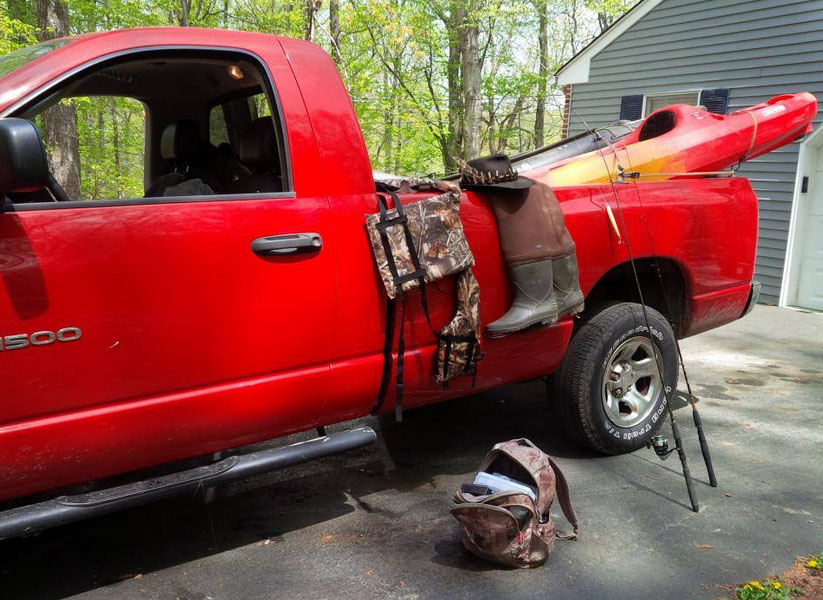 I threw the `Yaks in the bed and loaded up my gear and headed east to meet up with Nate on Friday. Nate was pretty darn excited to have a `Yak to fish the river in and my goal was to hopefully get him into a few pike out there. 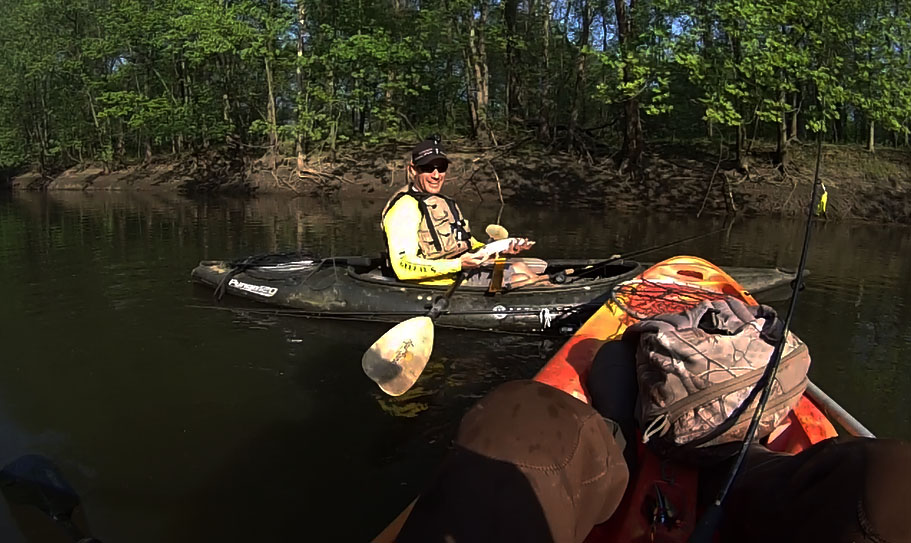 Nate caught his first pike that afternoon. He said, “Well this is what I came for,….at least I caught a pike….I`m satisfied” –
But I wasn`t,…… as I wanted to get him into a decent size pike. With paddled back to the lot at dark that night and talked about where to fish on Saturday. We decided to meet twenty miles away from this location, at 7am the next morning.
Then it was Saturday………. and then the Adventure kicked in! 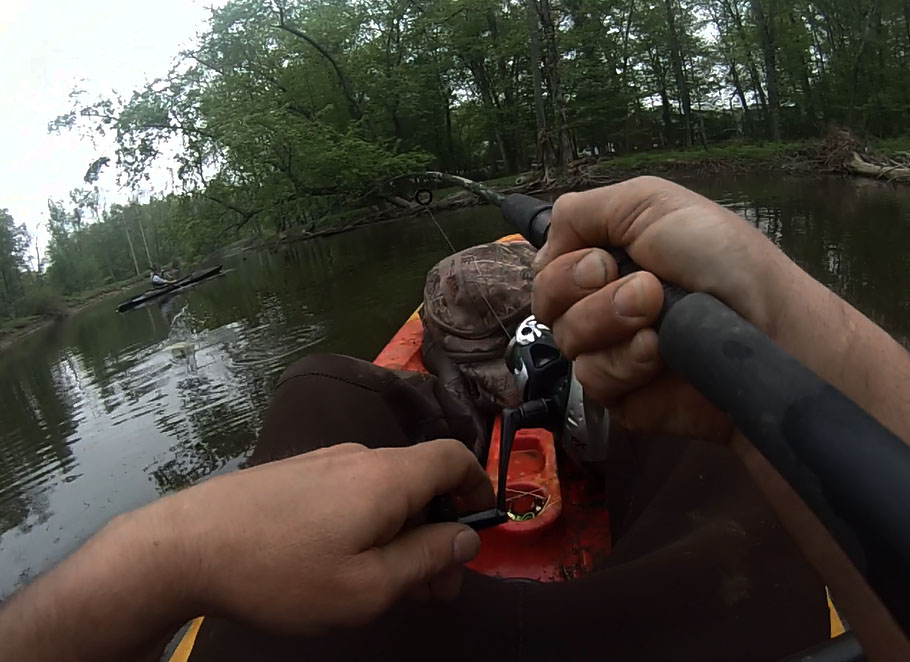 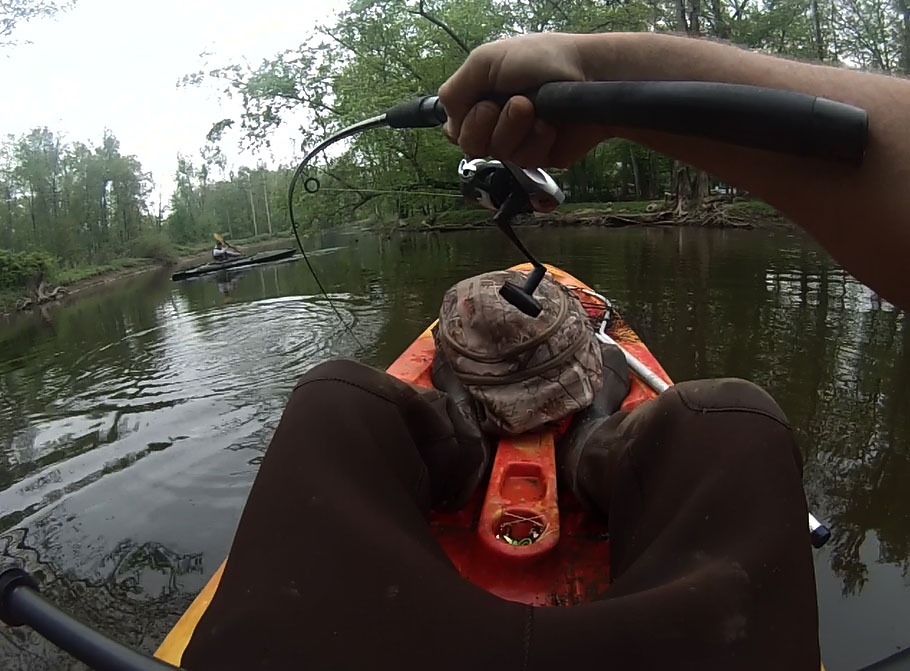 Wasn`t long until we were into some nice-size pike on the Passaic on the cool, cloudy day! 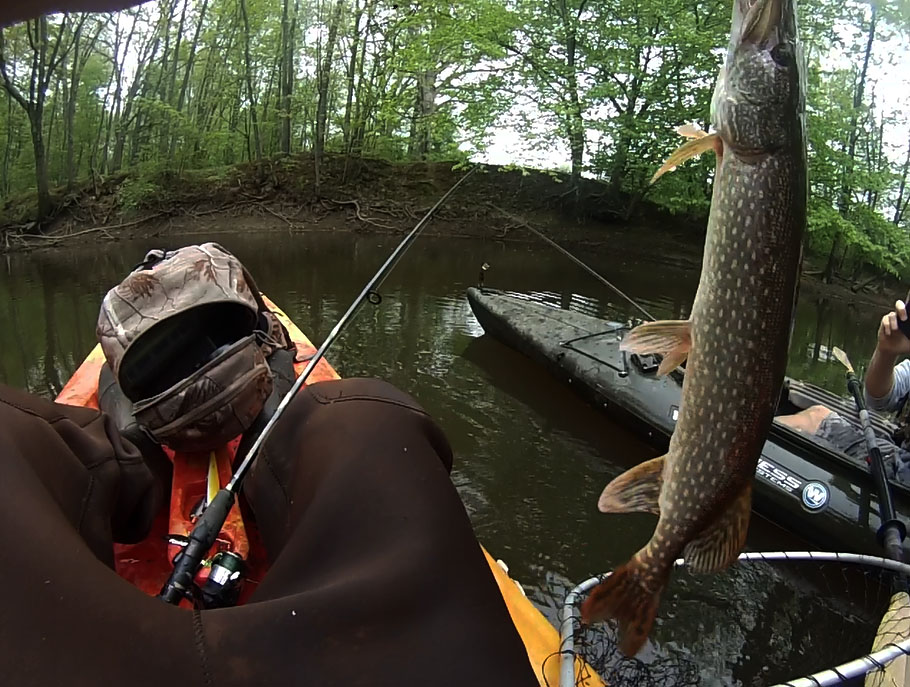 Nathan caught two beautiful pike that afternoon! One was a tad over seven pounds! 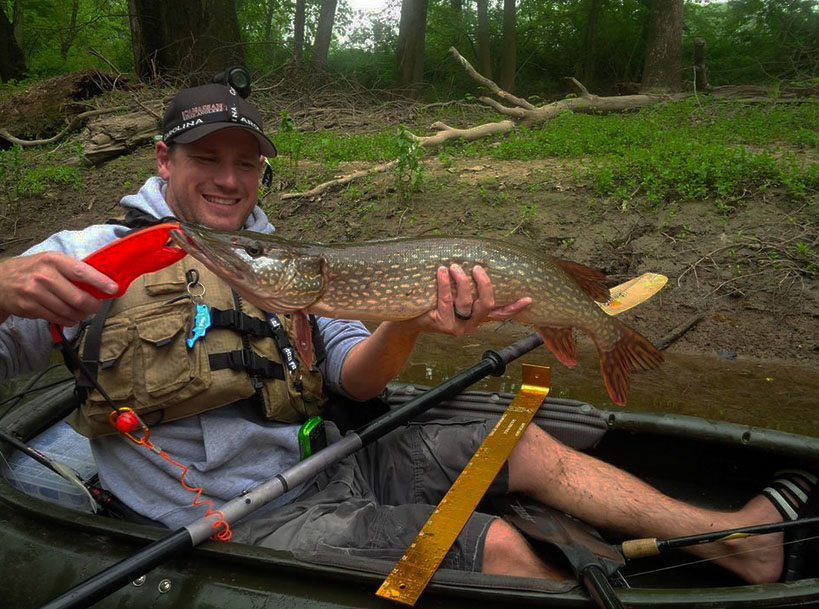 Watch the Video of our Pike Fishing Adventure on the Passaic River! You`ll enjoy this one! 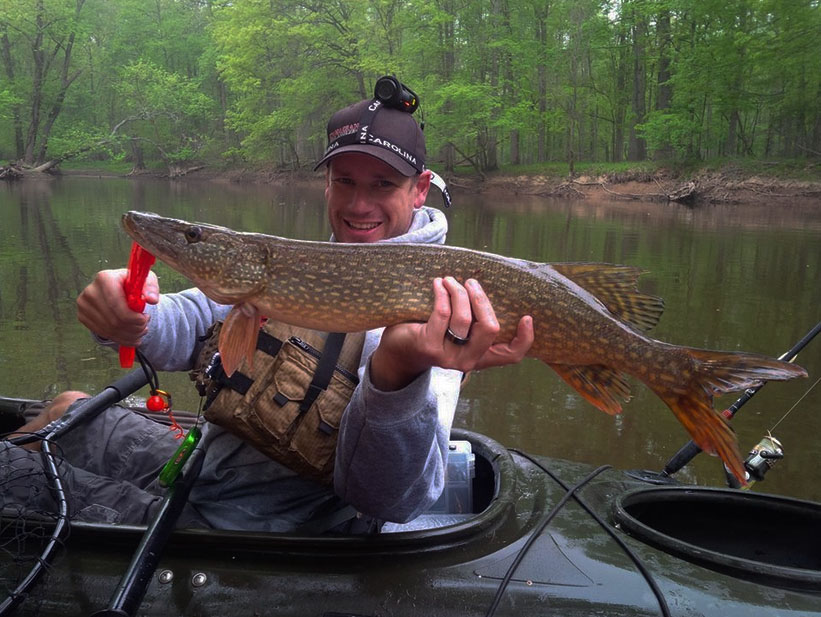 I do indeed believe this Pike Fishing Adventure left quite an impression on my new Friend from New Brunswick Canada.
Good Friends and Good Fishing…………
It doesn`t get any better.
Ken- 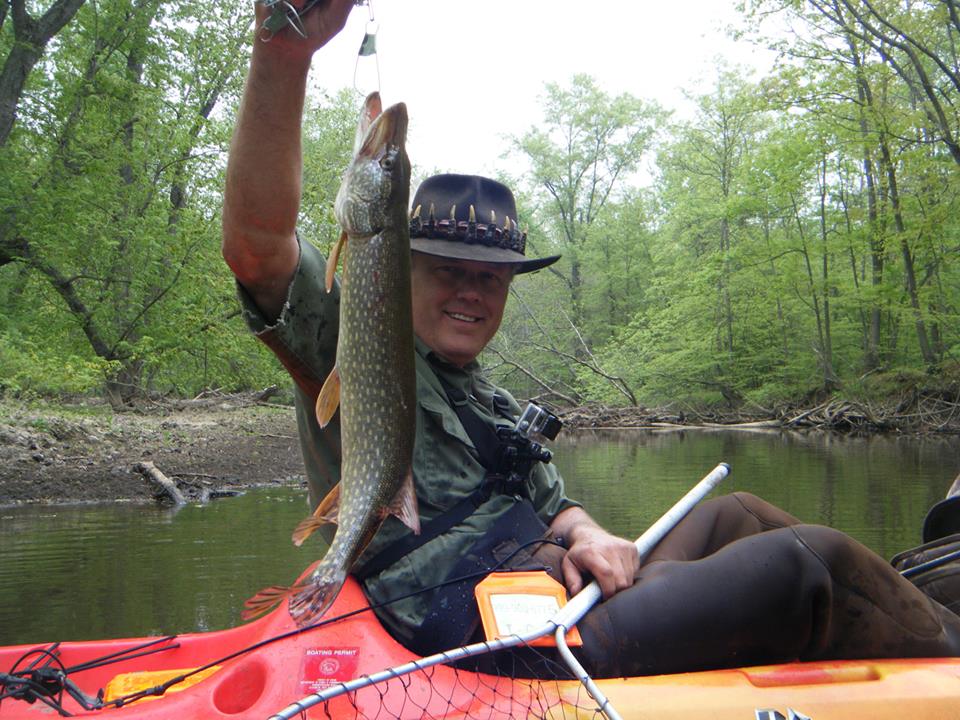