When the discussion came up a few days before, about the possibility of hitting the “Hard Water”, well let`s just say it was pretty much a one-and-done answer…… Of course! Ice Fishing….this fine Wintertime activity, that I was introduced to by my best friend Curt thirty years ago, has remained one of our favorite things to do even in our mid-fifties. So we made plans to hit the ice after I did a little scouting for safe “hard water” –
I called Curt up the night before and said, “Yep….. looks pretty thick in the lake yet. Come on up to the house at 10am tomorrow morning and we`ll give `er hell” –
2
Ahhhhhhh…….I thought it seemed thick. Boy……was I ever “off” on this scouting excursion!
We pulled up to the lake and both got out of the truck. I grabbed my auger and as we walked out, Curt said, “Well….it seems “ok”…….not really sure it`s as thick as you think” – With that, “I replied, Ahhhhhh it`s a good four or five inches”  – Him, “Drill a couple holes” – I don`t think I made eight cuts and whooooosh, I was through! – “Wow….. it isn`t that thick at all” I stated. Curt said, “Don`t stand too close to one another or we both might be taking a dip!” – I bent down and stuck my middle finger in the icy water along the edge of the hole I had just cut. “From the tip of my finger to the middle joint, is how thick it is Curt” –
1
Curt shaking his head said, “Yea…..we`re on probably two and a half inches of ice ya dummy!” Now me trying to “make lemonade out of lemons” replied, “Well I don`t think it`s too deep if we fall through Curt…..maybe four feet deep or so” – With that he dropped a weight on a line to test my “depth calculations” – “Ummmmmmm more like twelve feet deep Ken!” – Curt said this was the thinnest ice he had ever been on.
Me trying to lighten up the situation said, “Ahhhhhhhhhh the hell with it, let`s cut a bunch of holes and fish buddy-boy!” –
1
And that`s exactly what we did. I eagerly cut way too many holes as usual, while Curt set up the tip-ups.
I started jigging as he sat up the last few tip-ups and shortly thereafter, I yelled, “Got one Curt!” as wrangled up the first crappie of the day. 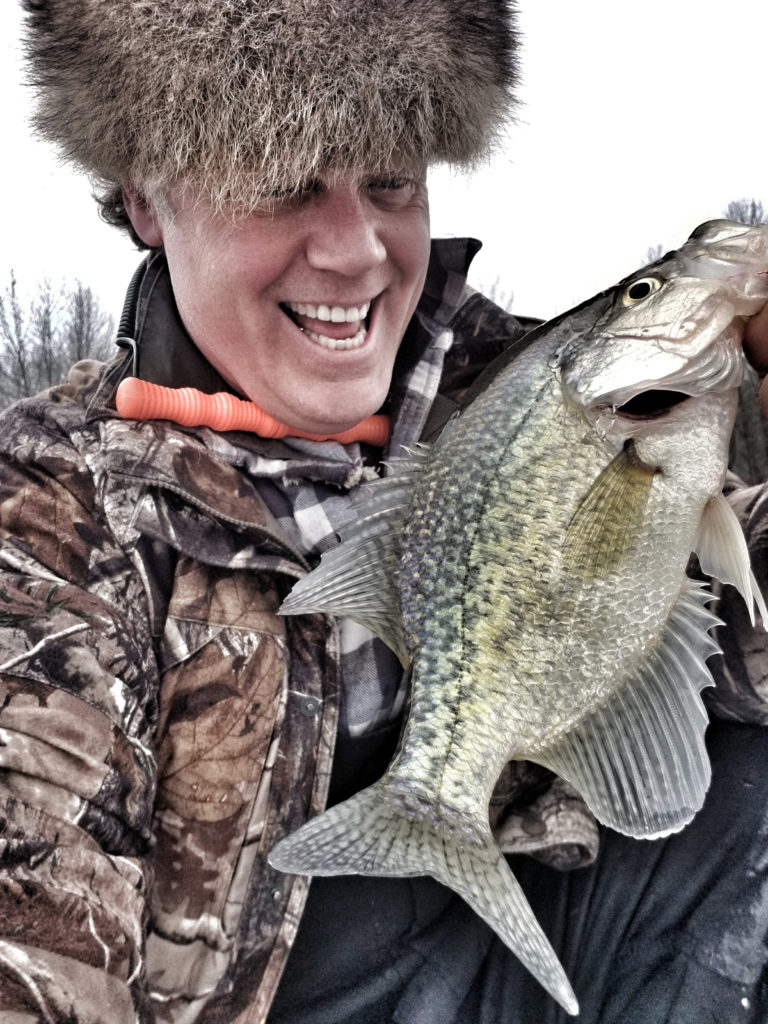 Curt started jigging shortly thereafter and warned again, “Look at the water coming through these holes already. Do not stand too close or as I said, we will be getting a wet ass!”
Minutes later, we had our first flag of the day! Curt yelled, “Go ahead! Take it!” and with that, I hustled along the ice to the tip-up. The fish had ran off just about all of the line, as I bent down to grab the tip-up. As I felt the limp line suddenly shoot to my left, I snapped back and set the hook! Fish on! In a few moments, I landed a nice, Large-mouth Bass on the ice! Snapped a picture and released him to fight another day.
1 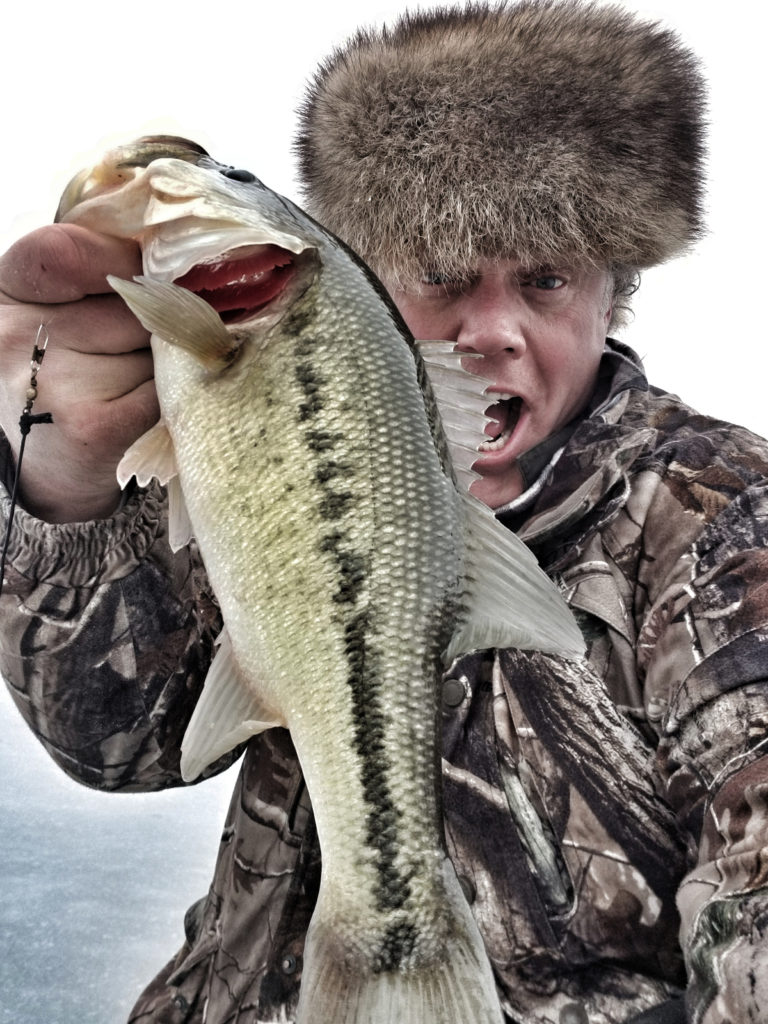 Then Curt jigged up his first crappie of the day right after that. 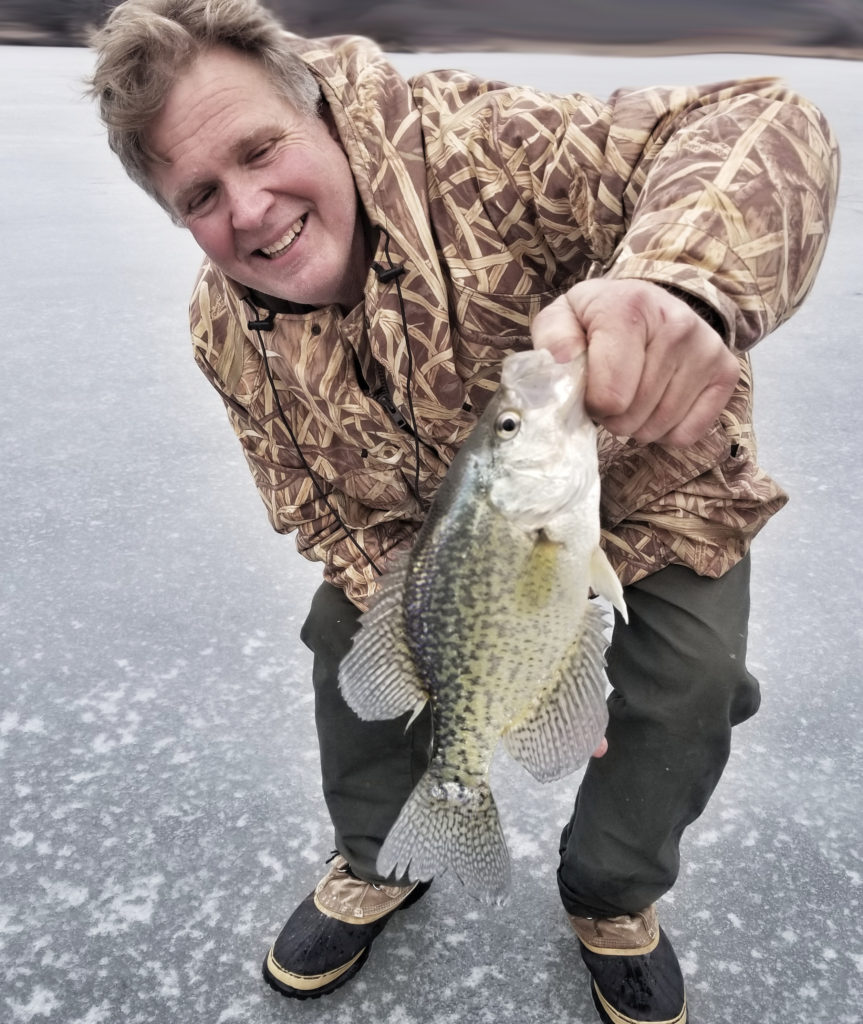 We had really solid action for a few hours, landing a some perch, and few more crappies. I had the “hot hand” for the tip-ups that day as I wrangled up a few really nice size “Greenbacks” through the ice. 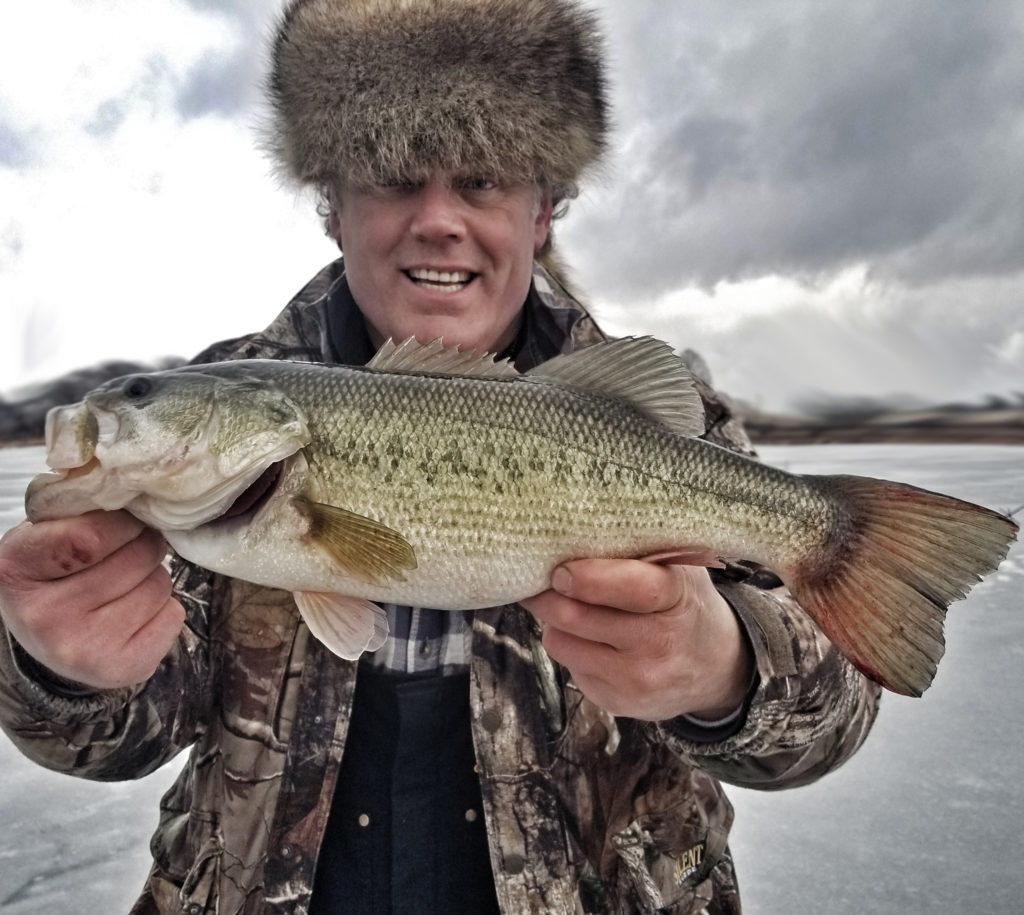 Then in the late afternoon, it started getting a lot colder and snowing/sleeting really hard and we were about ready to call it a day. One of the flags popped pretty close to the shore-line. Curt said, “Go ahead and take it!” – When I got to the hole, the tip-up was pulled off to the side and all of the line was off the spool! I quickly bent down and carefully raised the tip-up off of the ice……..and the line went slack. By now, Curt was standing near me and I said, “Damn it…… it`s slack…. I think he dropped it”- As I held the line, I felt an ever so light tug…….. then the fish started running wildly in circles! I quickly jerked the line and set the hook! Fish on and a good one at that! As I retrieved the line, again it went limp……..”I might`ve lost him” I said.
3
But I was wrong! As the heavy fish dove straight down towards the dark, murky bottom at this point! As I slowly worked the line in closer to the hole, we suddenly saw the football shape flash right under us through the ice! Wow! What a beautiful 21.75 inch Bucketmouth I landed on the ice! What a way to end the day!
1 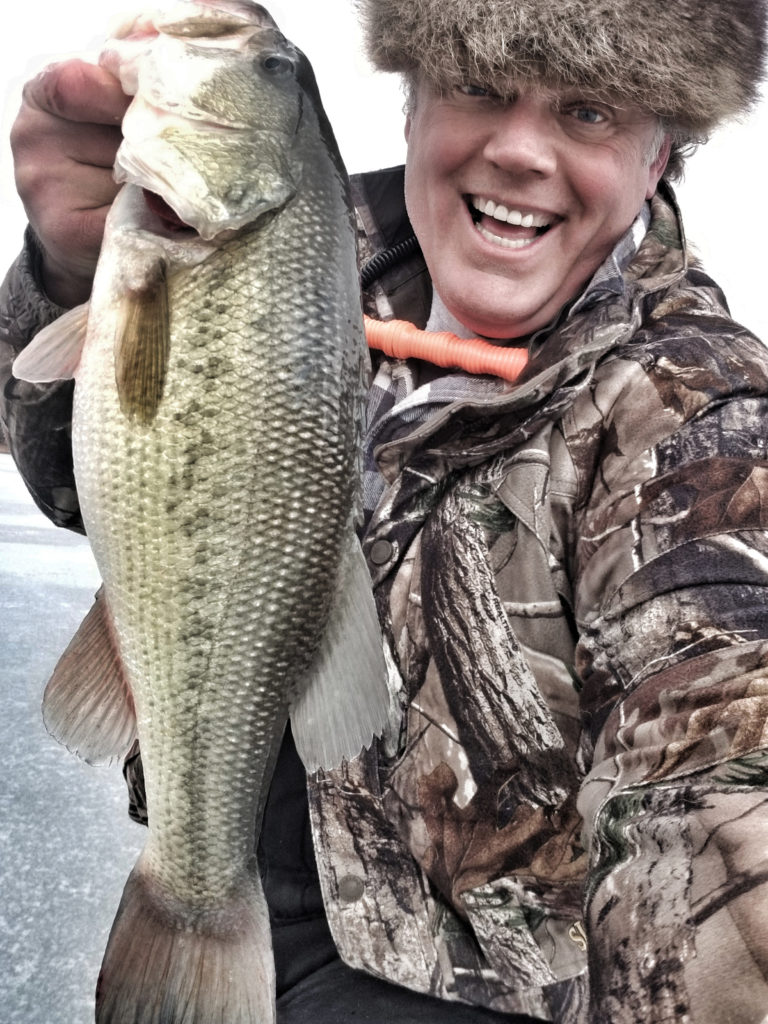 While we may not be as agile and are a lot more cautious on the ice, compared to when we were in our twenties, Curt and I always manage to have a good time. And that`s what good Friends are all about.
Thanks for reading about our Adventure on the Ice. G`nite~
Ken-
See all of my Adventures here