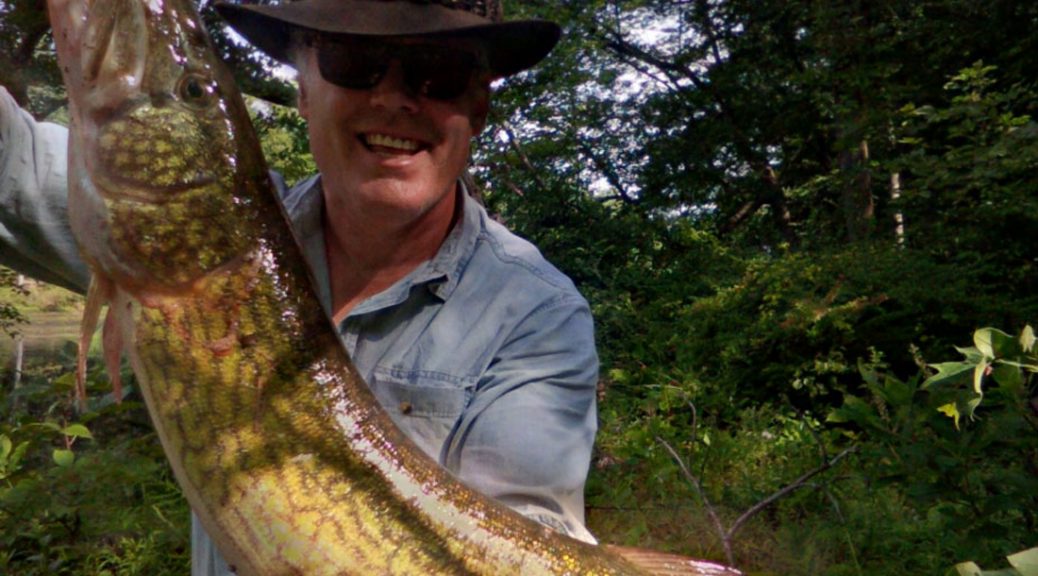 It`s been a little over a month since my heart attack and I`m really doing very well and feel really good. Though I am still a bit gun-shy about dragging out my `Yak, I figured that I`d have a go at some chain pickerel on foot this morning. As you all you sort of know by now, chasing Esox(pike, musky, pickerel family) is definitely something that I enjoy doing immensely.
As I walked outside, I noticed there was a slightly over-cast sky with a nice breeze in the morning air. A really nice morning to go after those toothy river wolves, I thought to myself as I loaded up my gear. By 7am I was on my way.
I decided to start the day off using a number four, gold Blue Fox spinner, as I have caught countless pike and pickerel over the years using this deadly color spinner. Heck, my pickerel chasin` days span way to back even when I was in the Air Force stationed in Louisiana. My room-mate Boyde and I would take his boat out and chase “Jackfish” as they are called in that part of the country, for hours. My esox chasing adventures years later, took me up into northern Ontario, with my step-Father Rich, where we went after northern pike for many years.
So I do know from experience, what color and size spinner works well for `ol Mr. Esox.
As I made my second cast of the morning, a rather violent strike came about as my rod dipped towards the murky water, bending it in half as I set the hook! Pickerel on! And a good one at that! Really felt like a good-size, heavy fish by the way my medium light action Ugly Stick rod was bending. As the pickerel ran, the drag screamed and line peeled off as the heavy fish dove down deep in the weeds. With twenty pound Power PRO braid, I was confident that I could horse the mighty fish from the weeds…….. and I did. As I reeled up some line, the river wolf dove again making the drag scream on my Shimano reel. Then all of the sudden, he ferociously ran upstream……..never showing himself.
And after a couple more gallant dives and twists……….. The line went slack……. he was off.
I quickly made my way upstream to have a go at another pool that was surrounded by a weed bed. After a few casts, a young jumped on my gold Blue Fox spinner. I was on the board with the first pickerel of the day. Took a couple pictures and quickly released this lively chainside back to where he came from. 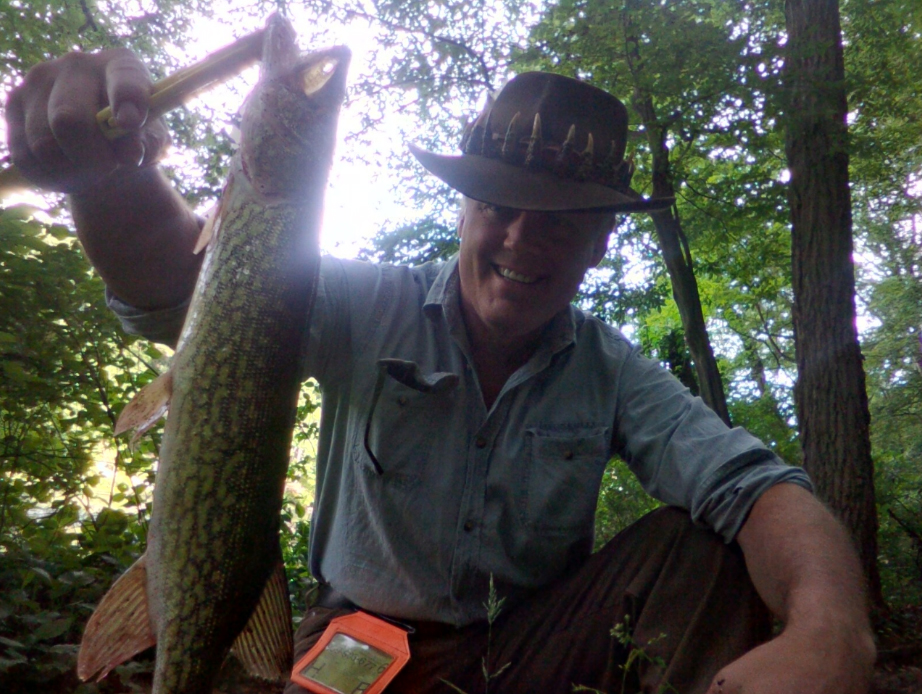 Now I only have a few hours to fish on Thursdays as I go into work late that day, so I had to get moving in order to cover some ground(water) quickly.
I also decided to mix it up and try something different lure-wise. Why not try bubblegum, I said to myself. No no….. not an actual piece of bubblegum, a Zoom Super Fluke Bubblegum lure. 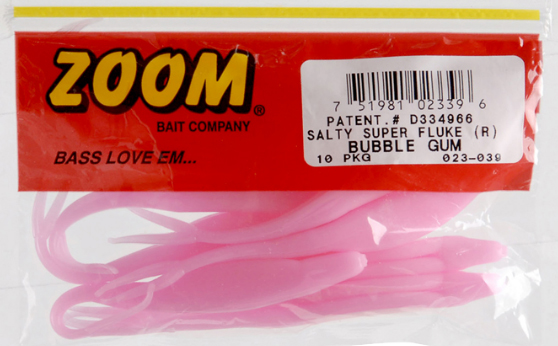 I have caught many different species of fish using Zoom Flukes……. it`s a very solid lure in my book.
I rigged up my line with the “Bubblegum” Zoom using a 4.0 hook without any weight. I like to feel the action of the Zoom Fluke without a weight as you can easily make it “dance” using various retrieves. I like to cast it, retrieve it shortly veryquick, then slowly reel it in, twitching it and the letting it drop. Many times I get off the chart strikes on the drop.
And that`s what exactly happened on the very first cast.
Right as the Zoom dropped, a very heavy fish struck violently! I immediately reeled back and set to hook hard! And the fight was on! What a fish!
Another very hard fighter that ran me out into the weeds. I played him out for about five minutes before I literally horsed him up in the air and over the bank. 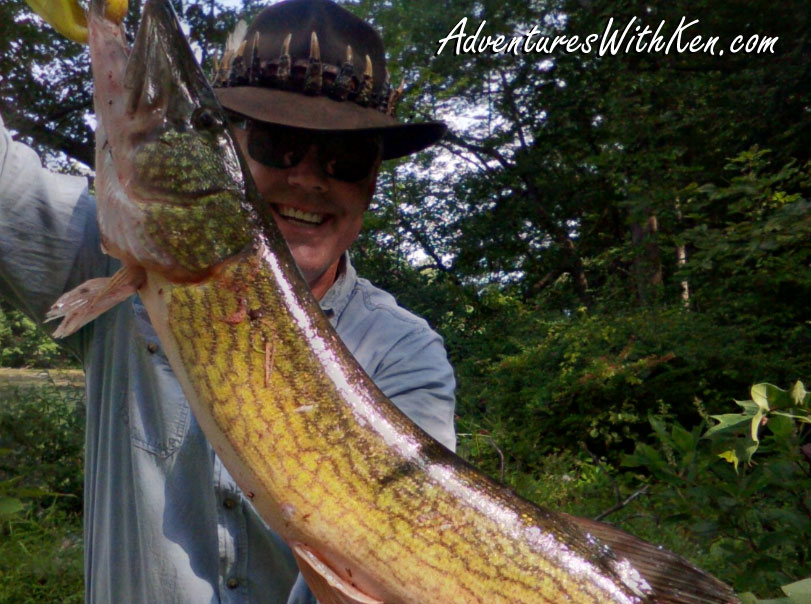 What a beauty! 25 inches! I don`t know what he weighed, but I`d had to guess four or five pounds as he was really a fat pickerel. 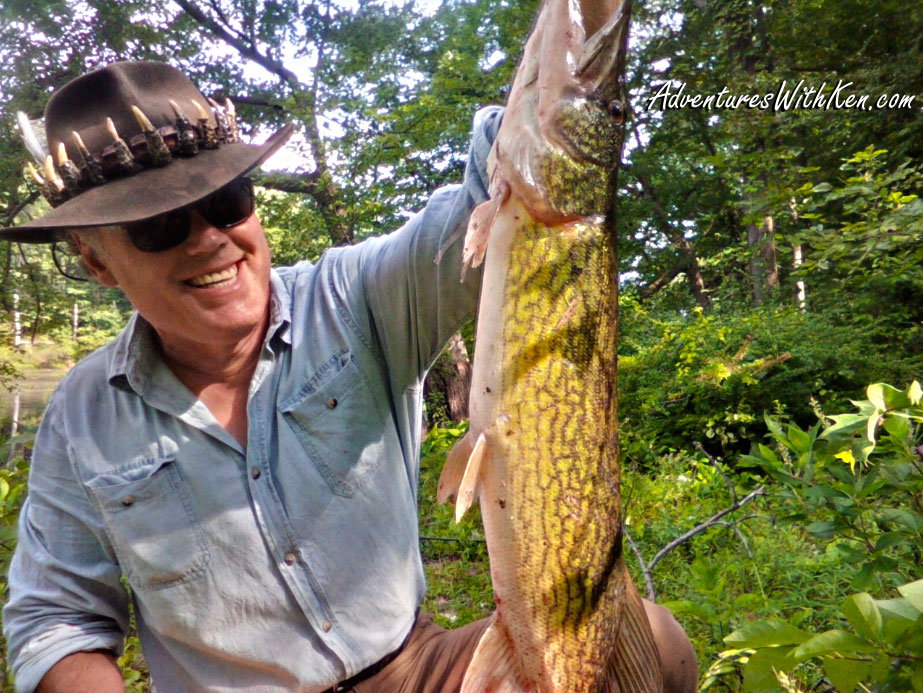 Quite the adventure for just a couple hours!
So yep……. I`m getting better and better and I`m regaining my confidence as I get out and about in the wilderness again. And….. I`m catchin` a few fish too while I`m at it.
Nothin` wrong with that!
Till next time…..