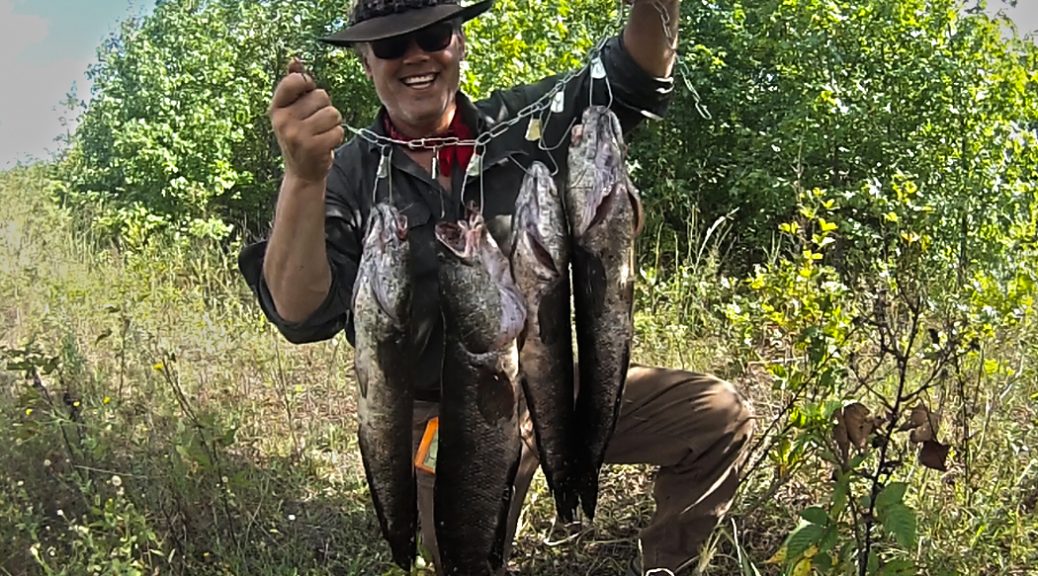 Snakehead wranglin` was most definitely on my agenda last week. I planned on going down into South Jersey at least once while on vacation despite having a very painfully infected leg. Apparently the week before I had been bitten by something underwater while fishing/wading knee-deep in a really swampy covered lake. Guessin` it was probably a snake as it bit me on the top of my foot……twice! And now my top of my ankle was pretty swollen and hurt like hell, just a few days later.
My girlfriend was a bit upset that I hadn`t gone to the doctor….yet.
But……. I had a date with some “Snakes” down in South Jersey first.
I was going after `em on foot as I wasn`t comfortable draggin` the `Yak all around by myself. Definitely not 100% confident about doing certain things since suffering a massive heart attack a month and a half ago.
But now I had a bad “foot” to complicate matters a bit.
I studied some maps of the Delaware River for a few days, looking at the various tributaries off the main river. This is where I was going to be targeting……… Accessible areas of the “tribs” by foot.
Got up the next morning, Sharon made me an awesome breakfast & packed me a nice lunch with plenty of drinks. It was definitely going to be a hot one as the weather forecast was calling for a high in the 90`s in the area I was heading too.
Then I saddled up and was on my way. My destination was approximately thirty-eight miles south of Gibbstown. At least that is what I wanted to scout out a bit, as the area looked ideal. Swampy and accessible.
After a two and a half hour ride, I arrived in the general area…… if it wasn`t the exact spot, it was close enough.
Eager to start throwing some top-water lures, I hiked about a mile into the abandoned swamp area of the tributary that was probably five to six hundred yards from the Delaware River. Good thing I had covered myself with Deep Woods OFF bug repellent before I left my truck, because hot, muggy and buggy best described where I was walking.
I was planning on throwing a KVD Top-Water Frog to start things off. Working my way into an opening, I began casting.
After about the sixth cast into the thick, green-pea muck, a magnificent swirl missed my frog as the thick green muck quickly calmed back down. I worked the area carefully, attempting to provoke a strike. Nothing.
Then next cast, just as the frog was literally six inches from shore, a violent eruption!!! Snakehead!!!
Fish on!…….. then just as quickly…….. fish off.
But as I was fighting that Snakehead briefly, I saw two others swimming in this pool of muck next to the one I I had on. I didn`t actually see the fish, just the swirls…….and there were at least two other demons lurking in the dark, thick green muck. 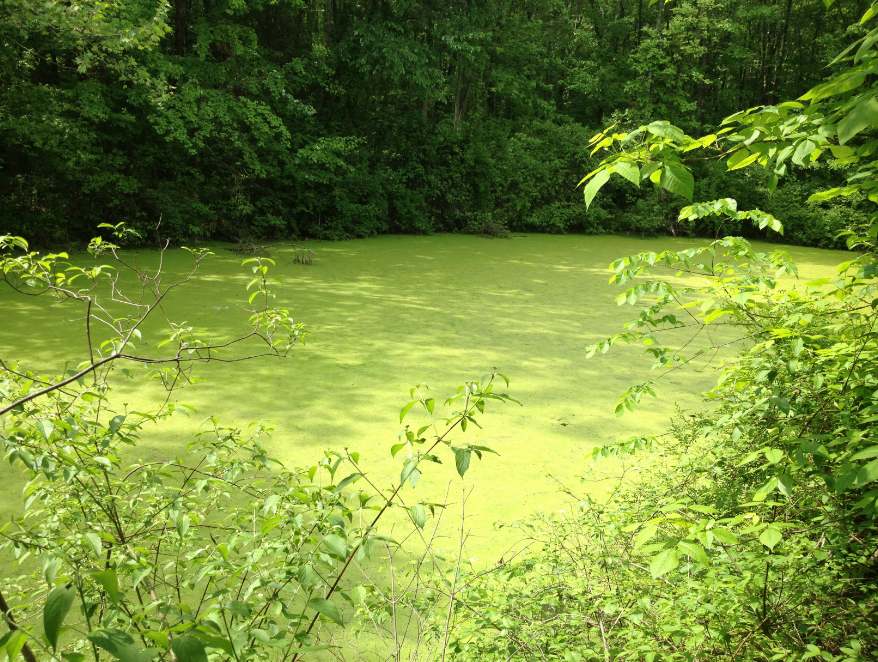 Four more casts……… all quiet. Then I decided to toss the frog in and just give a a few short twitches and not retrieve. It had to be out there floating in the muck at least five minutes………..then BAM! A violent explosion as the Snakehead smashed the frog I set the hook hard! Fish on! The snake gave quite the acrobatic show as it broke water and thrashed about! Then dove deeply into the thick green seaweed! This is where the 20lb. Power PRO Braid line would come in handy as I muscled the snake out of the water-grass and onto the bank. 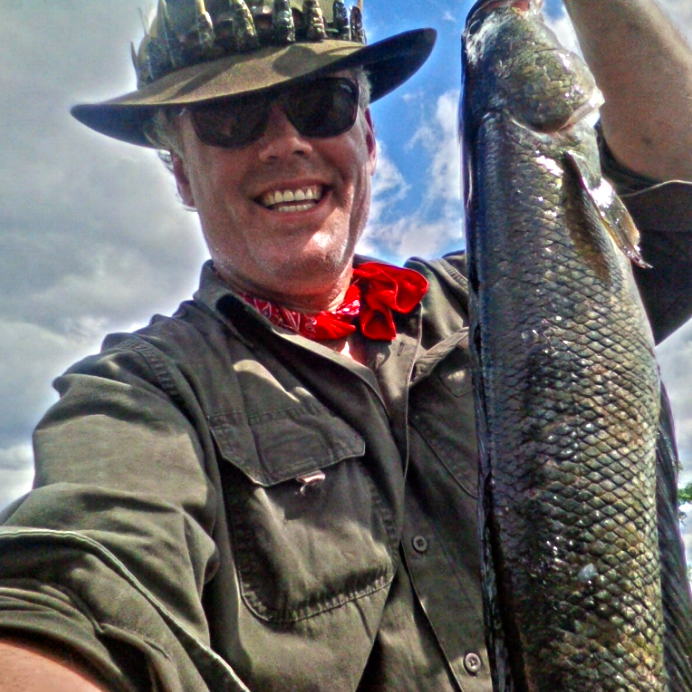 My first “Snake” of the day!
I quickly got the stringer out as this Snakehead`s next destiny was going to be with my knife, as snakeheads are an absolutely delicious delicacy!
Working my way through the bush, I came upon another likely looking spot and began working the frog. Casting under the very edge of an embankment that had bushes over hanging it a bit. “The perfect ambush area for a hungry snakehead”, I thought to myself.
I purposely tossed the frog in the bush, to make it drop in the swampy water below. No sooner had the frog hit the murky water below and BAM! Another snakehead was on!
Another nice one for the stringer!
The Snake Party was on!
Over the next few hours, I fished the area hard and managed to call it a day and headed home with four nice size snakeheads in the cooler. 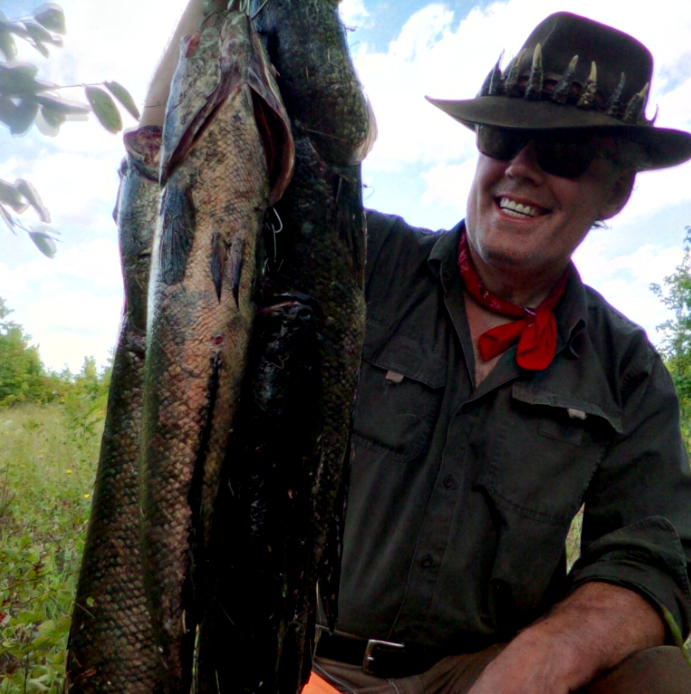 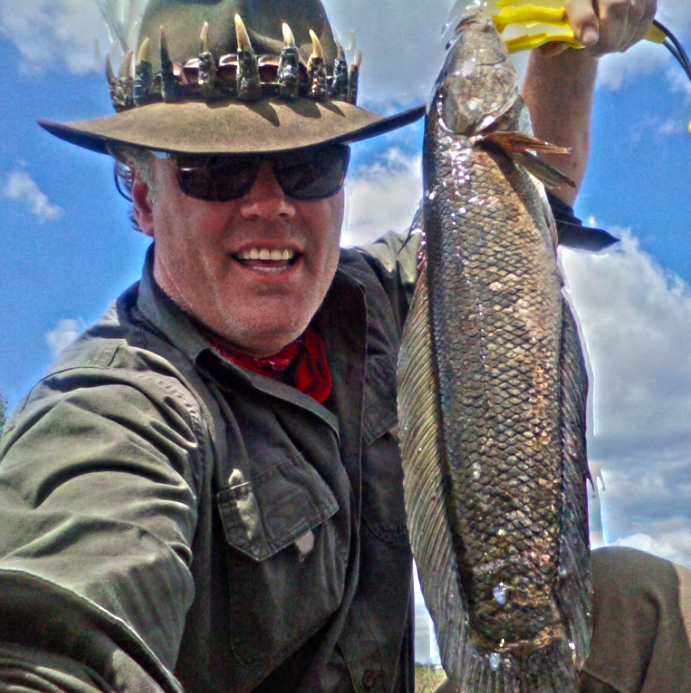 Got home around 7pm…….. had a bite to eat, then had some Snakeheads to fillet afterwords. 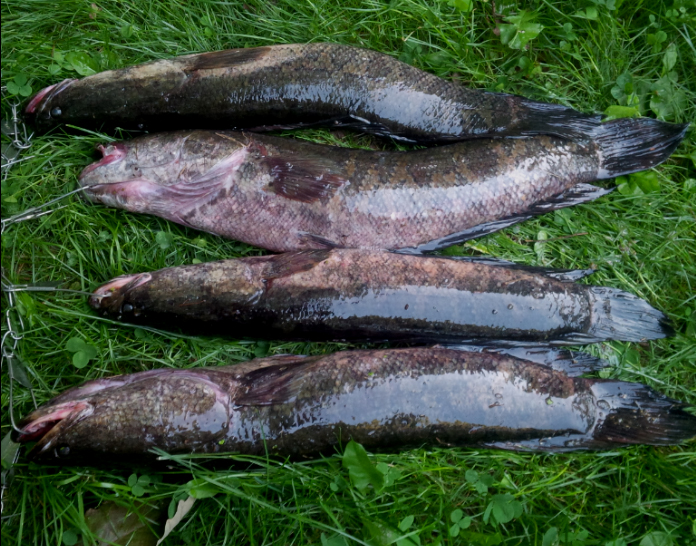 If ya like to fillet fish, like I do,…… you`d love runnin` your knife across the back of a snakehead. Beautiful fish to fillet. Very white and thick. Sort of reminds me of a walleye when you fillet it. 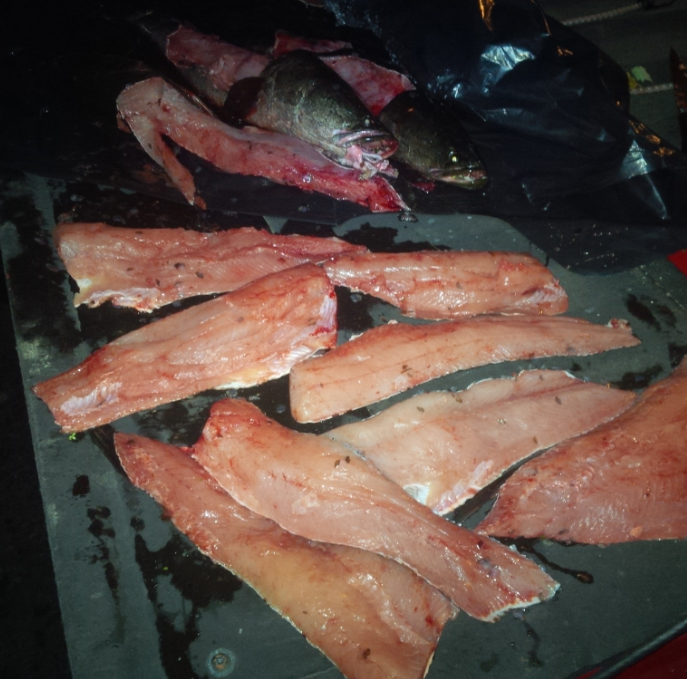 And if you like to eat fish, you`ll love grilled Snakehead! Out of this world. Awesome breaded and fried as well. Sharon used a Cajun Seasoning on the Snakes and I got to tell ya, it was like I was dinin` back on the Bayou in my Air Force days back down in Louisiana. Simply delicious.
Quite the Adventure indeed.
Tell next time…..
See all of my Adventures here.

4 thoughts on “Snakehead Wranglin` in the Swamps of South Jersey”