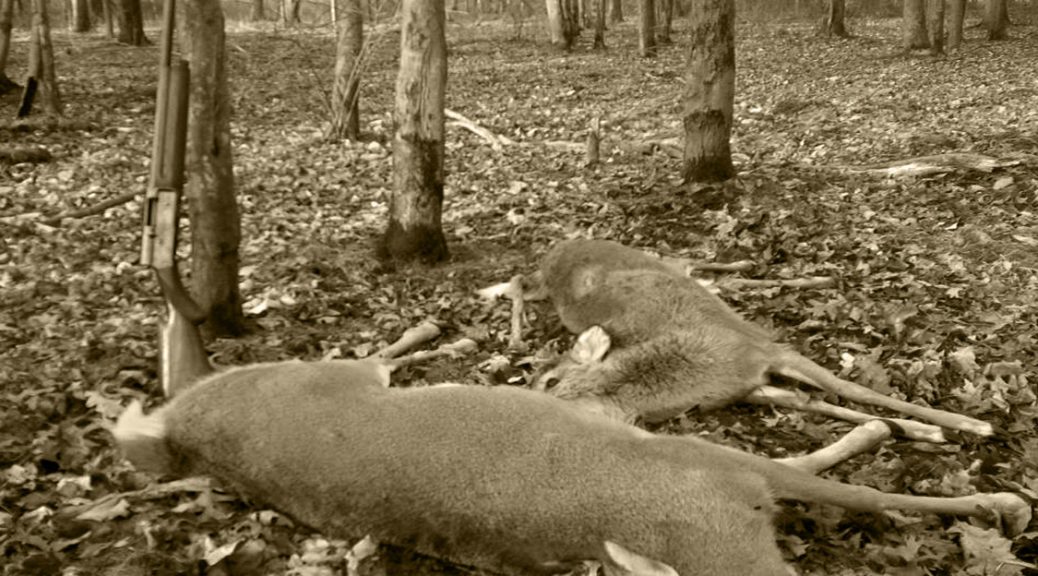 Here`s a quick clip I shot of that morning`s adventure;
Plenty of venison in my freezer thanks to Mark Wydner and Jacob Hoffman……real, genuine Califon boys indeed. I can`t thank both of them enough for helping me.
Till next time….
See all on my Adventures here.

Yep…. I`ll be dining on deer all year thanks to a couple of really good Friends! Nothing quite like dining on a venison burger on the grill in the Summertime or dining on a delicious, slow-cooked venison roast that has been simmering in a crock-pot for ten hours. And if it wasn`t for Mark and Jacob, my supply of venison would`ve ran out by this Spring. See since my heart attack, I have to be careful how much weight I lift or drag and I was very fortunate to have two good friends offer to help me get a deer out of the woods if I got one. So on February 9th I had a go at it, jumped up i Well ever since I posted a couple hunting videos, a few guys have been asking me what kind of gun do I hunt with. So I thought I`d tell you all a little Tale about my 1960 Browning “Light Twelve” Gauge Shotgun that I use for deer hunting in New Jersey and how it came about. My Dad always hunted with a Browning “Light Twelve” 12-Gauge….. when it was time for small game and deer hunting, that was the only gun he ever used. I remember very well what shells he used for deer hunting…..Winchester Mark V`s. When shot through his Browning, they were an absolutely amazing combo. It was always a big deal for me to be able to go with Dad hunting & as a youngster. That`s me proudly holding the skinned Rabbit & my brother Keith sayin`, “I want to keep him!”
I have been deer hunting since I was ten years old and while I did shoot quite a few does on “Doe-Day”, I missed my share of bucks. Dad used to say that I got “Buck Fever” when I would see a buck……. and miss! ha! ha! I could shoot does no problem, but when a deer came through with antlers, that old “Buck Fever” would kick in!
Well my Dad passed away in November of 1979, Al Nagie, who worked with my Dad at Power & Light took me deer hunting that December up on his farm. I shot my very first buck on that cold December day with my Dad`s Browning Shotgun. My first 8-Point Buck that I shot with my Dad`s Browning Shotgun in 1979.
I used those Mark V Buckshot Shells that year I shot my first buck, that my Father had from previous years.
Moving a few years forward, in 1988 I got it in my head to try to find Belgium Browning “Light Twelve”…… as I figured I`d just retire Dad`s & keep it in the gun cabinet.
Ended up tracking one down at Griffin & Howe, a high-end gun dealer in Bernardsville. I drove over to see it one rainy afternoon with my long-time childhood friend Mark Ader. We eventually found the Browning on the display rack and could not believe the condition….. it was simply gorgeous! I bought it for $350 dollars!……To me, it was like finding Gold. Now it was years later and those famous Winchester Mark V Buckshot Shells were no longer produced. Instead you could buy Copper-Plated Double O Buckshot, so I did. Low and behold, that old beautiful Browning didn`t throw this type of shot at all……. as I missed a huge Buck at a ridiculously close range!
I remember sitting there in my stand completely shocked at what had just happened as I watched the big buck gallop away. So after that I only took the Browning out Pheasant Hunting and gave up on using it for deer. Now no no…… I didn`t stop deer hunting, I just used my Step-Father`s old JC Higgins 12-Gauge Pump for the next few years.
That is until I went back to Bernardsville and started working at Bernardsville Volkswagen in 1996. See across the street from the dealership was Clark`s Hardware Store and I ended up selling Jim Clark and his family three VWs.
Now this hardware store was the coolest one ever to me because Jim also had a gun dealer`s license and had a few guns for sale from time to time.
Well one Saturday morning I walked over to get something and saw this old Browning up on the shelf for sale. I asked if Jim was around and they called upstairs and down he came. Jim and I always had nice conversations,…. heck anything from Volkswagens to guns!
I asked him about this old Browning and he took it down. He told me it was probably from the late 40`s to early 50`s. I noticed this peculiar safety mechanism on the gun, unlike anything I had ever seen. As a matter of fact, to be perfectly honest, I thought it was pretty darn awkward.
*Watch this quick Video as I explain how it works;
I remember scratching my head thinking, “There is no way in hell I`d hunt with a gun with this type of safety” – Then Jim said that he believed it was a full-choke barrel. I said, “Well how can you tell?”…..He took a dime out of his pocket and said, “If a dime fits in the barrel sideways, it`s a modified choke and if it can`t go in the barrel, it`s a full-choke” – “Doesn`t go in the barrel Ken, it`s a full-choke” –
Now I was a little more interested as I never had a Browning with a full-choke barrel. I was thinking that I would just swap barrels with my 1960 Browning. So I asked Jim what he was asking for it and he said $350 but “If you really want it, you can have it for $200 because we`ve bought so many cars from you and are going to need another pretty soon!” – With that, I marched across the street with that old Browning Shotgun.
A couple months later I was planning to pattern that gun with the full-choke barrel. I went in a sporting good store(which is no longer there), down by Muller Toyota on Rte. 31. I went in and asked to buy a couple boxes of Double O Buckshot and the old man out the counter asked me what kind of gun was I shooting? I told him and he looked at me and smiled, then took the boxes of Double O`s off of the counter and put two boxes of Triple O`s in their place. He said, “You run these Triple O`s through your old Browning…..and you`ll be thankin` me”
I drove over to Spruce Run to try them our that afternoon. After I shot the first round I was shocked! At 40 yards all eight pellets were tighter than any shot I had ever seen! I loaded up another target and shot again at 50 yards……… I was shocked! Same tight grouping! Never ever though of using Triple O Buckshot.
I was off the entire week of Buck week that year and what a week it was! I ended shooting four bucks and two does that week with that Browning “Light Twelve” Gauge Shotgun using Triple O buckshot.
The furthest I have shot and killed a buck is at 93 yards on a drive using Triple O Buckshot. I had three “drivers” that day walk off the distance…..and all three were shocked.
To this day, Triple O Buck with my ol` Browning, is the only thing I use for deer hunting in New Jersey.
Ken-