Started out the New Year with my Brother and a couple of long-time Friends from Califon, doing something that I had not done since 1991…..Rabbit Hunting! Geez come to think of it, I had not hunted with these guys easily in twenty five years or more.
So when I was leaving Mom`s on Christmas eve, saying good-bye and all, I shook my Brother`s hand and he asked, “Hey bud, if you don`t have any plans on New Year`s Day, Hanky, Pete and me are going rabbit hunting and we wanted to know if you wanted to come along?”
“Well hell, I have plans now! Sure I would love too” I replied, “Just text me what time we`re meeting”
Let me enlighten you a bit, as to whom these fellas are and why they`re special to me. First off, there aren`t very many folks around these parts anymore, that are actually from Califon.  But the four of us, Pete Samski, Hank Stillwell, Keith Beam and of course, myself, are true Califon Natives as we all grew up here. As a matter of fact, both Hanky and Pete, being a little older than me and my Brother, played softball and also were members of the Califon Fire company  and hunted with our Dad. So that`s why this rabbit hunt was special for me anyways……..to be able to hunt once again, with these gentlemen that also hunted with our Dad. Both of them know what it was like in Califon, in days gone by……a time when hunting was more of a  mainstream activity in town.
So we met up at 9am and finally got to the spot around 9:30….when we got there Keith asked, “Well what are the teams?” Pete said, “Ahhhhh I guess I`ll take Kenny….. can you shoot? he asked busting my chops!
I replied laughing, “Hell yea Pete….. I got three shells in the gun!” and Hanky said, “Hey that might get expensive if you miss a lot!” and we all laughed as we trekked down the dirt lane to begin our hunt.
We took turns driving different patches for each other, in other words, Pete and me drove a patch for Keith and Hanky then vice-versa. The first patch I heard Hanky say “Ohhh…there goes one!” then shortly after that I saw Keith put his gun up……. but never shot. When we got to the end of the brush patch they both said they had seen a few rabbits……. but neither shot! I chimed up and said, “Did you guys come here to hunt or what? Keith give me your gun”…… as I pulled my phone out of my pocket I said, “Here shoot some pictures with this, since you don`t want to shoot your gun!” haha! And we all laughed like hell.
They drove the next brush patch for us……. nothing. No bunnies. So we were up again to drive. As I kicked around in a patch of rhododendrons a rabbit tore from the cover as I quickly fired off two shots……missed. Moments later, Pete fired off a round…..missed. Then in less than a minute, he kicked up another one…..and missed. Keith and Hanky were laughing like hell, “Now that shooting is going to cost you boys some money!”
I said, “Damn….. I swore I rolled that rabbit!”…..”I just need to settle down a bit” as we all laughed.
Over the next few hours, we laughed and joked and just had a really great time……..
To be able to hunt with the three of these guys again was a true Califon camaraderie indeed.
And I did settle down, as you can see…. 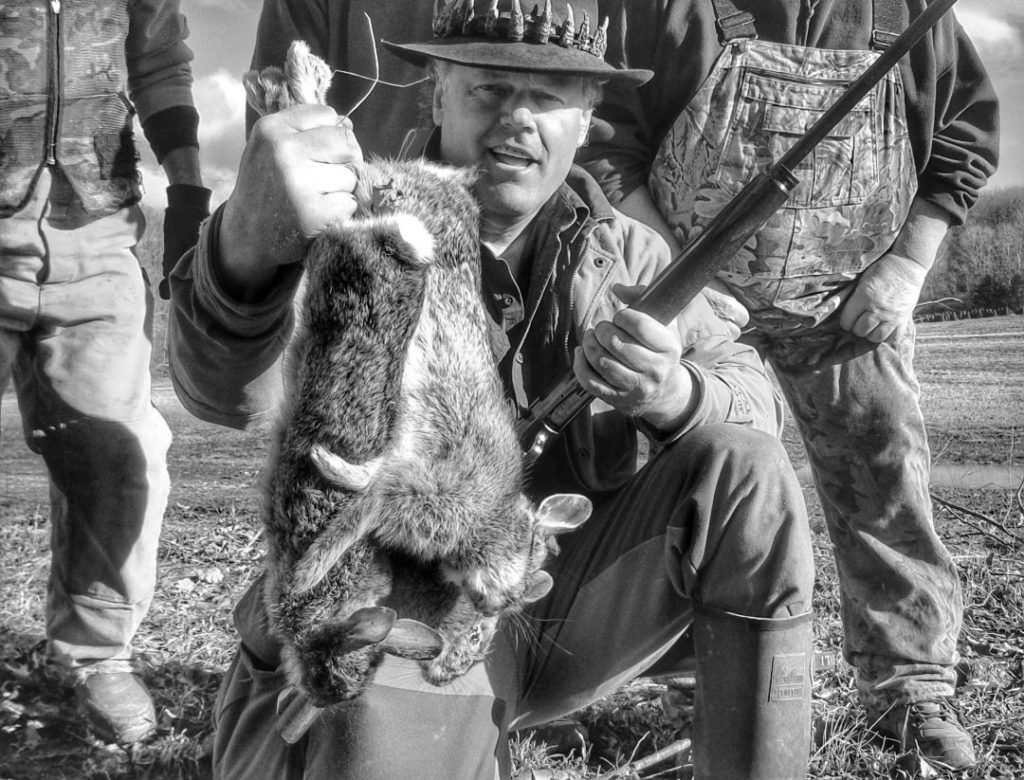 Someone once said, “It`s more fun to think of the future than dwell on the past”……
Ya know what I think?
I don`t believe that person grew up in a town as magical as Califon with these kinds of Friends way back when. As for this politically correct world that we live in nowadays,…….well…….
“Do forgive my evil ways……
Sometimes I have a real hankerin` for the past with true old Friends and some fine rabbit stew”
G`nite~
Ken-
Happy New Year everyone.

6 thoughts on “The Bunny Tale! a Rabbit Hunting Adventure!”