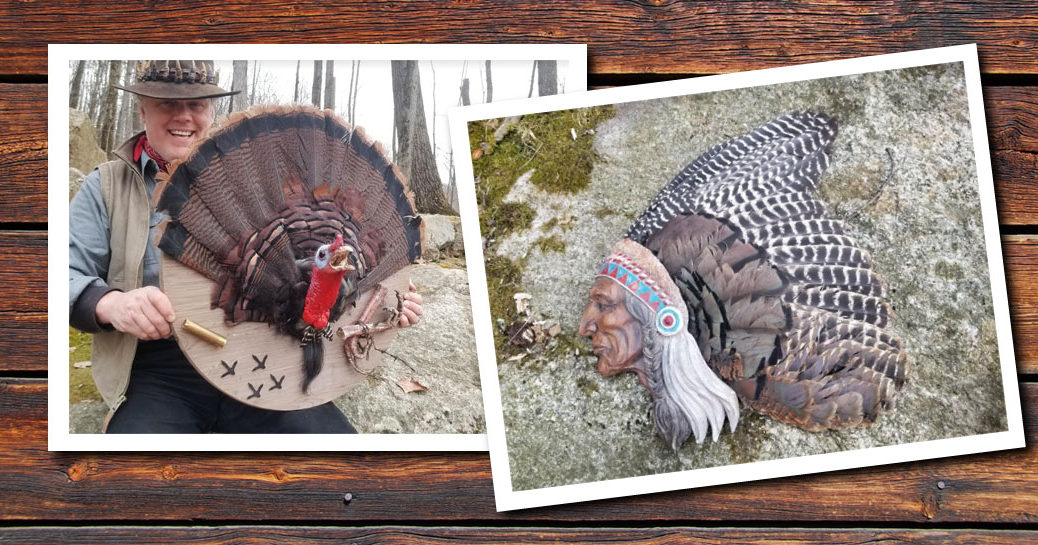 Thought you all might enjoy seeing my latest creations that I finished up this past week. That turkey that I got with my good friend Nick Dalasio and his amazing turkey dog Maizy last Fall, turned into several fun little Winter Projects. Just to refresh you a bit, this was how my idea started back in November.
So after drying out the tail and legs for a few months, I began my plan to mount the tail. I went to Home Depot to look at some wood to get some ideas to make a backboard with. Found some awesome relic-looking wood and was right on the verge of getting it until I happened to come upon this nice looking, roundish, little table-top sort of, pine piece. And it was only $9.95…… “What the heck” I thought, “can`t go wrong for 10 bucks” so I grabbed it. It was just a simple, round piece of pine. 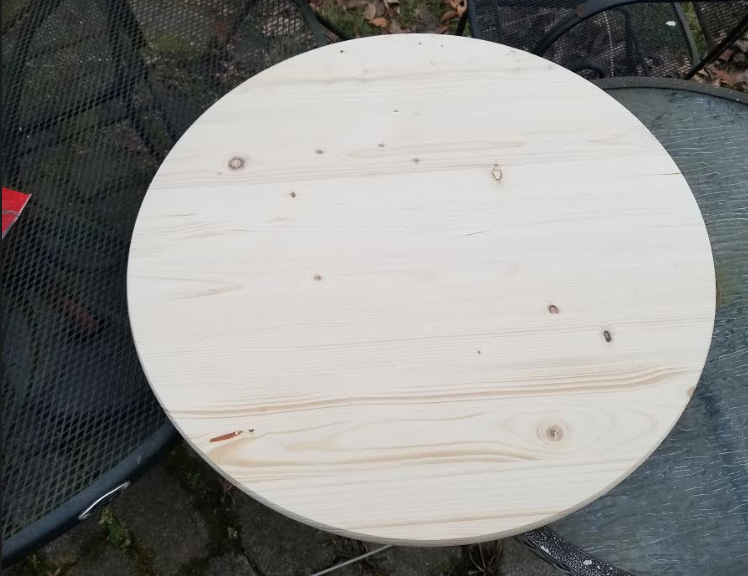 But I had some ideas……
I was going to modify it a bit in order to add a “Barn wood” effect to it. So I began the process by scarring the pine with a heavy wire brush and several little files. Adding gouges and scrapes throughout the pine. 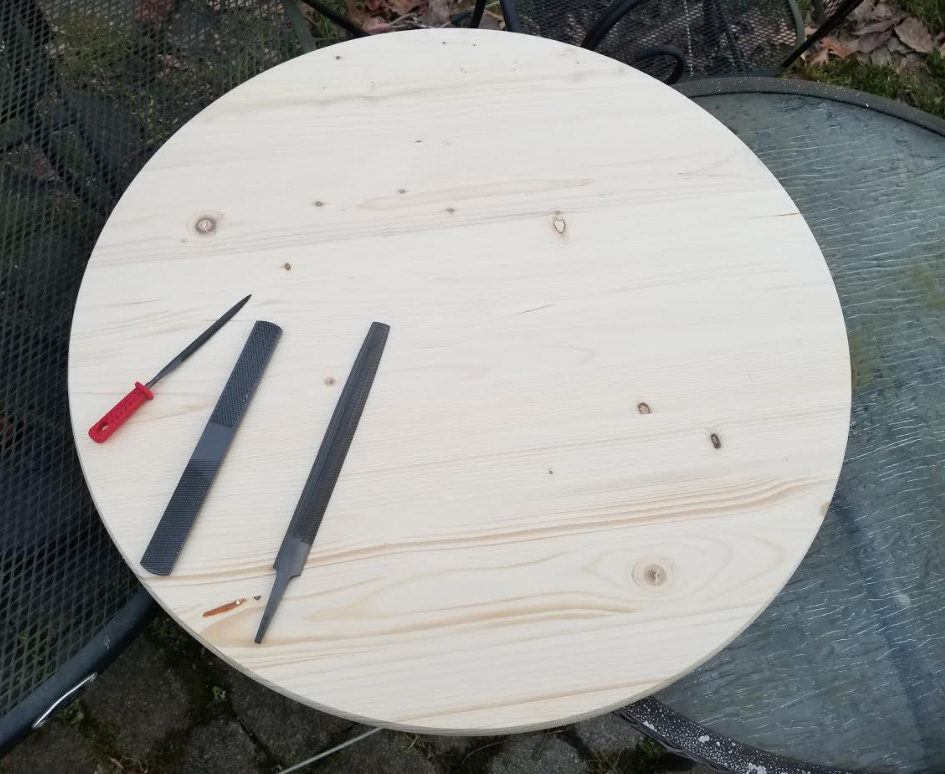 Next I made up my “Barn Wood” stain. A concoction of steel wool and white vinegar sitting in a can for two weeks. It`s the coolest mixture to because when you apply it, nothing happens……then in about fifteen minutes, the tone and color of the wood start changing right in front of your eyes. Note: The longer that you leave the stain concoction in the can, the stronger and more effective the stain becomes. Once the stain saturates the wood, the scarring becomes very prominent, giving it a very nice rustic look. 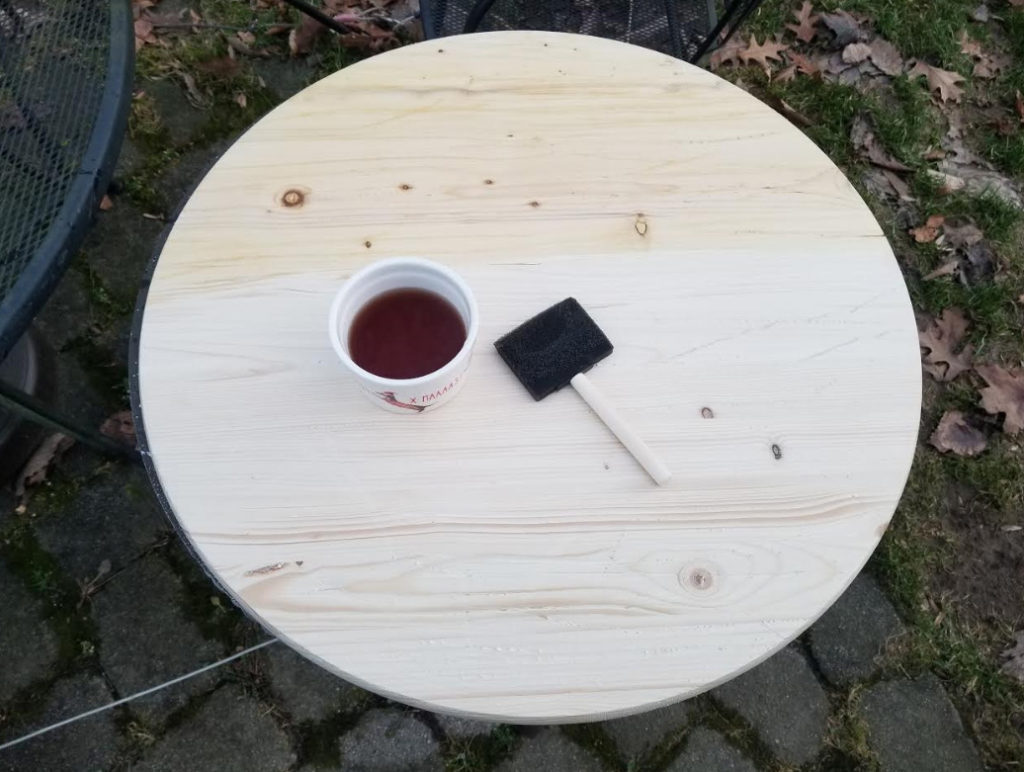 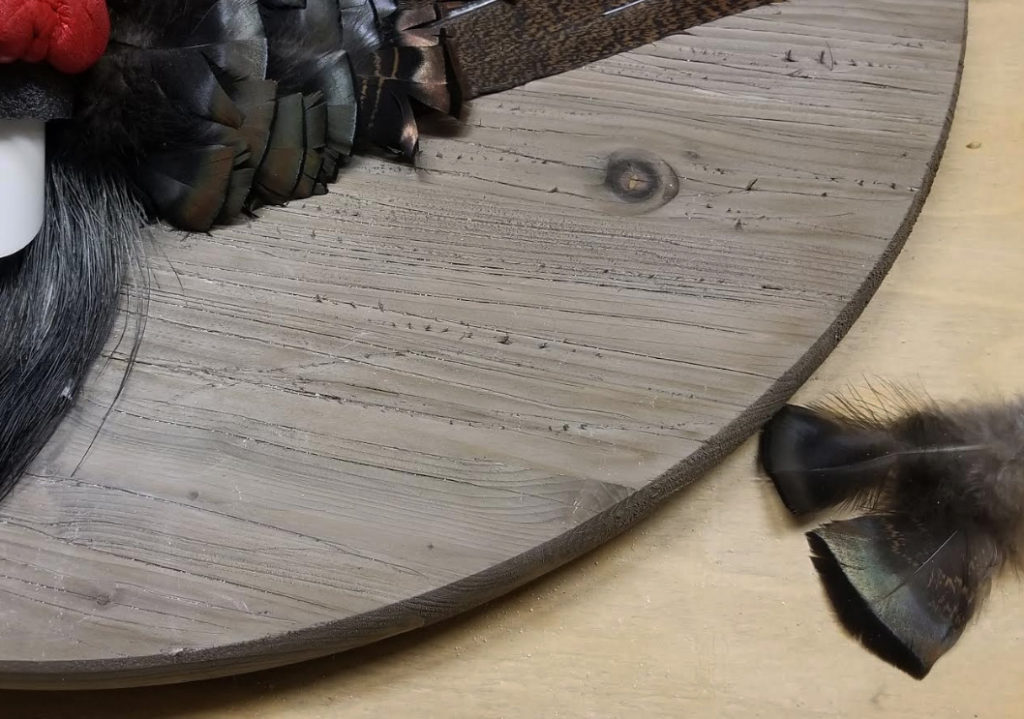 After a good bit of shopping around on-line, I eventually bought a painted, freeze-dried turkey head from a guy in Idaho. Told him I was looking for something a little wild looking, almost like the turkey was yelling. He said “I happen to have one right now” and then gave me a deal that I couldn`t refuse!
I mounted the neck and head through a small piece of PVC and this became my main anchor for the entire mount. 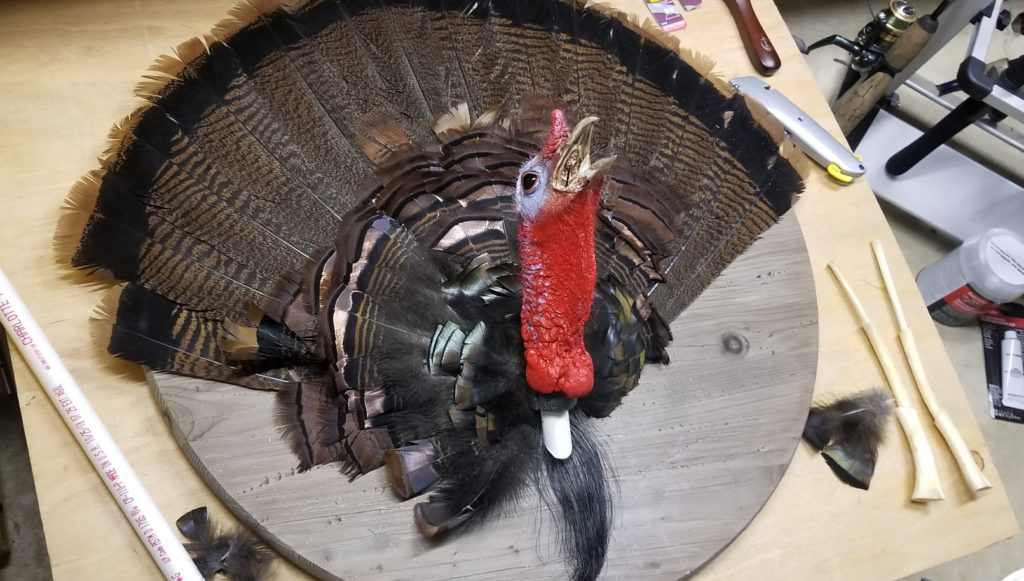 Using a small, rusty piece of barbed-wire, I tied the legs up and mounted them along with the actually empty shell casing that I shot the turkey with. I then added the four little wooden turkey feet prints. Ohhhhhh I ought to explain the meaning of “A Jersey Bird” – Well…… I did shoot the turkey in New Jersey…….. but there is one other subtle reason for this name…….
Notice how I mounted the feet……. hence “a Jersey Bird!” 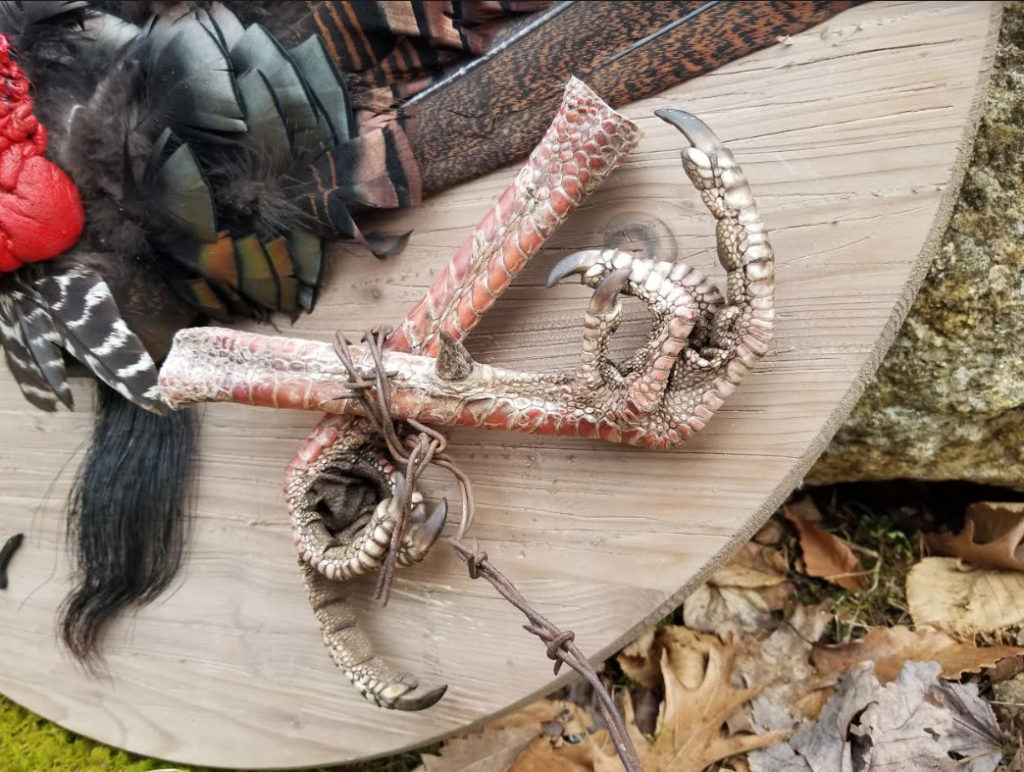 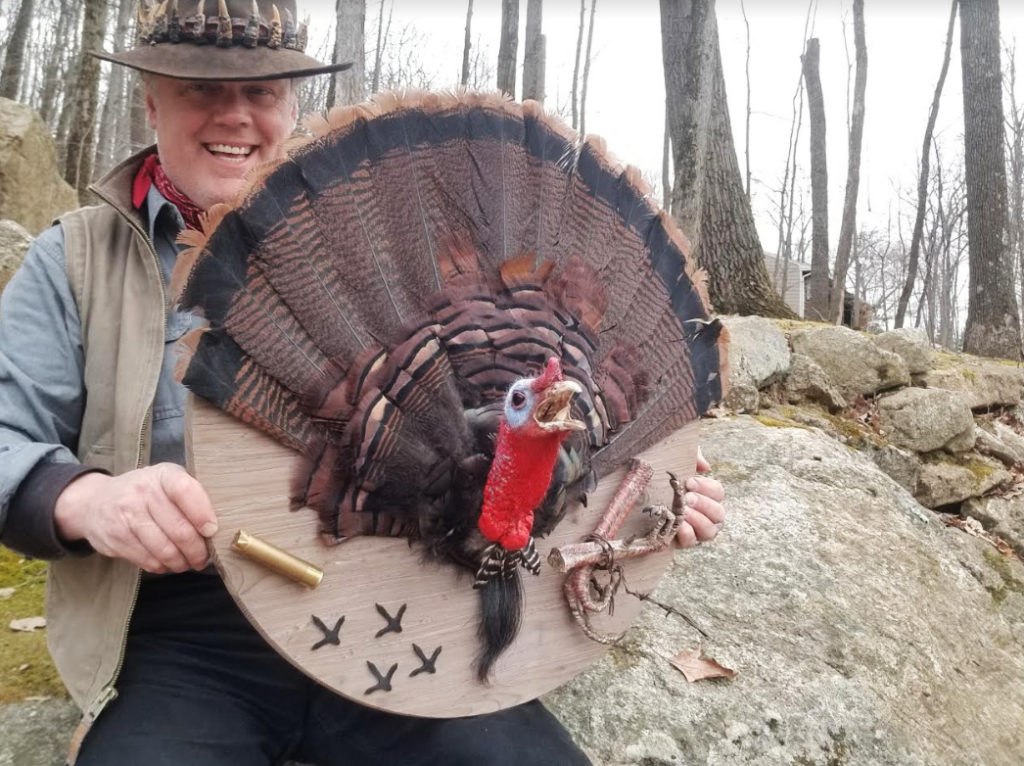 My next project was Chief Turkey Wing. Yep, you guessed it…… that is one of the wings from that same turkey. I actually found a taxidermy kit on-line one night and thought, “Wow, that looks really cool” but it was kind of expensive. So I had an idea…….
I sort of made my own “kit” – I bought a similar head on-line, then carefully used a Dremel Tool to cut the synthetic compound out perfectly. Once I had it shaped the way I wanted it, I slid the wing inside and simply wedged a half-inch thick, six-by-six inch piece of pine, against the wing and screwed it into the backing. Turned out awesome! 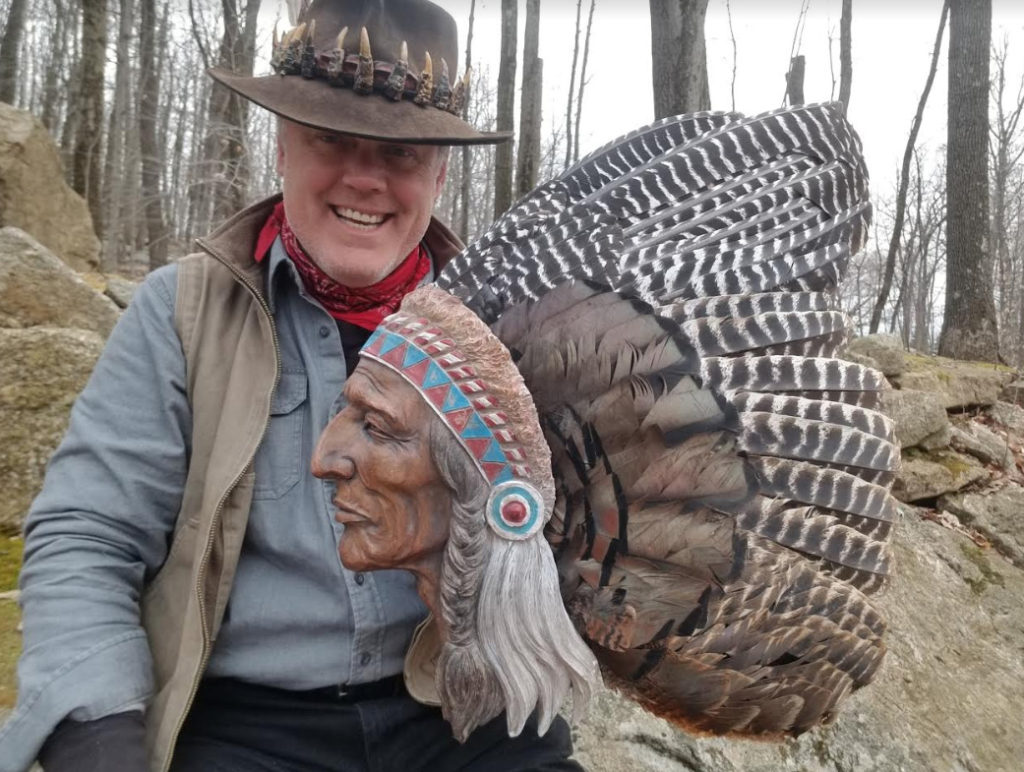 So there ya go!~ Thanks for reading about my Winter Projects, hope you enjoyed it.
Till next time…..
See all of my Adventures here