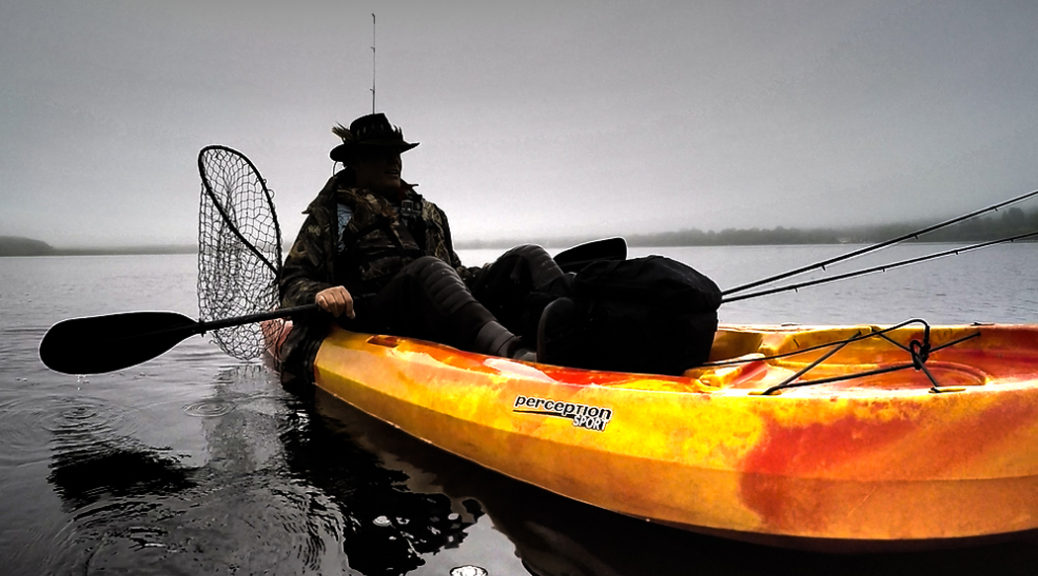 If there`s one sure-bet as to where you can find me on a rainy, drizzly day, bet the ranch you`ll either find me hunting or on the water somewhere in Jersey. And that`s exactly where I ended up the last two rainy Saturdays for a few hours. Chasin` `ol Esox in my `Yak up on Budd Lake.
Now I have to be honest, it was a torrential downpour when I pulled into the lot. I mean it was raining so hard that I actually sat in the truck contemplating going back home. But after waiting almost an hour, it had let up enough that I decided to have a go at it and dragged my `Yak out.
One of the reasons I enjoy fishing in the rain is simply because of lake traffic. There isn`t any! HaHa! I usually have the entire lake to myself, especially the harder it comes down.
Even brought the `ol Go PRO to try my hand at shooting a little video of the day`s adventure. But I`ll tell you, sometimes I prefer to leave the camera home though, as I have lost countless nice fish fumbling with it. I assure you that on more than one occasion, I have cuss n` swore while attempting to turn the camera on, and keep the fish on my line as well. Nice when it comes together, but doesn`t always work out the way you planned.
So getting back to the story….
I loaded up my gear, rods and reels and quickly paddled out into the “pond” – Ahhhhhhh and the wind was blowing out of the East. Reminded me of an old fisherman`s saying my friend Dave “Gonzo” Dembitsky told me; “Wind from the east, fish bite the least. Wind from the north, don`t go forth. Wind from the west, fishing is the best. Wind from the south, blows the bait in the fishes mouth”

Definitely had a strong, gusty breeze blowing that rainy afternoon. But it would make for decent drift, as I ran parallel to the shore-line. Just had to find a few hungry “fishys” that`s all.
I started throwing a Chartreuse Chatterbait with a white Keitech three inch swimbait for a trailer. I paddled my way into an upcoming patch of lily pads and started working the area. On the fourth cast I had a strike, only to reel up my half-bitten off Keitech. I just smiled as I knew `ol Esox was nearby.
I should also mention my set-up a bit. Everyone has their preference/style and this is mine whenever I`m fishing Toothy Critter Waters. I use a Extra-Fast-Action seven foot rod, paired with a Shimano spinning reel. Nothing fancy(as I tend to be a little “rough” with my equipment and break alot!) spooled with 30lb Power PRO Braid. Now I have used straight 30lb Braid and have also had Northern Pike bite through it like butter. So that being said, I always use a six or nine inch 30lb steel leader…..always. Also the leader gives just the right amount of weight I when I`m throwing a Zoom Fluke.
As I maneuvered about the submerged young lily pads, there was an abrupt, huge splash literally three or four feet in front of the `Yak. Apparently I was invading the resident Beaver`s territory, as this was his way of warning his friends of my presence. And when they smash their tail on the water that unexpectedly close, you`ll jump a bit!
Working the Chatterbait around the pads,….. suddenly a good strike……. Fish on! As the Bucket-Mouth acrobatically took to the air and eventually met my net. 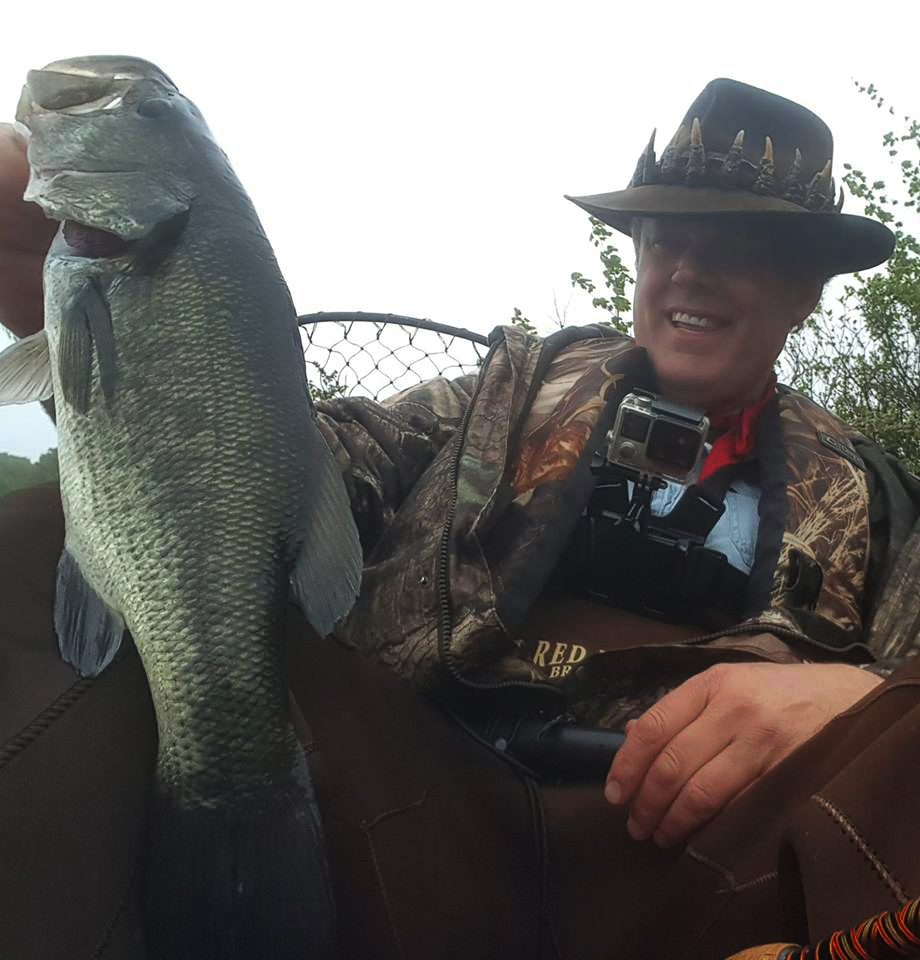 Snapped a few pics and quickly released the Greenback back in the “pond” – Paddled further down along the tree-line and decided to switch to my other rod and throw another one of my “go-to” lures, a White Zoom Fluke. 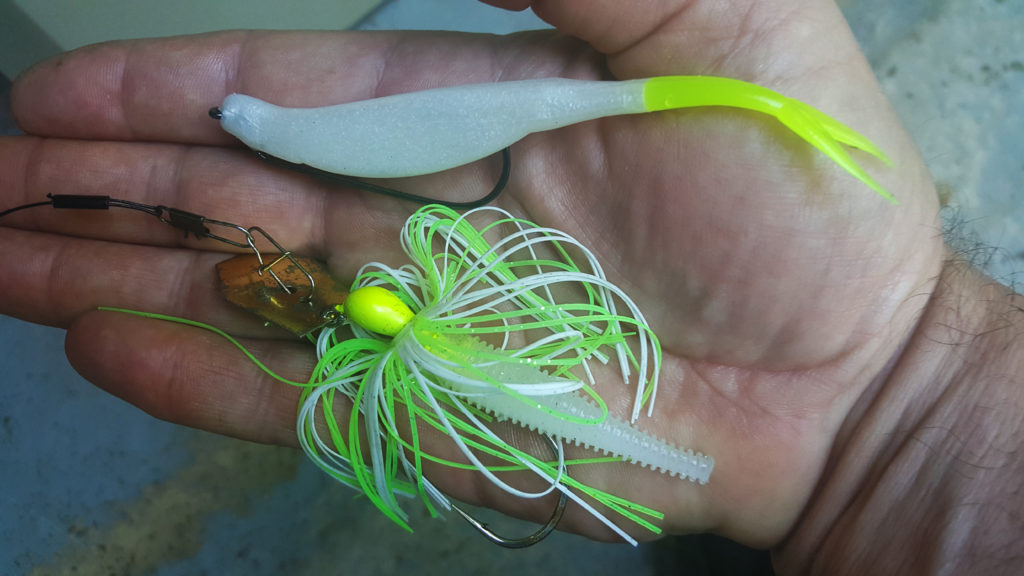 My very basic “arsenal” of lures usually consists mainly of these two lures. The top is the Zoom Fluke which I use from everything from Bass, Northern Pike, Snakeheads, Bowfins and even Muskies.
The Chatterbait (with the bitten off Keitech swimbait!) usually always gets me plenty of action wherever I`m fishing as well.
The very first cast I made with the Zoom Fluke, was right into the edge of this submergered brush………BAM!!! WOW! It was like a freight train smashed the Zoom when the mighty Northern struck! As I reeled back to set the hook, the heavy Esox dove down deep and the drag began to peel off line! After battling the Toothy Critter for several minutes, I went for the net and scooped up the fat Pike. A very good fish indeed!
Without further ado, here`s the little clip I shot of the day`s adventure up on Budd Lake; 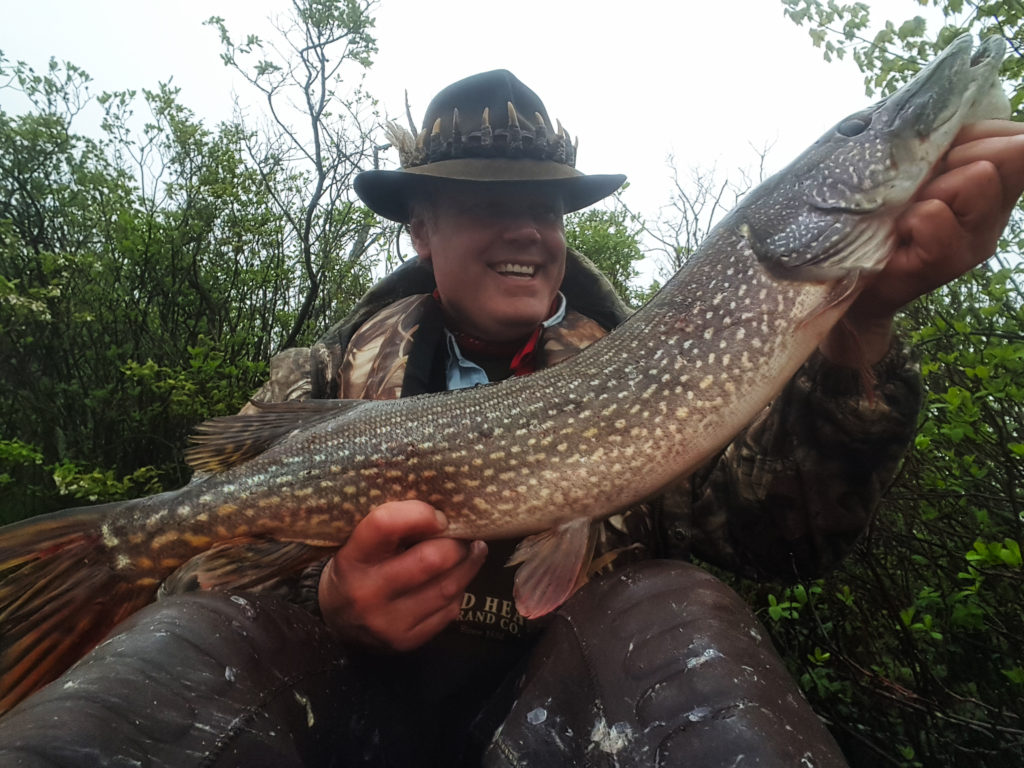 Hope you enjoyed my adventure up on Budd Lake. Get out there and catch `em up Gang!
`Till next time…..
See all of my Adventures
Here
***WARNING! I do swear a bit in the video below. Use your discretion if you want your kids to watch this one. Thanks! K-

One thought on “Wranglin` in the Rain up on Budd Lake”