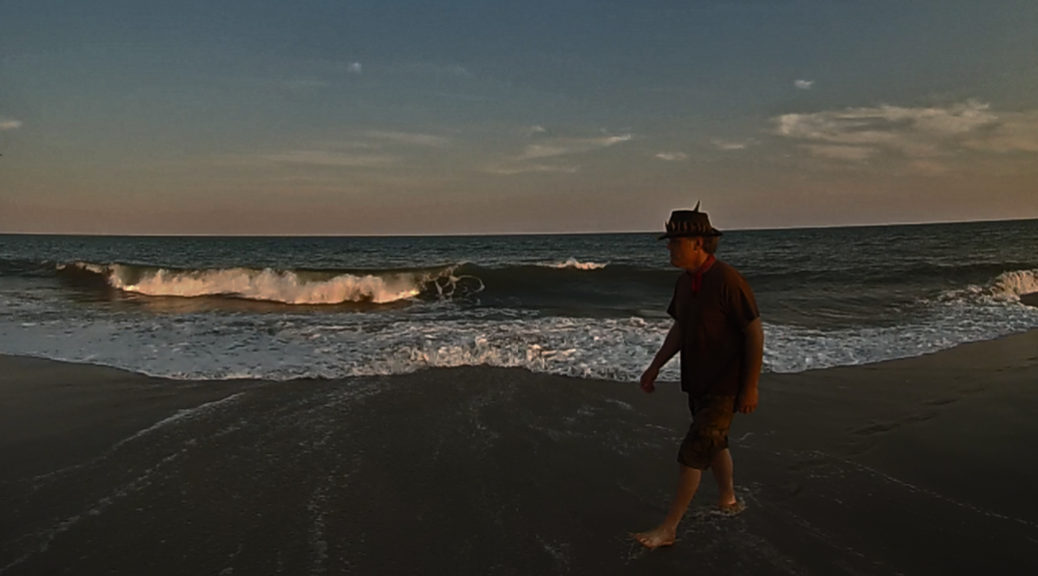 Whenever anyone asks me “Hey Ken do you Saltwater fish?” my usual answer is this, “Not really, but when I do, most party boats usually let me go for free. Why would they do that you ask? Well….. when they see me coming they`re like “Hey here comes the Chum King! Just stuff `em full of donuts boys and we`ll have all the chum we`ll need!” – Yep……. I get really seasick in the Saltwater. Hell I can still hear my Dad yellin` at me when I was 13 out in Sandy Hook, “Jesus christ Kenny! We`re in the damn bay!” –HaHaHa! So when it comes to boats and saltwater, well let`s just say I ain`t too crazy about it.
But there`s always the Surf which is something I`ve never really indulged in very much having only tried it twice in my life. However, when my buddy Mark Jones invited me to have a go at some toothy critters in the Salt, how could I say no? I couldn`t! So we made plans to head down to Cape May to go after some sharks on the beach. Sounds exciting doesn`t it? Sure did to me! Chasin` toothy critters in the dark!
For me this would be the furthest south in Jersey(couldn`t get much further!) that I had ever been and the possibility  to catch a `Ray or Shark was also a first. Heck for that matter, catching anything in the surf would be a first.
Upon arriving at their home, Mark came out and as we greeted each other with a handshake, he introduced me to his Wife Shelly who would also be joining us on our night time adventure. Such a pleasant Lady…. one of the first things she said was, “Where`s your Hat?” —HaHa!
We got to Cape May around 5pm and made our way out on the beach to begin our night. What a beautiful beach! There was a nice, light breeze coming off the ocean. Quickly Mark put the sand spikes in for the poles and cut up some bunker for bait and before you knew it, we were fishing. Shelly got all set up as she was going to be our “Photographer” for the night and a great one at that.
Several of Mark`s buddies also joined us in the evening surf. Real nice fellas. Heck I didn`t even realize that one of them was already friends with me on Facebook until I got home the next day!

Always amazes me how many nice people I meet because of fishing!
After fishing maybe an hour or so, Mark had a bite. As the fish ran the line he reeled back setting the hook!
Fish on! I couldn`t believe the bend in that twelve foot pole! He immediately called out saying, “Feels like a Ray” – And after about a twenty minute fight, the massive Ray was on the beach! 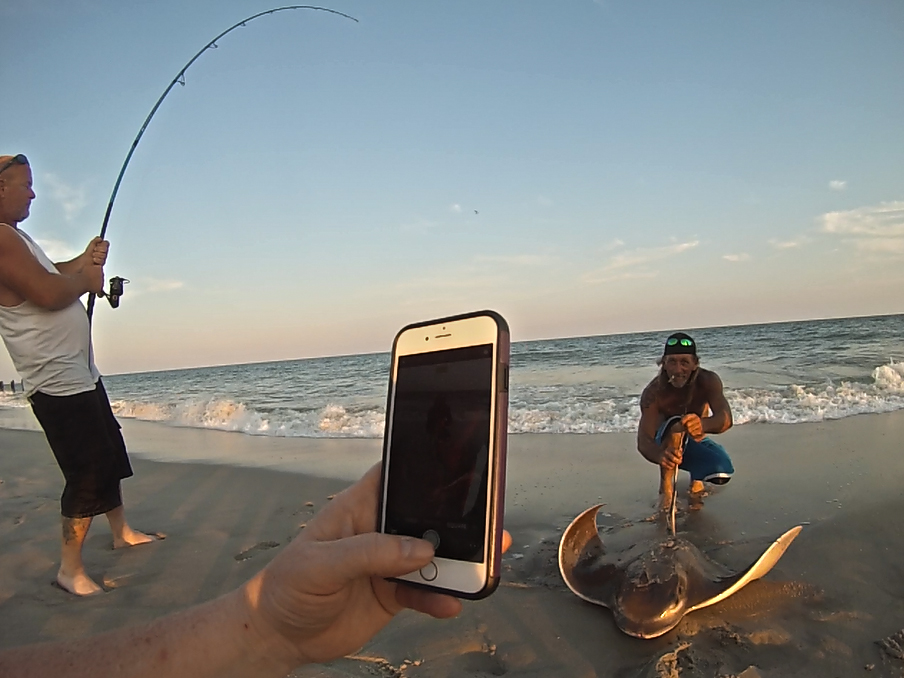 I couldn`t believe how these big fish fought! Then it was my turn…… 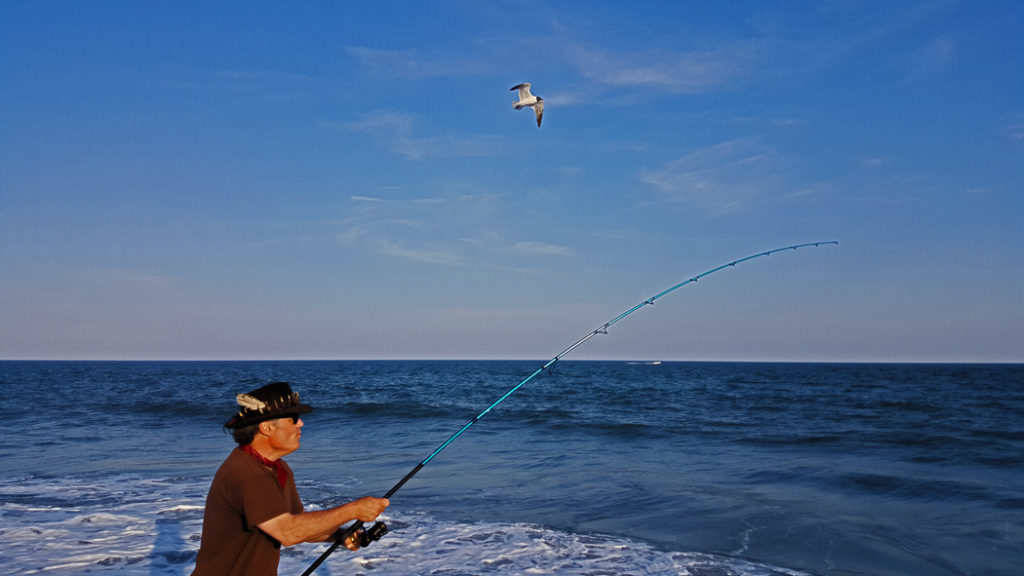 Whatever I had felt great to me! What a fight! 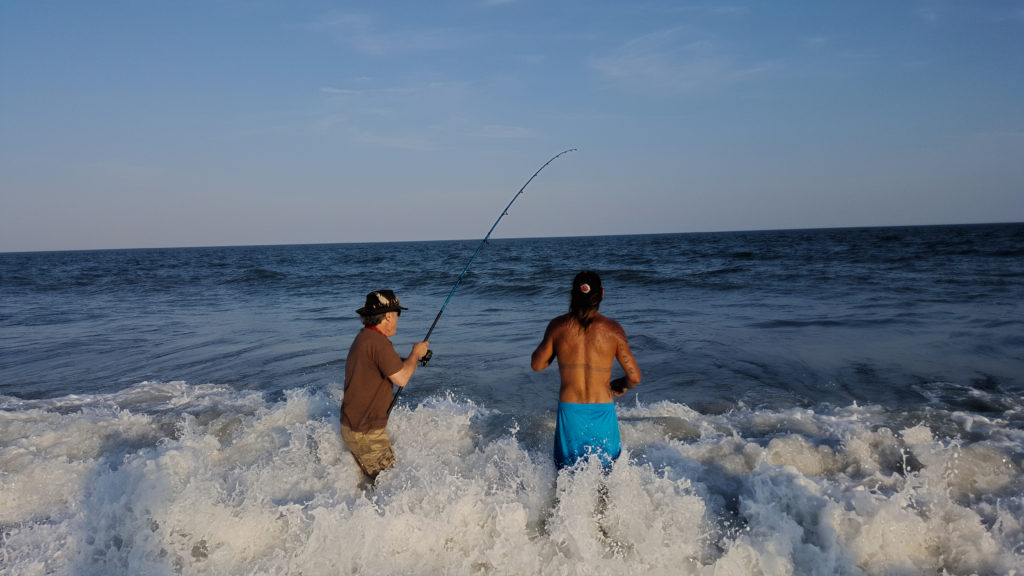 At this point, the big Ray actually broke water! It was awesome to see with it`s big wings taking to the air!
Eventually I tired(or I got tired! haha!) and landed the beast on the beach. 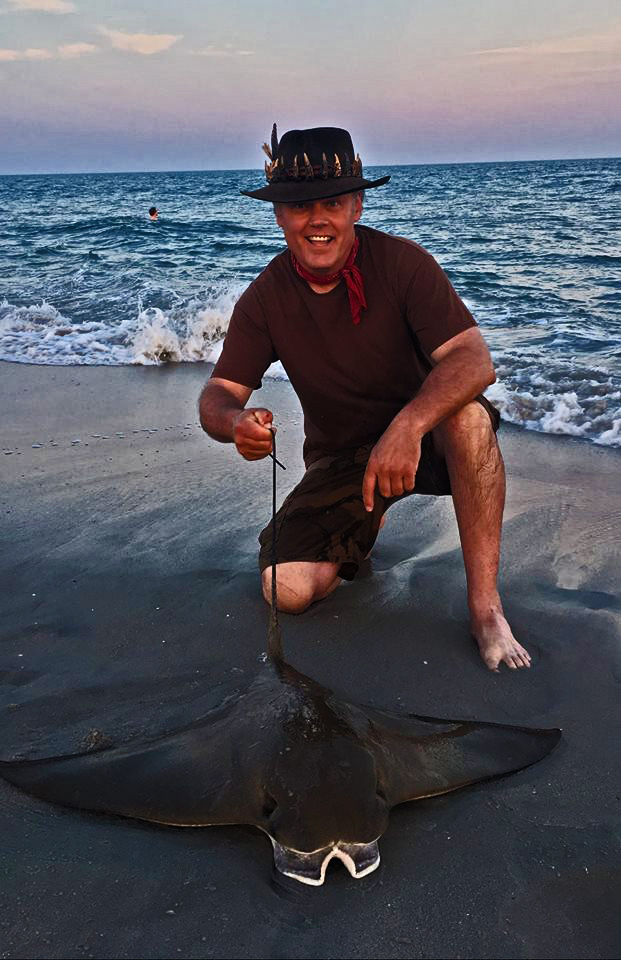 Next Mark and Scott had a “Double” on! 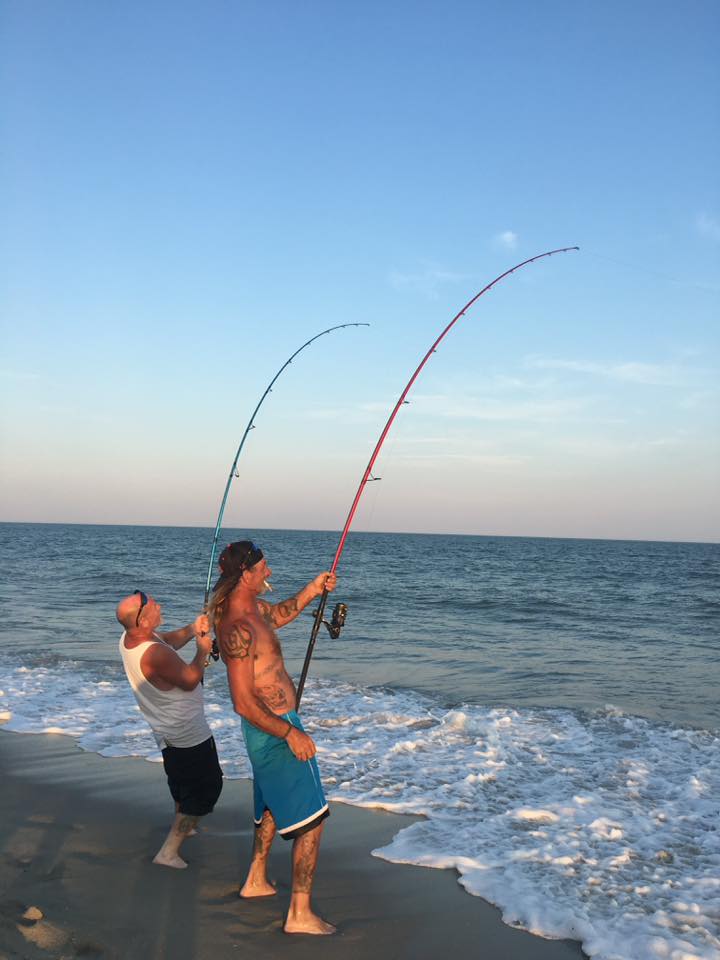 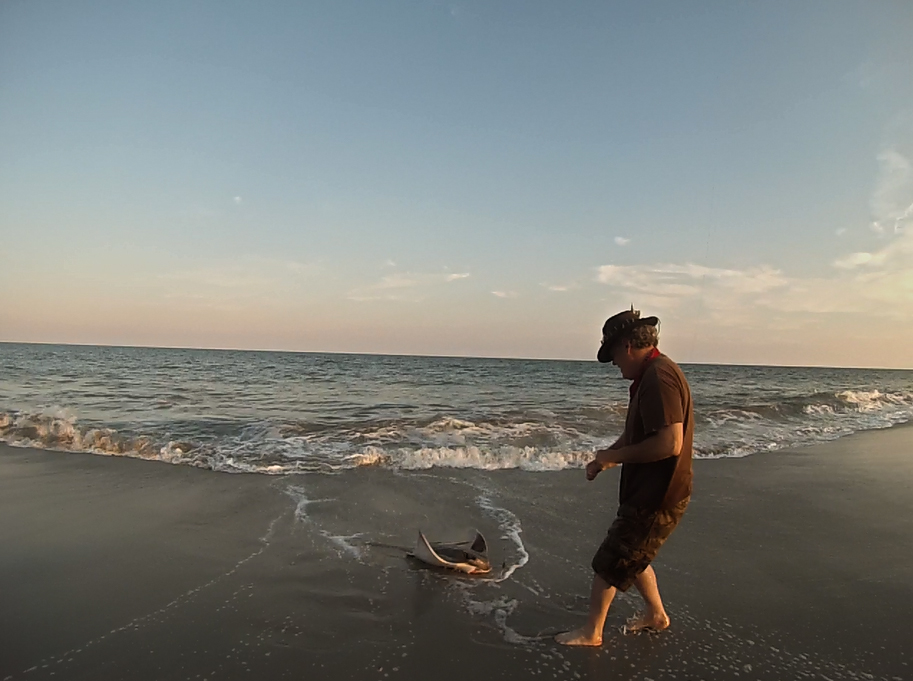 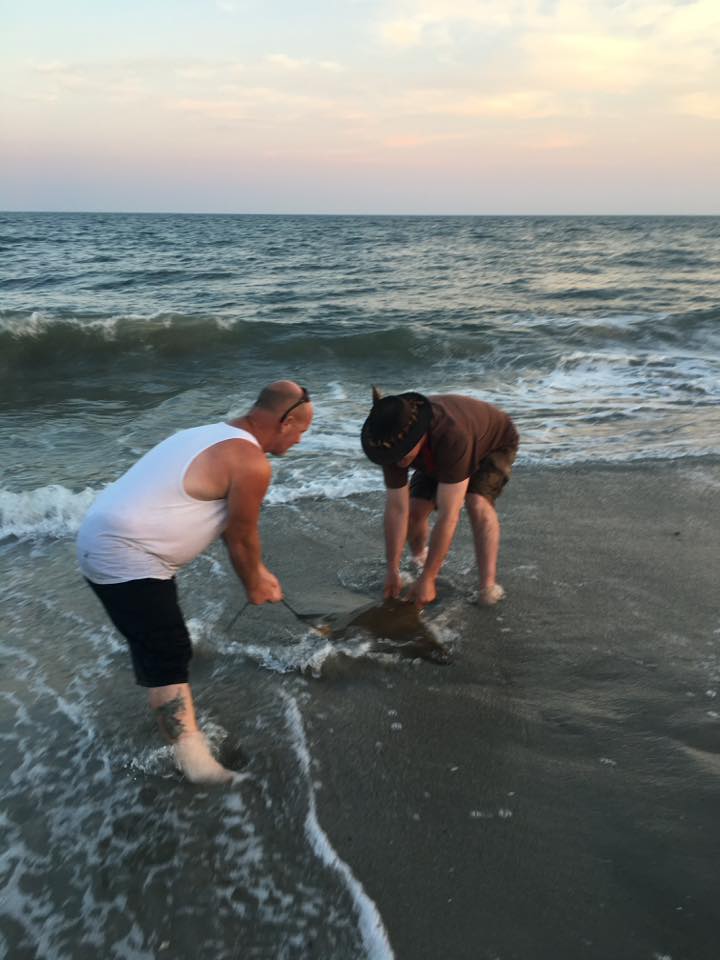 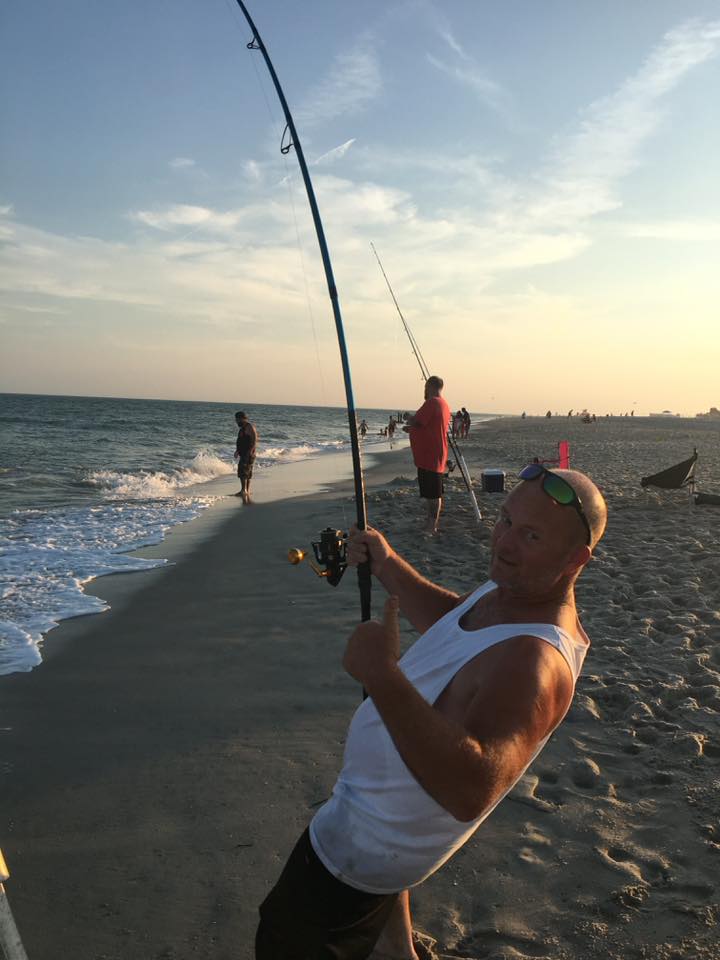 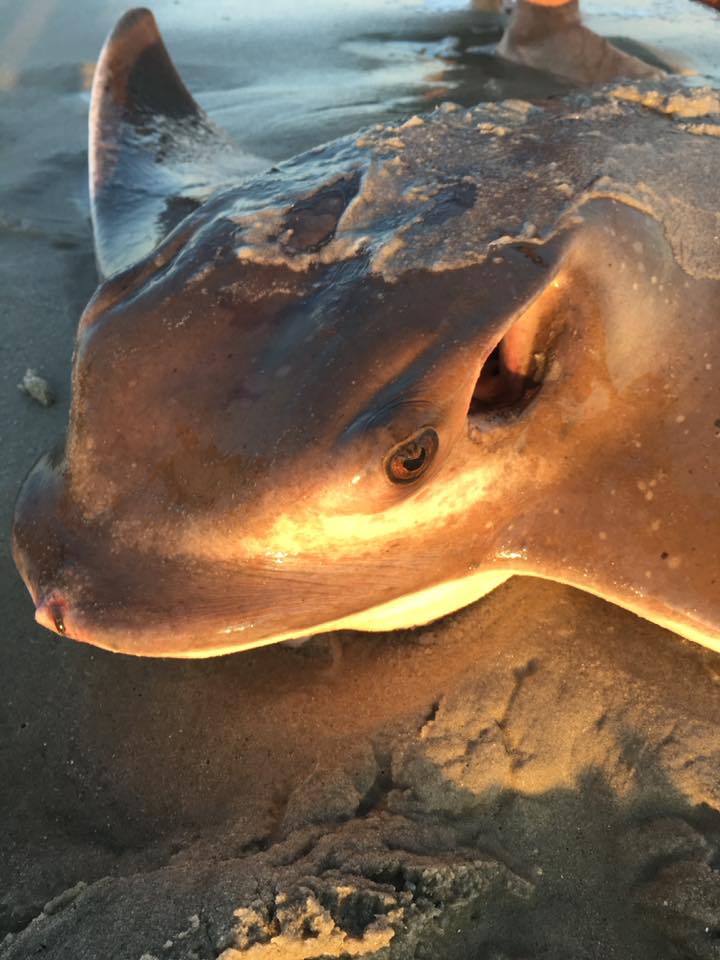 Then at dark, Scott caught a behemoth of a Ray! Had to go over one hundred pounds!
A Monster Butterfly Ray! Absolute monster! 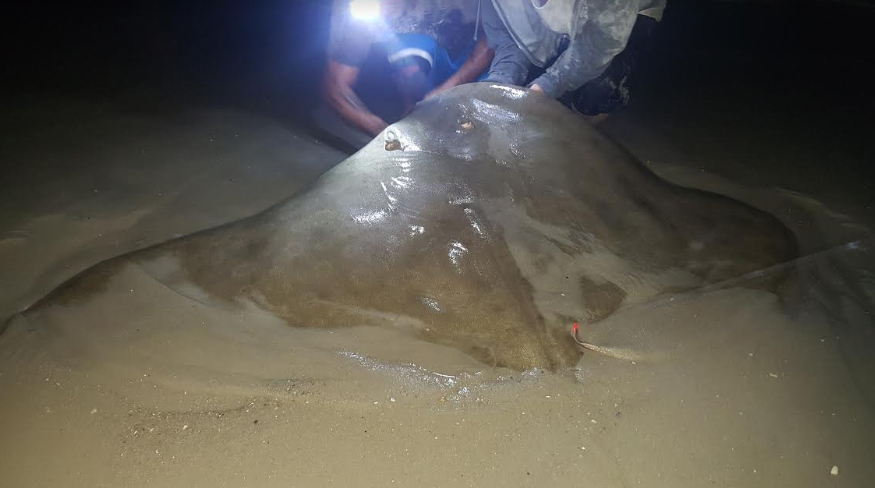 So while the sharks never showed up that night, it certainly was one big Ray “Party” and it was a blast! I can`t thank my gracious hosts Mark and Shelly enough for inviting me down. Just enjoyed everyone`s company immensely. I`ll be back…… after my Shark!
Till next time…..
Click here to see all of my Adventures

One thought on “Wranglin` & Tanglin` with Rays! A Cape May Adventure”