Whelp…… when that `ol July hot as hell Summer weather rolls in, I always get a hankerin` to load up the Yak and roll into South Jersey to have a go at one of my fave Toothy Critters…. Northern Snakeheads! And the forecast was lookin` pretty darn good, so I got a hold of my good friend Rob Morrison and made plans to meet up. Now let me tell you a little bit about Rob. We met by accident last year as we both happened to stop at the same spot one afternoon. We recognized each other from various Facebook pages that we both belong to. We shook hands and Rob said, “Hey would you like to try another spot? I think we`ll have more luck there this afternoon” – Me; “Heck yea… Lead the way Brother!” – I realized immediately that he was a really helpful, gracious fishing host. Just a helluva nice guy.

Last Friday we picked out a meeting spot based on my estimated travel time into Salem County. I left at 10am and arrived at 12:30 and after meeting, we drove another twenty minutes to our destination. Anxiously, we unloaded the Yaks and we were ready to wrangle up some Snakeheads! 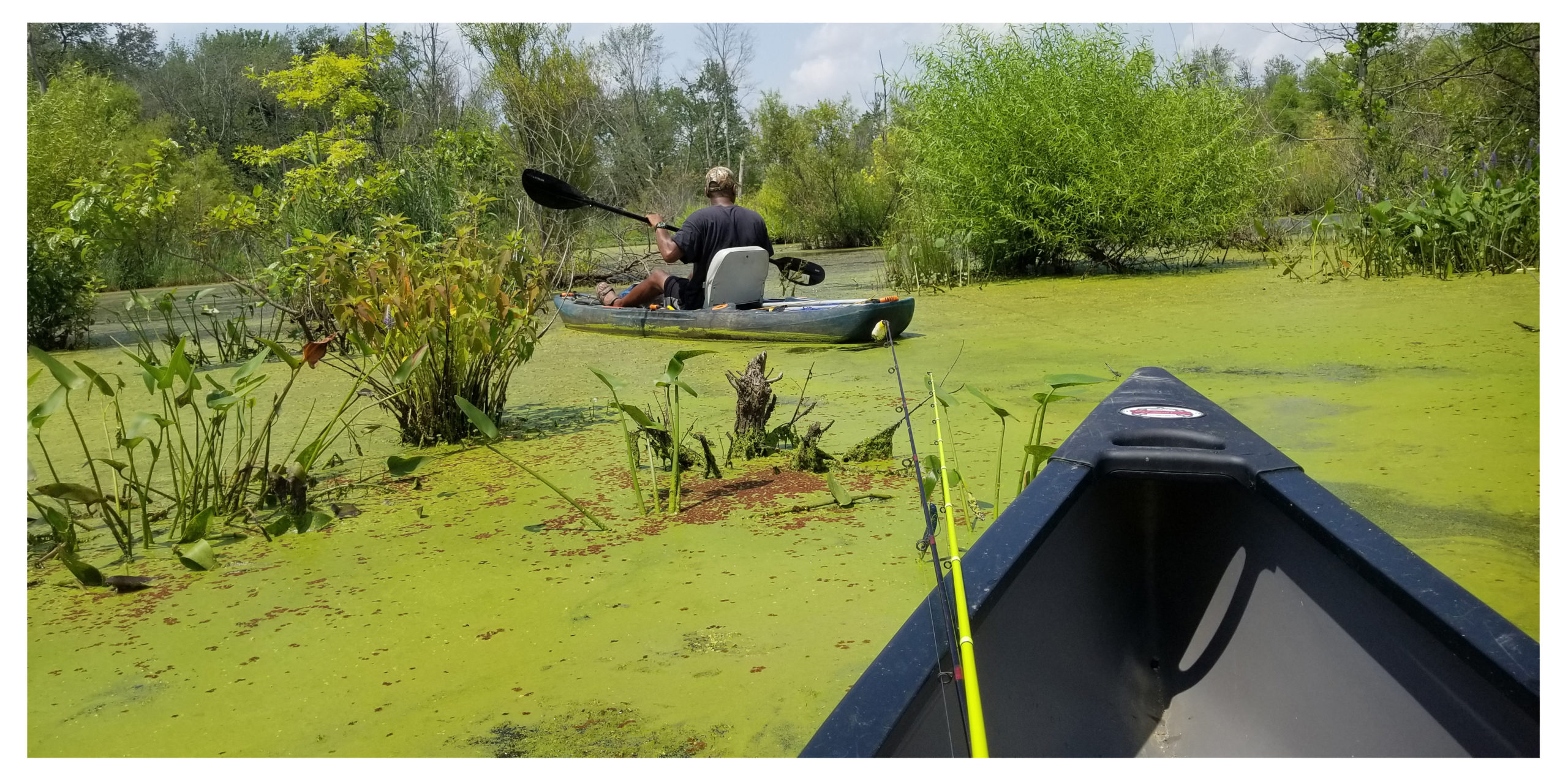 It was a scorcher in that swamp that afternoon, right around 95 degrees. Hell, I must gettin` a little older too.. I even listened to my co-worker Ralph and actually wore a sun-screen for the first time!

We slowly paddled our way through the thick duckweed. This was surely prime Snakehead Real-Estate territory without a doubt. Rob was throwing a top-water frog and I was tossing a Reaction Swimbait, which is my go-too lure for almost anything with teeth. In a matter of minutes, I had the first blow-up and lost the nice size Snakehead right by my Yak. Moments after that Rob yelled, “Hey Ken, get over here, I got a fry-ball man!” – I paddled up near him and saw the basketball-size fryball of baby Snakeheads. “Let`s get to it! Rob; “No no….you drove all the way down here, I want you to enjoy your time in the swamp!”
(See what I mean? That`s the type of guy he is)
I quickly started working my Swimbait into the Fry-ball in order to “piss off their Parents” – See whenever you find a Fry-ball, there are two Adult Snakeheads under it or right near it, guarding the baby Snakeheads. While sometimes it takes a while in order to provoke a strike, this time it happened on my third cast…… BAM! Snake on as I reeled back my Brand New 7-foot medium-heavy action Enigma Bait-caster set-up! The gallant serpent-like fish acrobatically exploded out of the water doing a few somersaults before landing in my net. On the board with the first one of many that day.

After working that part of the swamp for a few hours, Rob said “Let`s try the other side, but a lot further back” – I have to tell you, we got into the thickest, jungle-like swamp that I had ever been in. To a point where I wasn’t quite sure we could paddle through it. I mean this was crazy-ass thick. About half-way through, I hear a loud snap…… Rob broke his paddle in half as he tried to get through the thick overgrown marsh!  I said, “Well don`t break it in half again, we got a long way back to the vehicles!”  – I was quite positive not too many ever paddled back here at all. We both agreed that we needed to pay attention to the time as getting through this in the dark would be next to impossible. 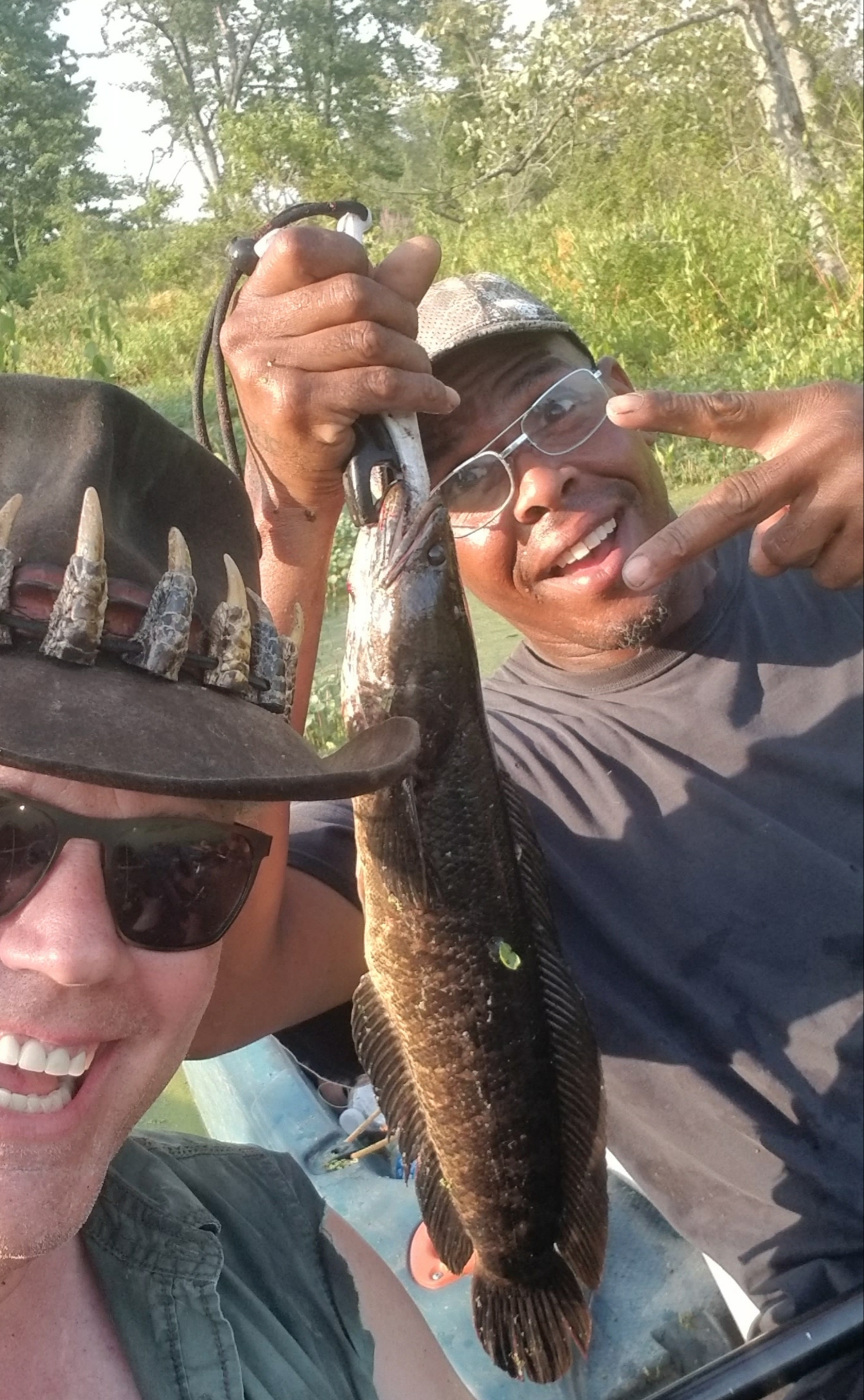 We paddled across an enormous open sort of lake and Rob mentioned that he had never been back this far. Eventually we found what appeared to be a little overgrown portage. As we paddled, it opened up into a duckweed, Snakehead/Bowfin haven……. we both agreed that few if any had ever ventured out here. In a matter of minutes we had all kinds of action! From swirls coming after our frogs to violent explosions! Rob landed a beautiful Bowfin and several Snakeheads quickly! We had more fun raisin` hell out there, bustin` on each other than I can ever tell ya.

By 7pm we decided to call it a day as it would be a long way back and we didn’t have any lights. We laughed and cussed all the way back to the vehicles! We ended up with a bunch of Snakeheads and a few Bowfins in the mix. 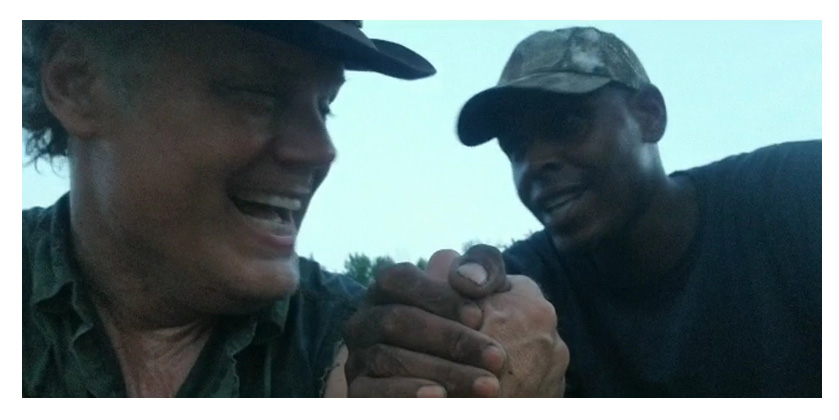 It was certainly a great day of fishing for a couple of good Friends.