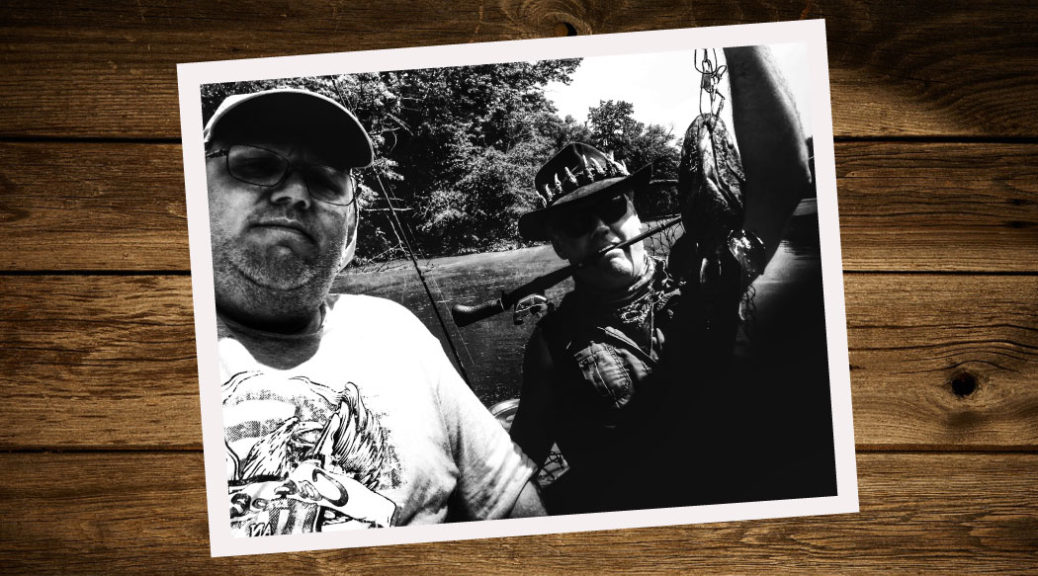 The hot, steamy Summer days of July have finally arrived. And with that, I usually get the itch to trek way down into South Jersey, to explore new swampy water-ways off the Delaware River. As the tributaries are home to the invasive Northern Snakehead. Which are in my opinion, one of the strongest fighting, best tasting fresh-water fish that you will ever encounter.
So last Saturday I got the hankerin` to load up the Yak and head south way before daybreak on Sunday. I got a hold of my friend John Walters and asked if he was interested in chasin` some Snakes early and calling it quits by noon. He said, “Yep, I`m in! what time ya headin` down?” Me; “I`ll get out of here by 4am and meet ya at the 7-Eleven by 6:45”  –
I arrived on the outskirts of Vineland at the 7-Eleven exactly at 6:50am and there was Big John waiting. After a hearty handshake, I grabbed a coffee and said, “Let`s saddle up and go get `em partner!” and away we went.
We finally landed at our remote destination, thirty-five minutes later. As we unloaded the Yaks and got set up, John handed me this rather huge sort of Chatterbait and said, “Here….try one of these Ken….. I lost a Snake that must`ve been close to ten pounds on one yesterday”  – So I tied it on my spinning rod set-up and commented that it looked like a great Muskie lure as well.
I got out on the murky, duckweed covered swamp and eagerly started casting the large Chatterbait John had given me. I only made four casts when I yelled, “Fish on John!…a Snakehead!”   –
As John started paddling out, the ferocious serpent threw my lure and was gone…….. “Man, he felt like a nice one” I exclaimed, “Hell, maybe that`s a good sign” I said to him. Within the next hour, John nailed a nice Largemouth Bass and said he had to strike his “Ken Beam pose” hahaha! 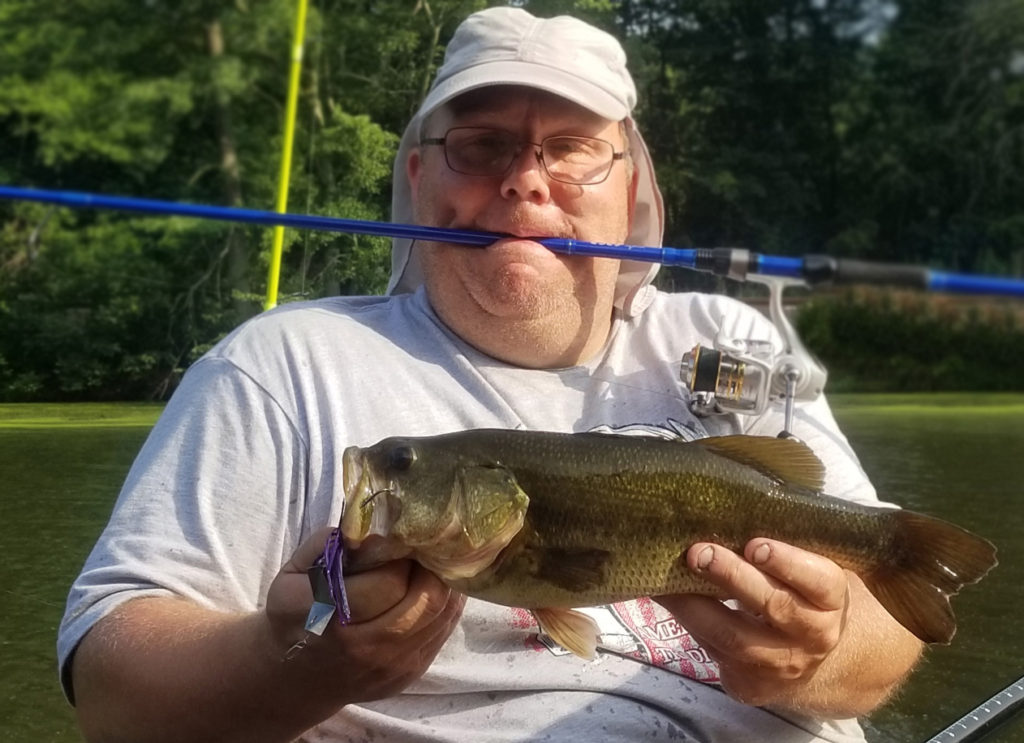 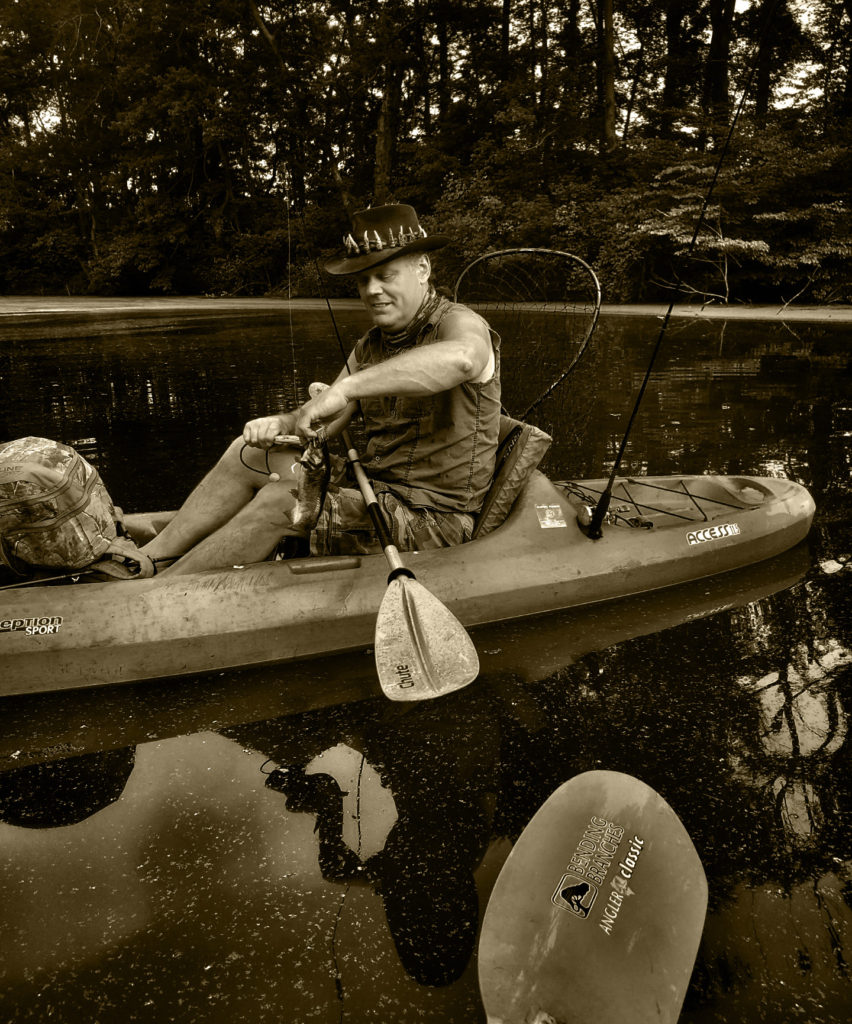 Now as for gear/set-ups; I usually always bring three rod-reel set-ups. One spinning reel and two vintage baitcasters paired with my fave pistol-grip rods. The baitcaster rod-reels are from the 80`s. All are paired with 30lb Power-PRO Braid. These are nice versatile set-ups that I can easily use for Snakeheads, Northern Pike, Bass and even a Muskie if need be.
Now back to our story……… After having fished for a few hours, I decided to switch to top-water. I had one blow-up on a frog that I missed and I actually thought may have been a Bowfin. Which is another one of my fave South Jersey fish to chase.
Then we split up and I veered off into this swampy cove that may have been two feet deep at best. As I paddled in quietly, I spotted an all-too familar site…….what appears as a orange basketball in the water. Immediately I recognized the large Snakehead Fryball! Hundreds of baby Snakeheads! 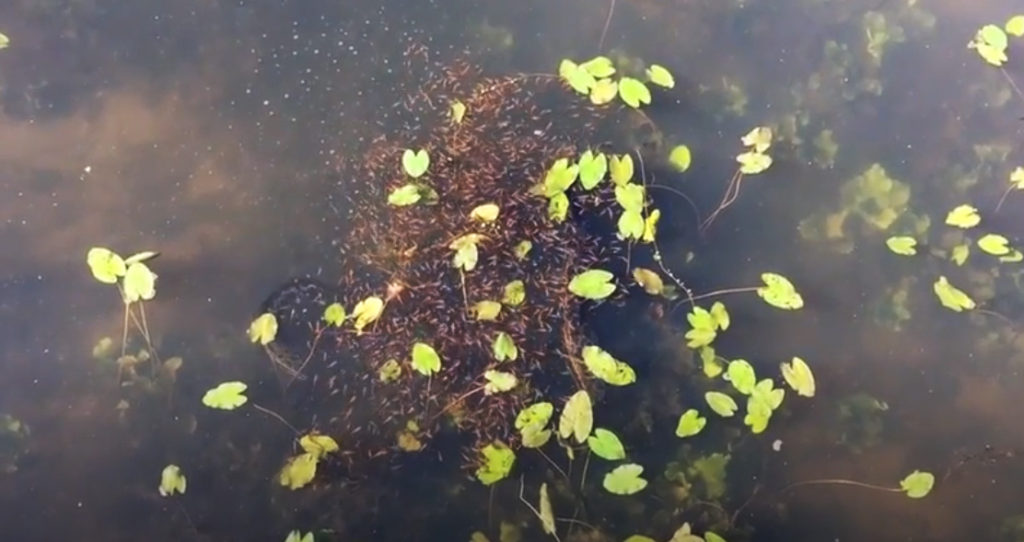 Whenever you see a Snakehead Fryball, there will always be a pair of adults either under or close to the “Ball” – The rule of thumb is to provoke a strike by agitating the adults and throwing your lure on or near the Fryball. I have never had any success throwing a top-water frog at a Fryball. So I went for the baitcaster that had a Reaction Swimbait on it. Rather than go on top of the Fry, I planned going right through or under them using the swimbait.
I tossed to Swimbait past the Fryball and slowly retrieved it………as it approached the “Ball,…….WHAM!!! A hug explosion broke the water as a Snakehead attacked my lure!! Fish on baby!! The drag peeled as I reeled back on the demon fish! The Snake literally broke water on the opposite side as it dove under the Yak! After playing out the dark beast for a few minutes, I finally netted it.

Shortly after that, we decided to call it a day as the noon-time hour was upon us. I shook Big John`s hand, thanked him for his hospitality and headed back up north.
Now here`s a little tid-bit about Snakeheads which I thought you might find interesting. Turn up your speakers and watch this short video;
Then the Snakehead met my other friend…….. my Bowie knife. And they make awesome fillets! 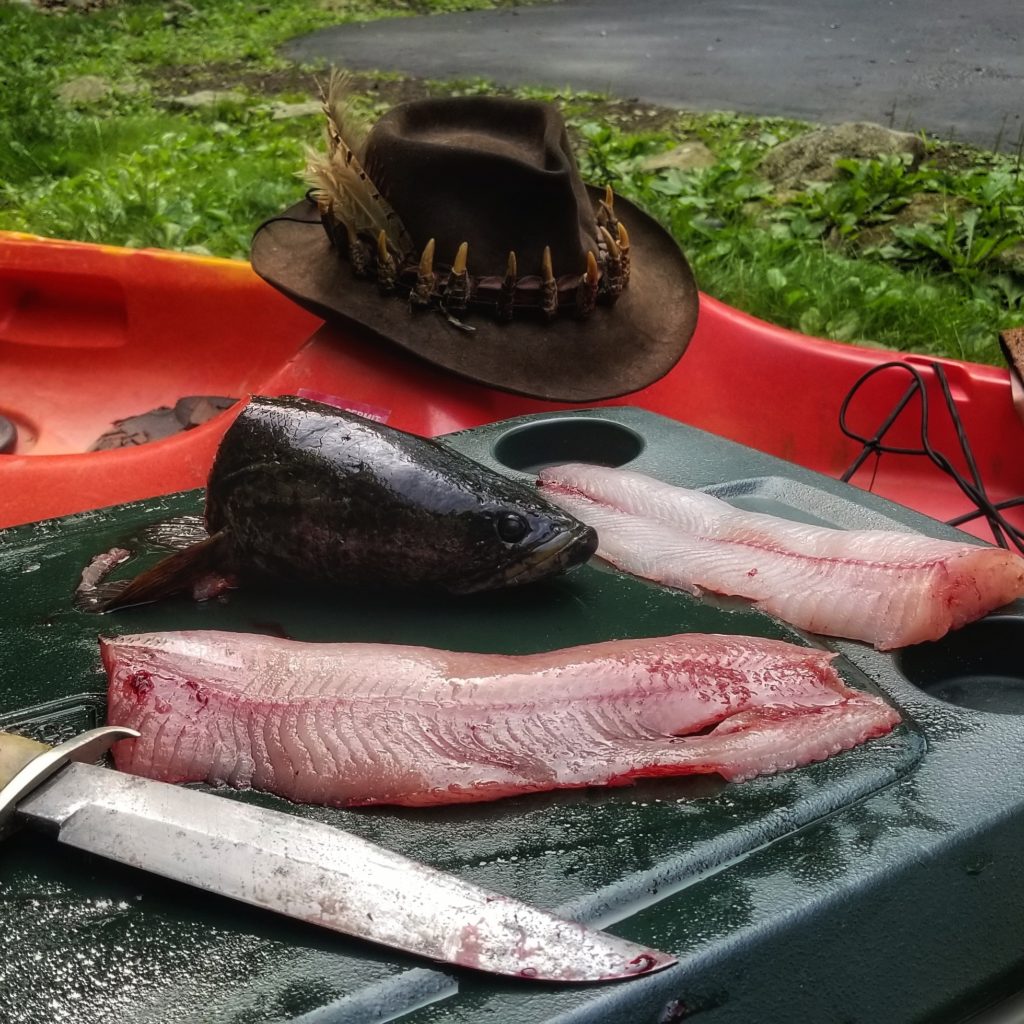 Then my lovely girlfriend kindly cooked me an absolutely Snakehead supper(which she knows I love!)

About those Snakeheads. They are here to stay and don`t believe everything that you read about them. For instance, we caught Bass in the exact same waters as the Snakehead and I have personally witnessed Bass dining on Snakehead Fryballs. So who eats who? Think about that. They are a fantastic fish to catch and make excellent table-fare as well.
I predict someday that the Northern Snakehead will indeed become highly sought after and recognized as a “Gamefish” in New Jersey. Maybe I`m wrong……. I guess time will tell.
`Till next time…….
See all of my Adventures here.
Thanks!
Ken-