So I`ve been seeing quite a few of my Facebook Friends, Bob, Kevin, Sandi and Vince posting a lot of pictures lately of the crappies that they`ve been catching and it got me thinking,…. maybe I ought to have go at them. Now up to this point, I had never specifically targeted “Slabs” myself, other than occasionally catching one by chance. But I have eaten a few a few of them that I caught and they were delicious.
Now I don`t about most of you out there, but when I want to pick up some tips or learn something, I immediately turn to YouTube. And that is exactly what I did the other night. I watched a couple Springtime Crappie Fishing videos and after a few minutes of “YouTube School” I was all set.
Now I bought a cheap little panfish/crappie kit from Walmart(my go-to fishing store! haha!) years ago, threw it in a drawer and never used it. Remember that little ultra-light rod and reel that I found last month buried in the snow? 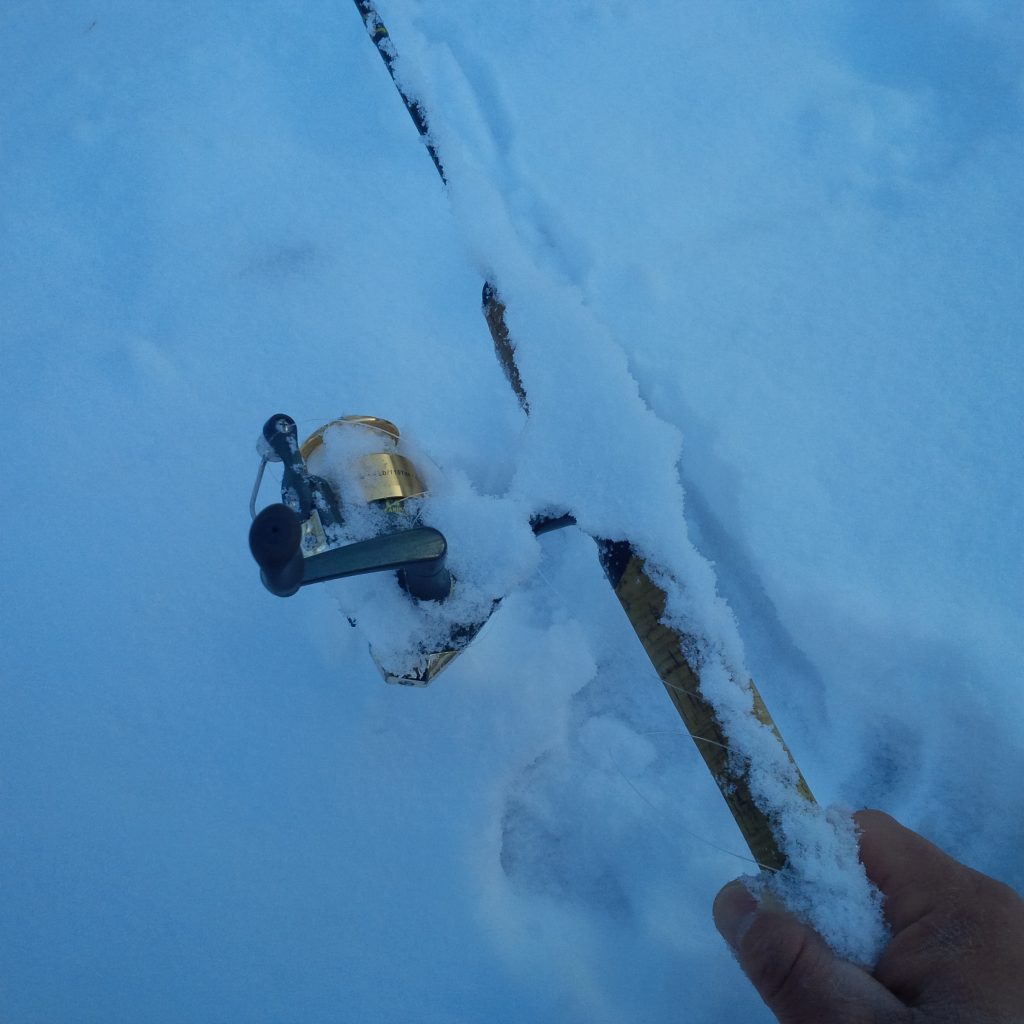 Spooled with 4lb test, paired with my Walmart panfishing kit, this would be the ideal Crappie-set-up.
The forecast the next morning, wasn`t sounding all that good……… very cold with a flood warning. “Hmmmmmm…… well…… I like fishing in the rain(but a flash flood??)” I said aloud, as I tried to convince myself as I loaded up the `Yak. I figured I had a window of about two hours before the heavy rains blew in.
And it was rather “chilly” out to say the least………..As I took this picture in the Murano as I drove out. 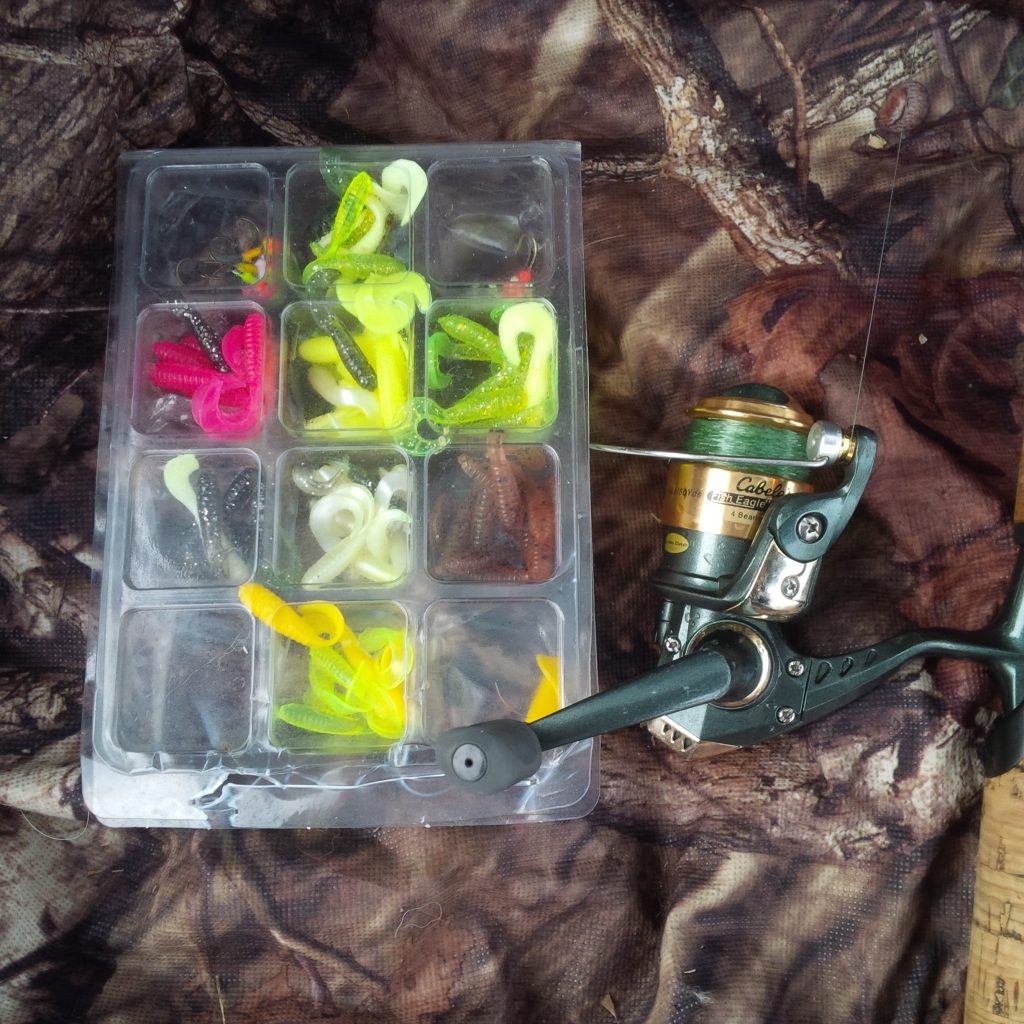 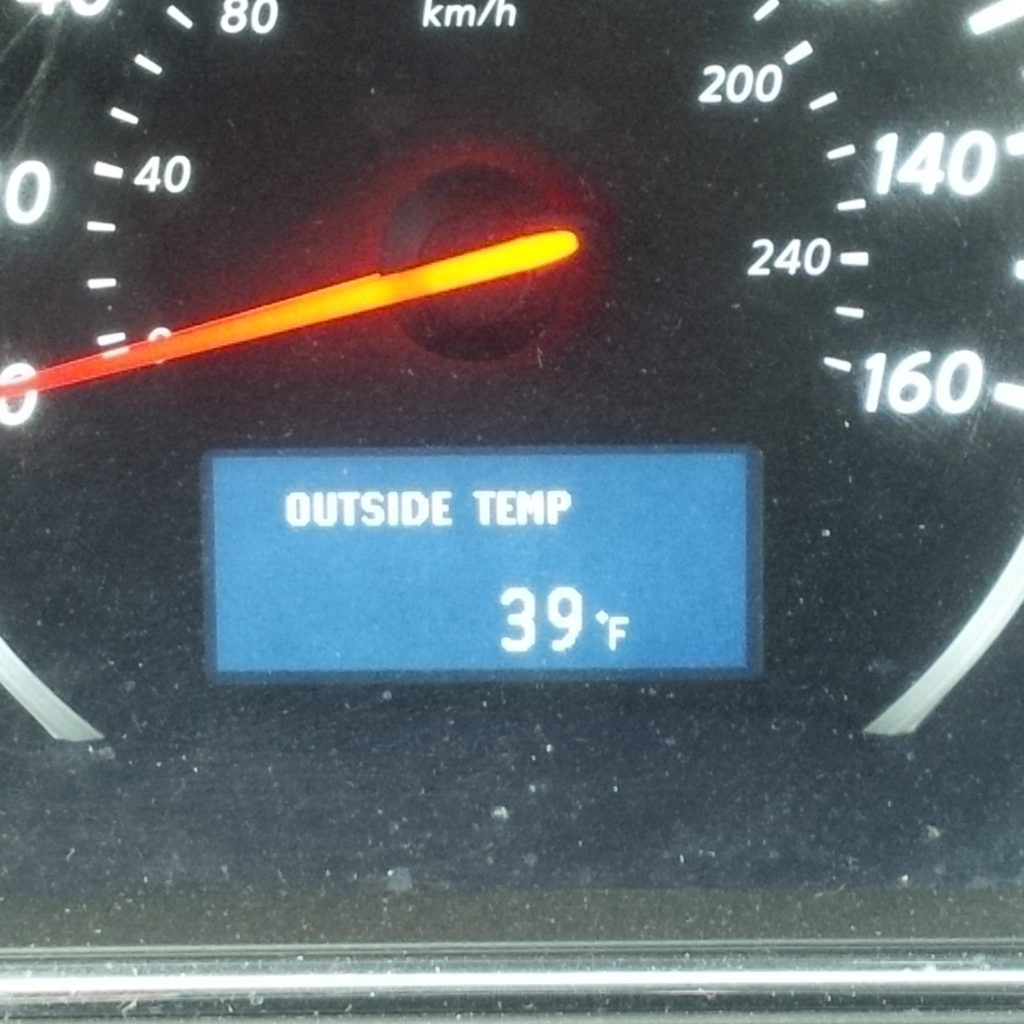 I launched and started working a low-lying edge of the shore that had a nice drop off. I was using a pink jig with a white grub tail. Immediately on my third cast, the bobber went under! Fish on! Well well…….. my 1st crappie of the morning. 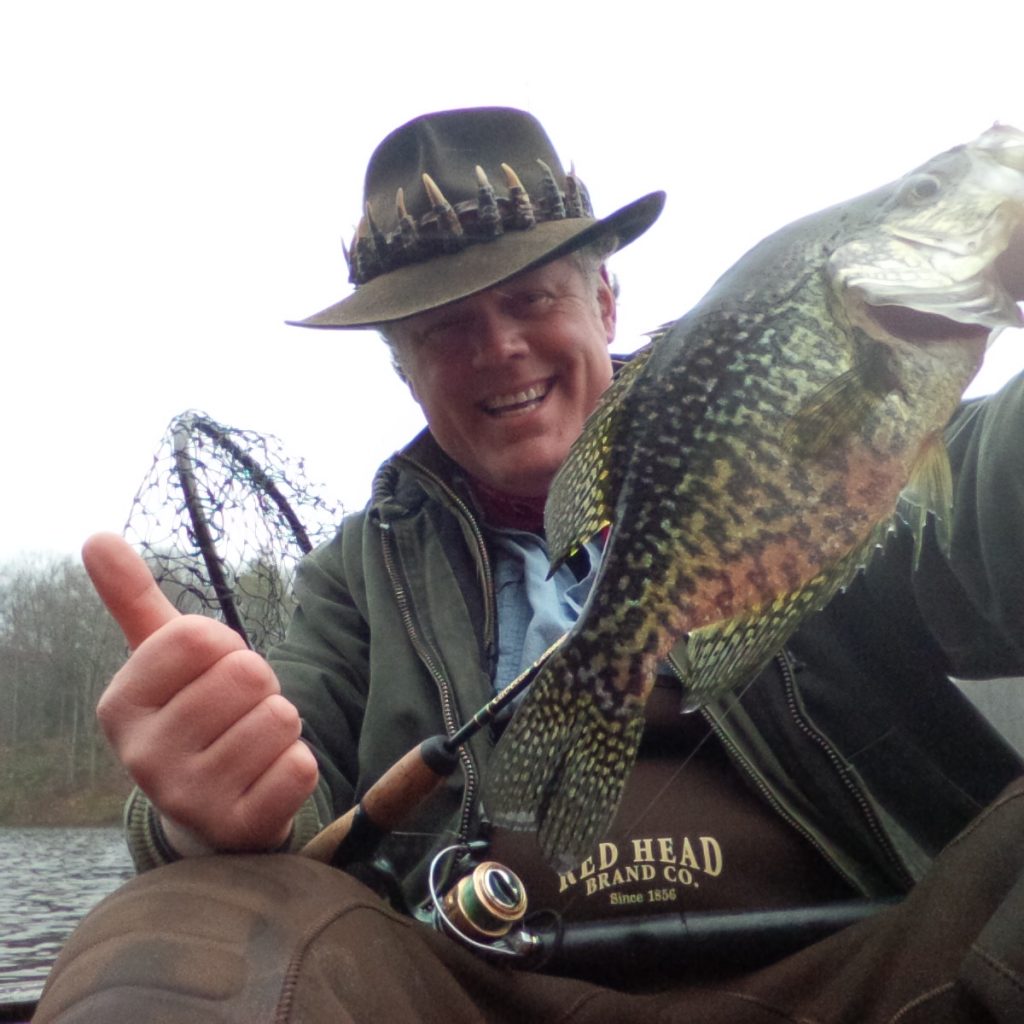 Now I forgot a couple things that morning; 1.) my light-weight wading pants 2.) my PDF 3.) a cooler to put my fish in.
So as you can see, I had my neoprenes in the Murano and no life-jacket. Definitely not the smartest thing to do. Especially when the water is as ice-cold as it is, you don`t want to accidentally flip the `Yak wearing neoprenes. So if any of you younger fishermen and fisherLadies see this, please don`t try this. Also I didn`t have a cooler to put my catch in, so they all went back to swim another day. Which isn`t a bad thing at all……. but I do like to eat `em!
As I worked my way around the edge of the shoreline, I targeted any brush/debris with my jig that I could find. I managed to wrangle up a few more in the `Yak, before the rain stated coming down steady. 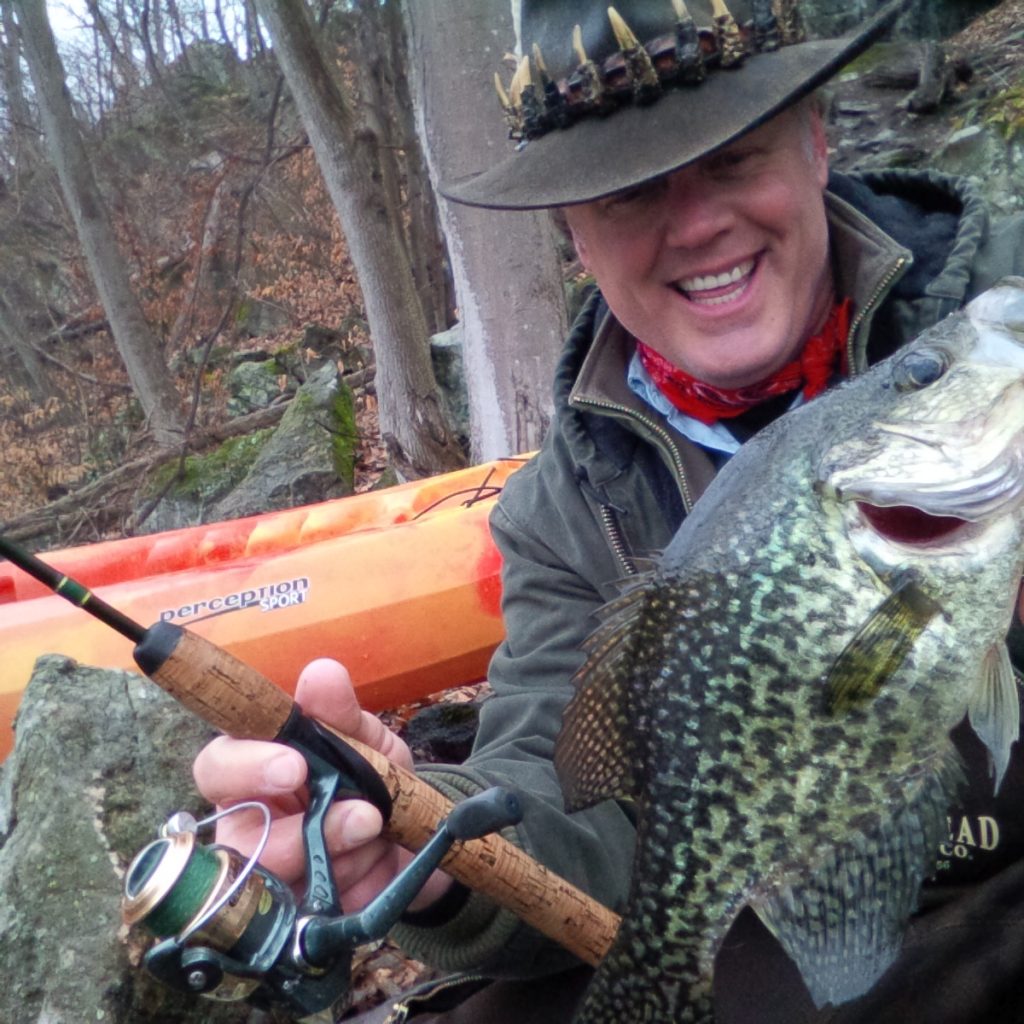 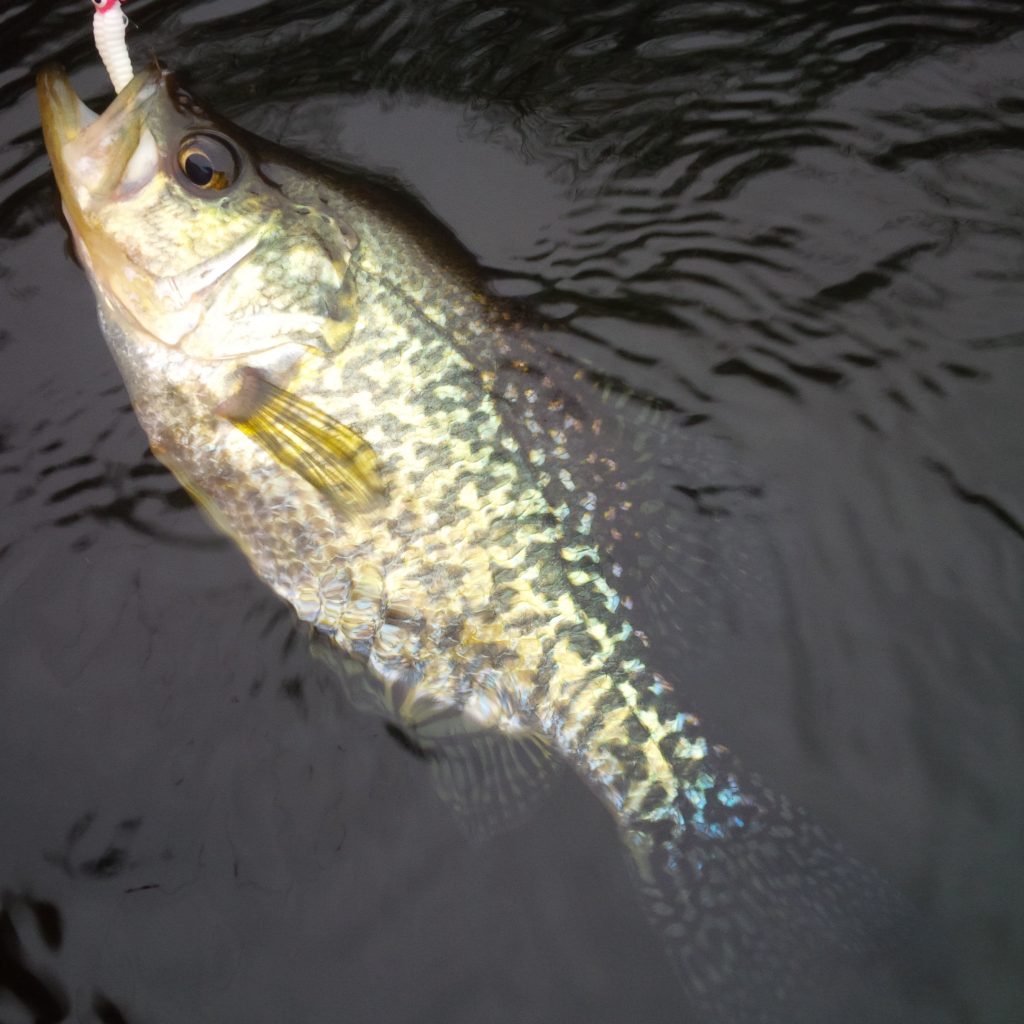 Then after about an hour and a half, It really started coming down. Figured I`d take a couple more casts and get the hell out of Dodge before I got caught in a torrential down-pour.
As I started paddling back, I made a couple quick casts……. and Bam! The bobber was gone! Crappie on! And a nice one at that 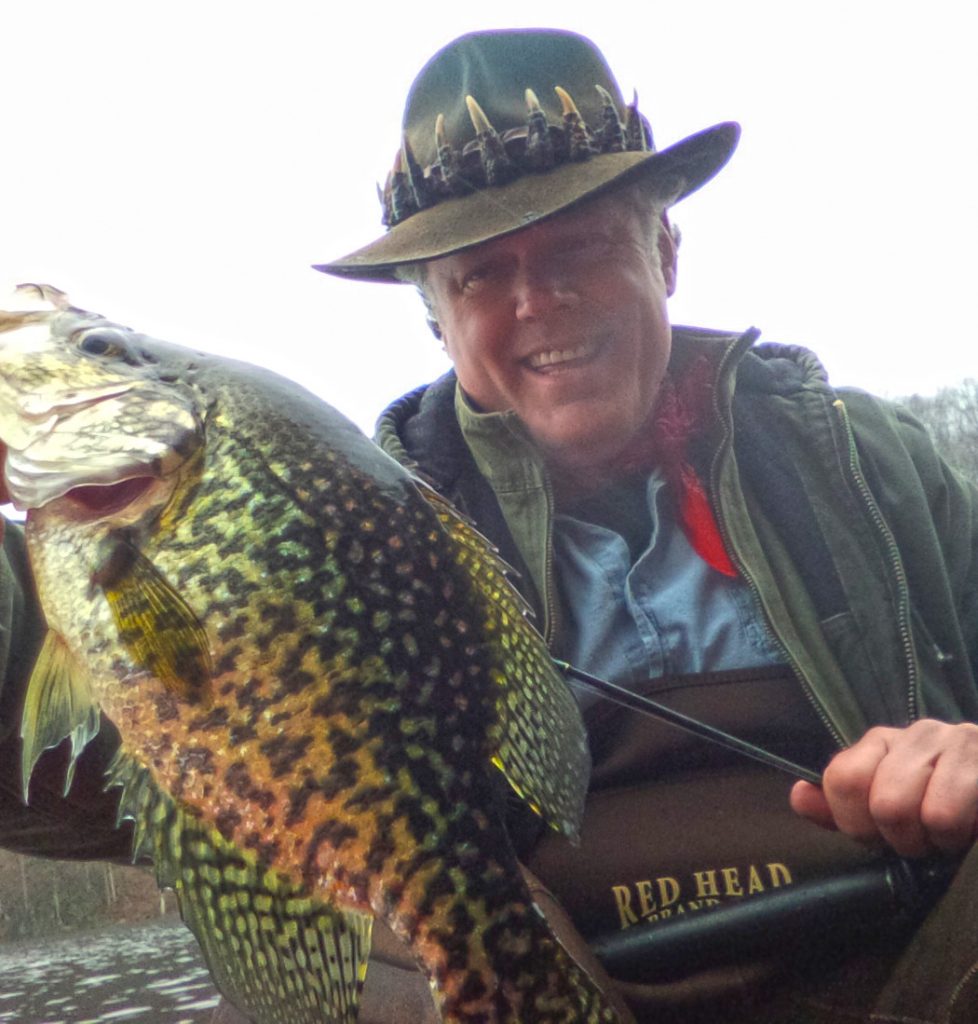 I didn`t have anything with me to measure that monster Crappie, my fifth of the morning. And now with the thunder and lightning directly over me, I took a couple quick pictures and released that big Slab to swim another day. “Man….. I loved this!” I said to myself as I paddled to shore in the heavy rain.
And in the words of my friend “Hurricane Sandi”…………
Slab-ba-Dab-ba-Do! I`ll be back for you!
Till next time..…
See all of my Adventures here

4 thoughts on “A Crappie Adventure on a Crappy day – Slab-ba-Dab-ba-Doo!”