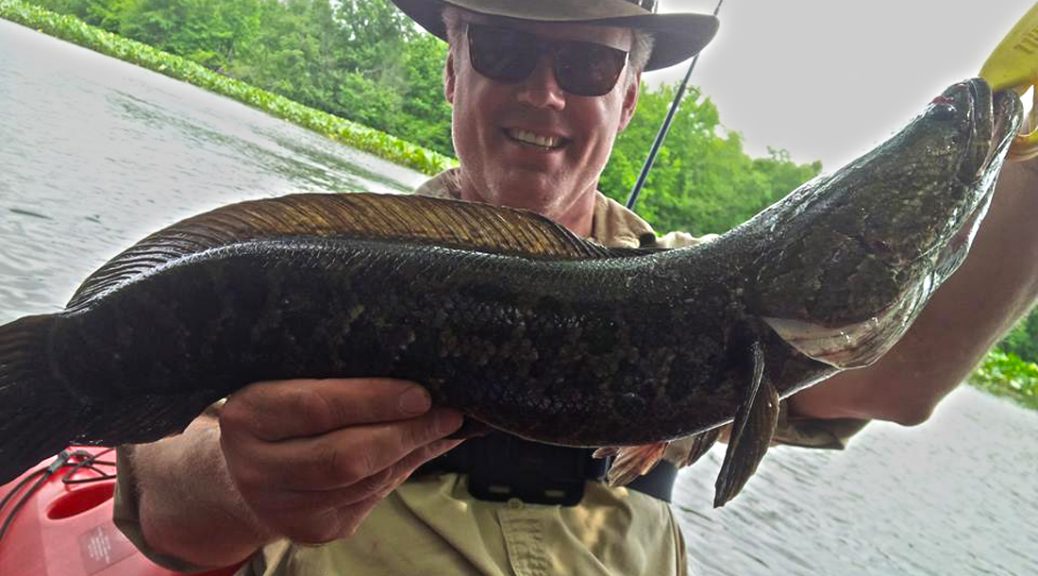 One of my “Targeted” fish this year was a Snakehead and I took off last Friday to meet up with the man that probably catches more Bowfin than anybody else in the entire state of New Jersey, Mr. Bob Priest. Now “Bowfin Bob” catches hundreds of Bowfins each year, and he certainly catches a lot of Snakeheads as well. So after having a few conversations on-line, I decided to see if we could set something up to have a go at those “Snakes” together in the `Yaks. I told Bob that if he could put me into some Snakeheads, that I would gladly put him on some Northern Pike whenever he wanted to come up north. He agreed and plans were made to meet up on Friday morning.
After walking the pups and having supper with Sharon on Thursday night, I set out to the garage to start setting up my rod and reel combos as I decided to take three set-ups down there with me at daybreak. Each reel was stripped down, oiled up and spooled with 20lb. Power PRO braid line. Next I went through all of my gear. Setting up my tackle bag with all of those brand new top-water frogs/lures that I had bought on-sale after Christmas at Dick`s last winter specifically with Snakehead fishing in mind. Loaded up all of my gear, then loaded up my `Yak, then off to bed. I was psyched and hardly slept a wink that night.
Met up with Bob at a WaWa around 9:30 on Friday morning and we made our way to a tributary that was only about two hundred yards from the actual Delaware River. The ideal spot for these invasive demon fish.
As we unloaded the `Yaks, Bob said, Now listen Ken, I said I`d show the area where Snakes are, but the rest is up to you” sort of like he was prepping me in case I couldn`t work a little magic and wrangle up one that day! I said, “No expectations Bob……. Let`s get to it!” –
Bob suggested that we each work a side so we split with him going left and me to the right. Within the first hour of fishing we were “on the board” as I landed a little Bass that was about 15 inches long using a Ribbit Frog. This got me pretty excited as this was also my first time using top-water lures.
After fishing for a few hours, I got into some really shallow water and switched to my other set-up which I had rigged with a KVD top-water Frog. I diligently worked the edges of the lily pads with the frog……..then it happened….BAM! Fish on! And it felt like a decent fish as the drag started screaming…At first I thought, “Might be a nice Bass”……but then as I got it closer to my `Yak, it thrashed the water and appeared to be really dark…….. Could it be a Snakehead? Or was it a huge Largemouth Bass?
I got it closer and the mighty fish violently thrashed the water again showing itself…… “It`s a Snakehead!”, I said out loud and quickly went for my net!
So without any further ado, here`s the Go PRO Video of the day`s adventure way down in South Jersey; 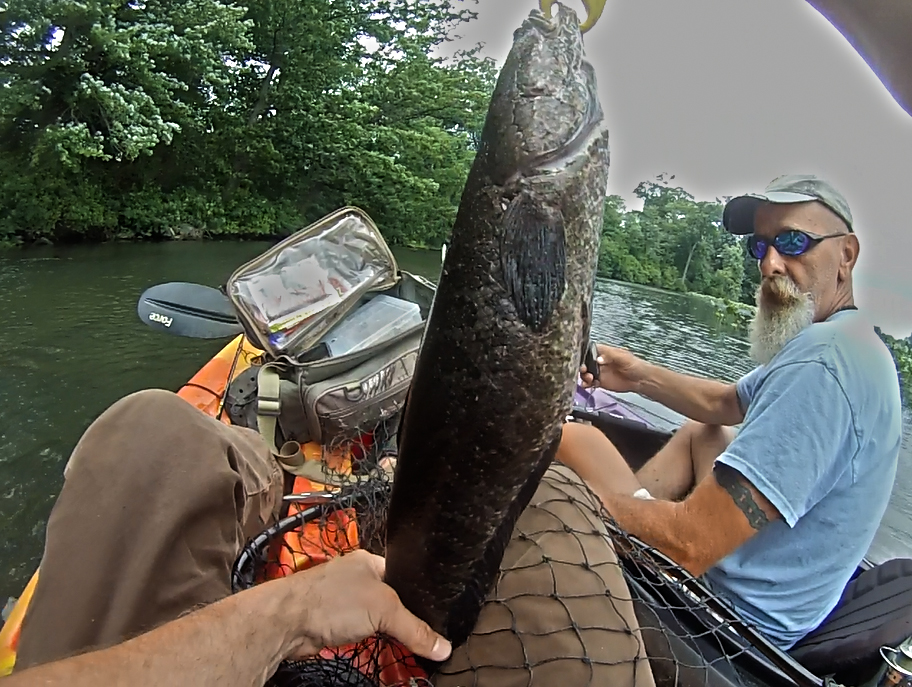 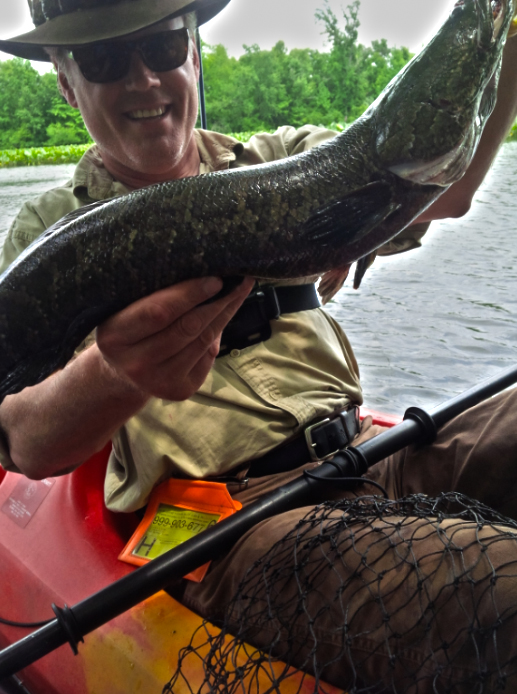 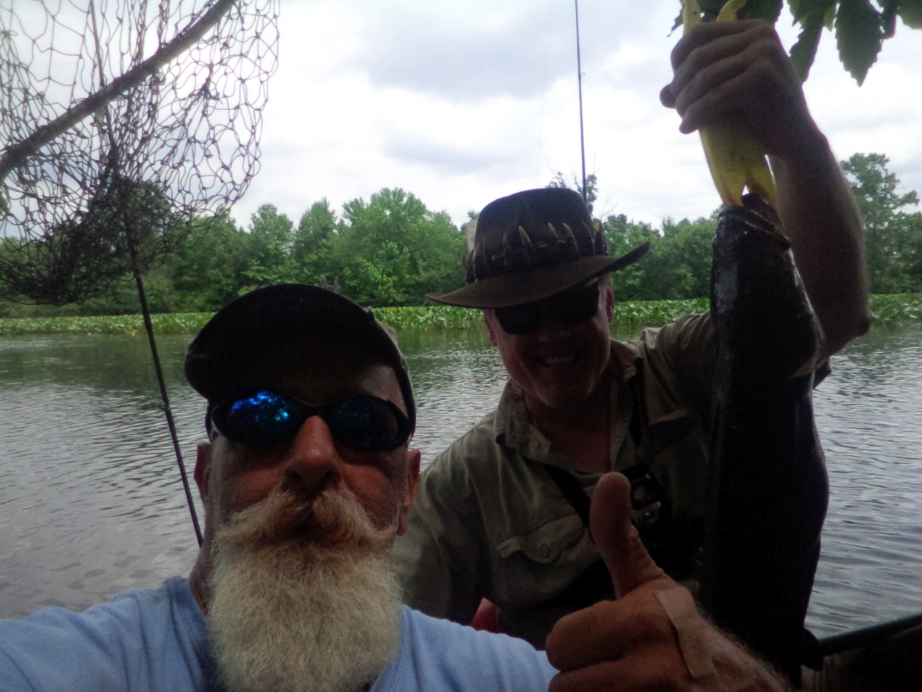 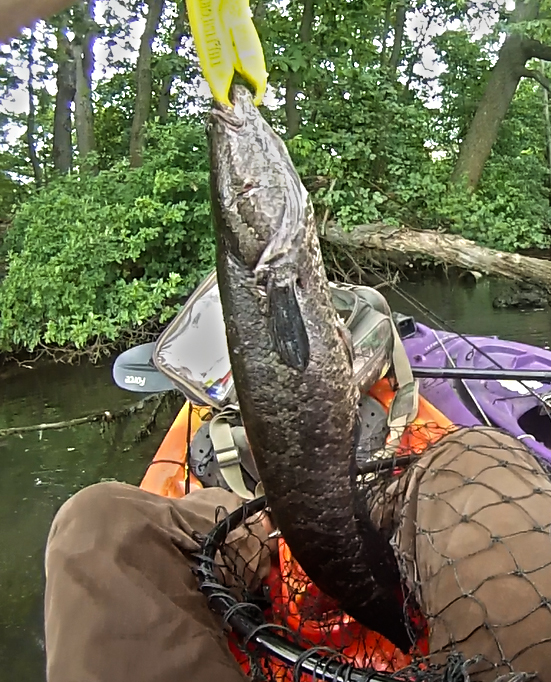 **Scroll down to see more pictures
Till next time…..