The infamous, invasive Flathead Catfish. Some hate it, some love it. Personally it has always been quite the River Monster that has always piqued my interest. So when one of the members from the NJ Fishing
Facebook page; https://www.facebook.com/groups/731226176980747/, John Fasanello invited me, hell… no wasn`t even an option!
Plans were made to rendezvous at 9pm and head down to the Delaware River to begin our all-night, “Johnnie Cat – Shovelhead” fishing adventure. It was a perfect, cool-air late August night. As the temperature had dropped into the low 60`s, the chilly air indicated Summer was fading away.
John had wrangled up some live Sunnies earlier in the afternoon to use as bait, as live bait generally works best when trying to entice one of these river monsters to “dine” from the dark depths of the Delaware. He was using 40lb mono on his set-ups while I went with 65lb braid on mine. My gracious host supplied the “No-roll” sinkers with 8/0 Gamakatsu Circle Hooks as well. We got all set up and John explained how he hooked the entire Sunny from eye-to-eye then snipped off a piece of the tail in order to slow them down and get some blood in the water.
Now we were fishing…………
At 10:40 John yelled, “Hey you`ve got some action!” – So I hustled back over to our poles! I could hear the line peeling off the reel! “That is most definitely a Flat” he exclaimed, “A Channel Cat won`t act that way” – I picked up the rod and could instantaneously feel a very heavy fish tugging down deep. I began to tighten the drag in order to set the hook, which basically means just reeling in when using circle hooks. I reeled up and felt a huge fish dive deep! Fish on! I continued to work the monster for several minutes in the dark water……then……….Fish off. Ughhhhhhhhhh! “Man that felt like a nice one” I said to John. He replied, “Ahhhhhhh sometimes they just don`t get hooked quite right…..try it again!” –
We talked for hours sitting along the river and he explained how he had became infatuated with Flatheads over the years and how delicious they were as table fare. I had read that they were very good eating and that they actually tasted a bit different than a regular Channel or Bullhead Catfish. With that thought in mind, I most certainly had hoped to have the pleasure of introducing my knife to one of these river monster Flatheads.
Later in the night, my reel began to peel once again! I picked up the rod, smiled and said to John, “This one can swallow it!” – John watched the line and said, “That might be a Channel Ken……not really running like a Flat” – Then I literally felt nothing…….almost like I was hung up. John asked, “Do you feel him? Is he pulling at all?” – I said, “No…… I don`t feel a damn thing now” – I waited a few minutes to see what would happen…… nothing. I said, “Dammit….he must`ve dropped it I guess” and started to reel in………… WOW!!!! Fish on baby!!! Holy cow!!! Apparently he had grabbed the Sunny and just laid there eating it! I pulled back as the beast dove deep into the rocks or debris. He actually felt like he was trying to bury himself right in the rocks! A very strong fish indeed! This was awesome!!!
John shined a light in the water as the beast got closer………all of the sudden we saw the murky, brownish Flathead coming up from the depths of the Delaware! John said, “Walk it back Ken and I`ll grab it as you get it closer!” – With that the monster was rolling right at the edge of the water and he grabbed the beast by the mouth and hoisted it to shore!
Certainly a monster fish to me as this was the biggest freshwater fish I had ever landed……15lbs of Flathead fightin` fun! 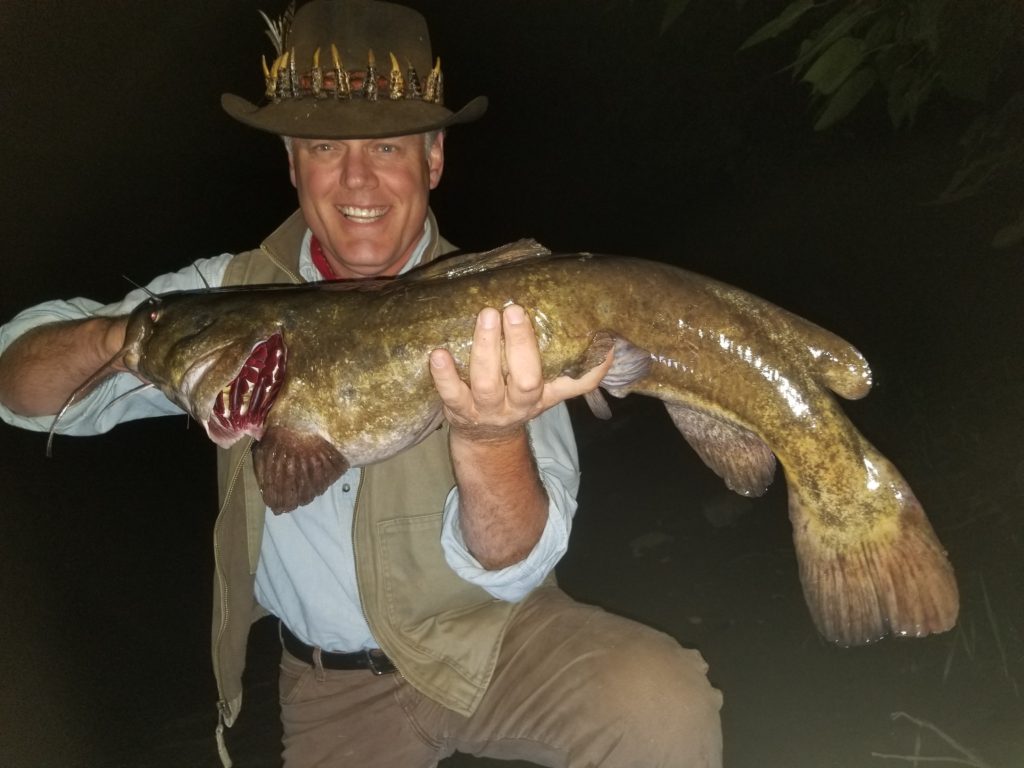 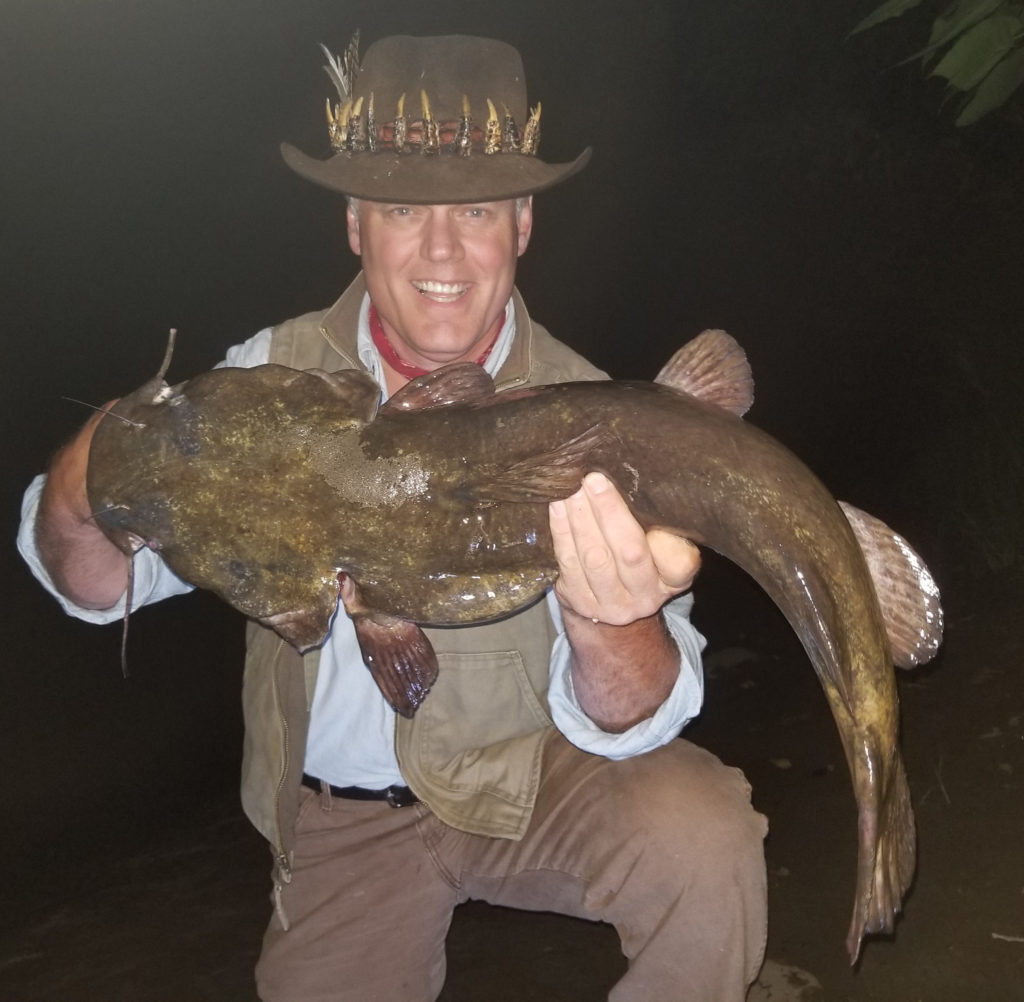 A couple hours later, I landed a really nice Channel Catfish. Probably went about 5 or 6lbs. Perfect eating size! We finally called it a night(morning! haha!) at around 4:15am…. John said, “Ya know I`m usually the one that catches the fish when I bring somebody out with me not the other way around Ken!” — Both laughing I replied, “Ahhhhhhh…..beginner`s luck!” – I offered both of my fish to my gracious host and he said, “Absolutely not, you have to take home your first Flathead” and I said, “Well then the least ya can do is take my Channel Cat John” – That he agreed to and we hiked out of the forrest in that chilly morning air. 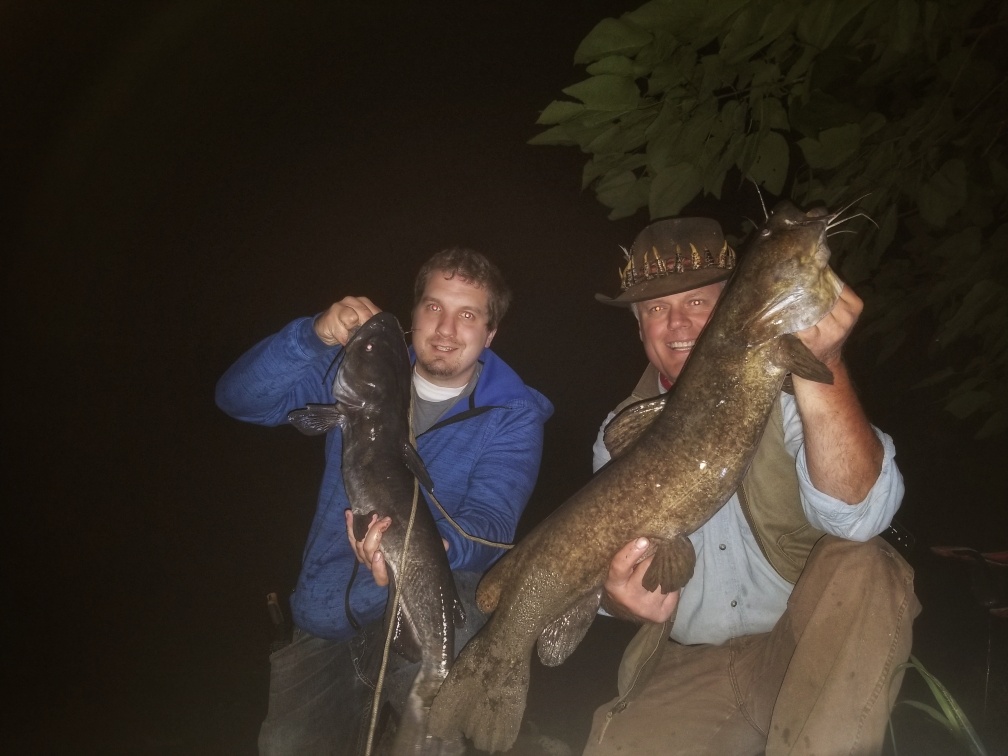 I rolled in about 5:30am on the nose, iced down the Flathead, took to pups out(caught hell from Sharon cause I stayed out all night! haha!), took a quick shower and went to bed to catch a little shut-eye for a few hours.
Got up around 10 and planned on filleting my catch as Sharon said she would cook it for my supper later that night when she got home from work. (By the way, she is a fantastic cook……she won`t eat whatever I drag home, but she always prepares a gourmet meal no matter what it is!)
So I began filleting the beast of a fish……. 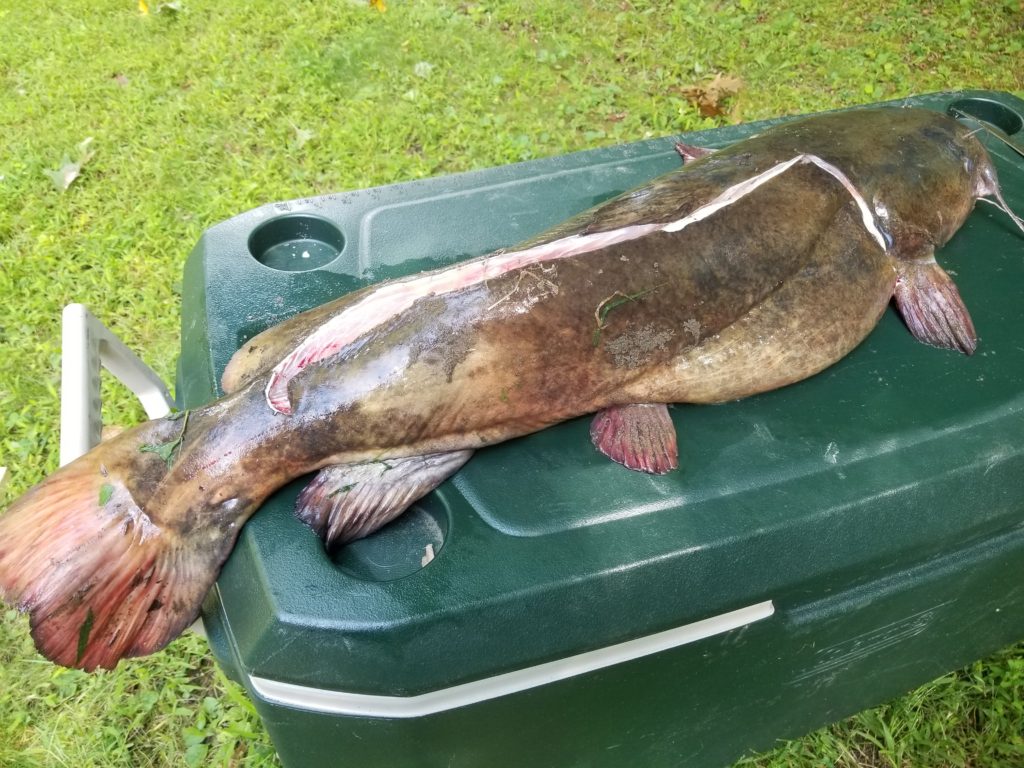 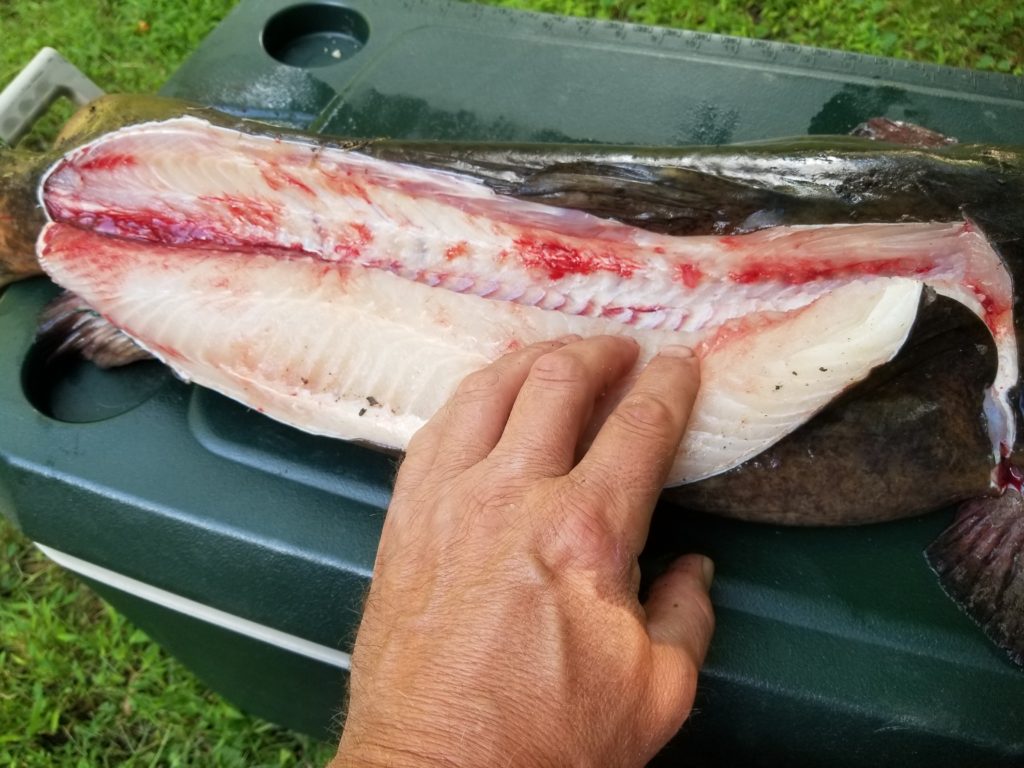 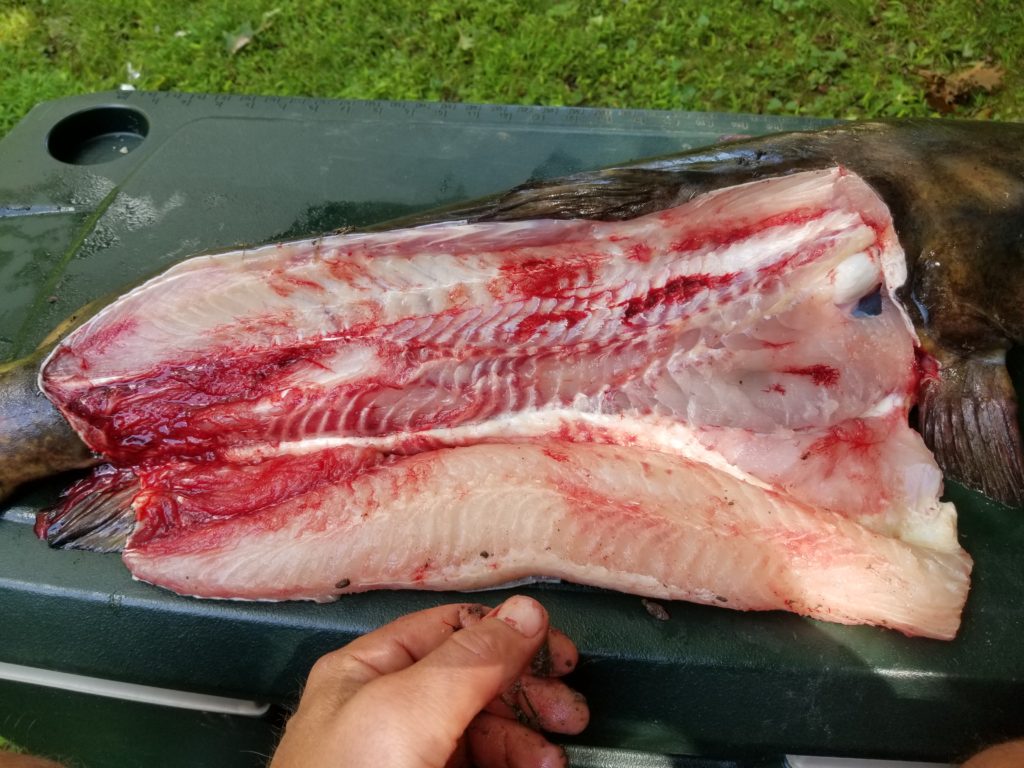 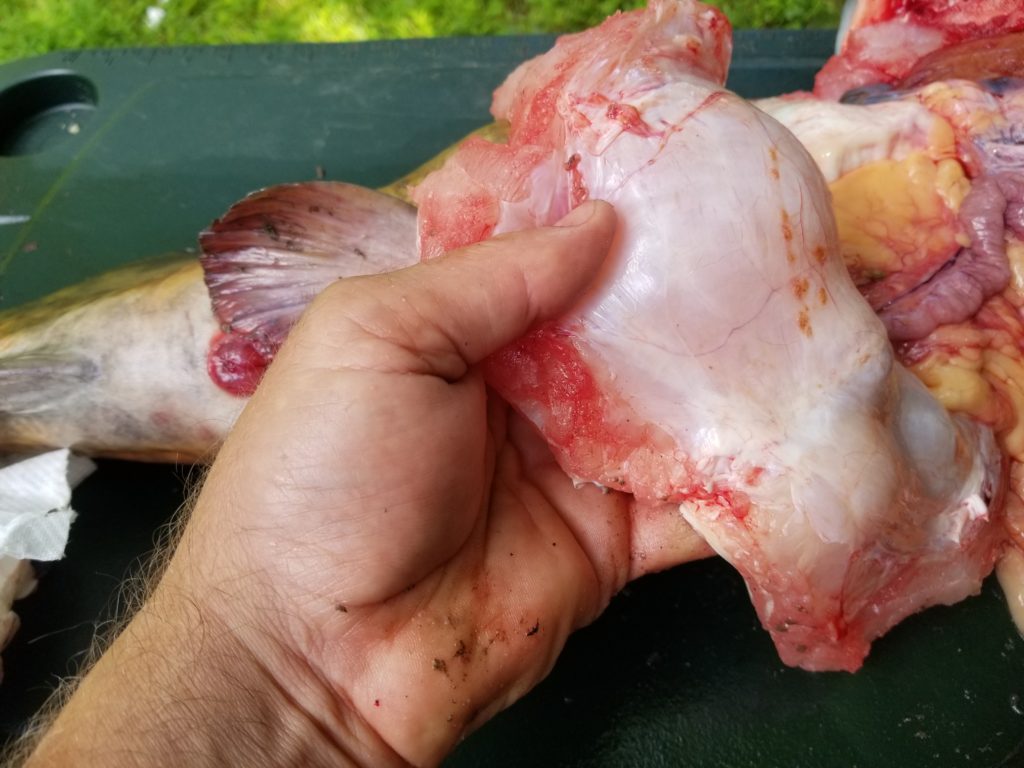 This is the belly meat of the Flathead. 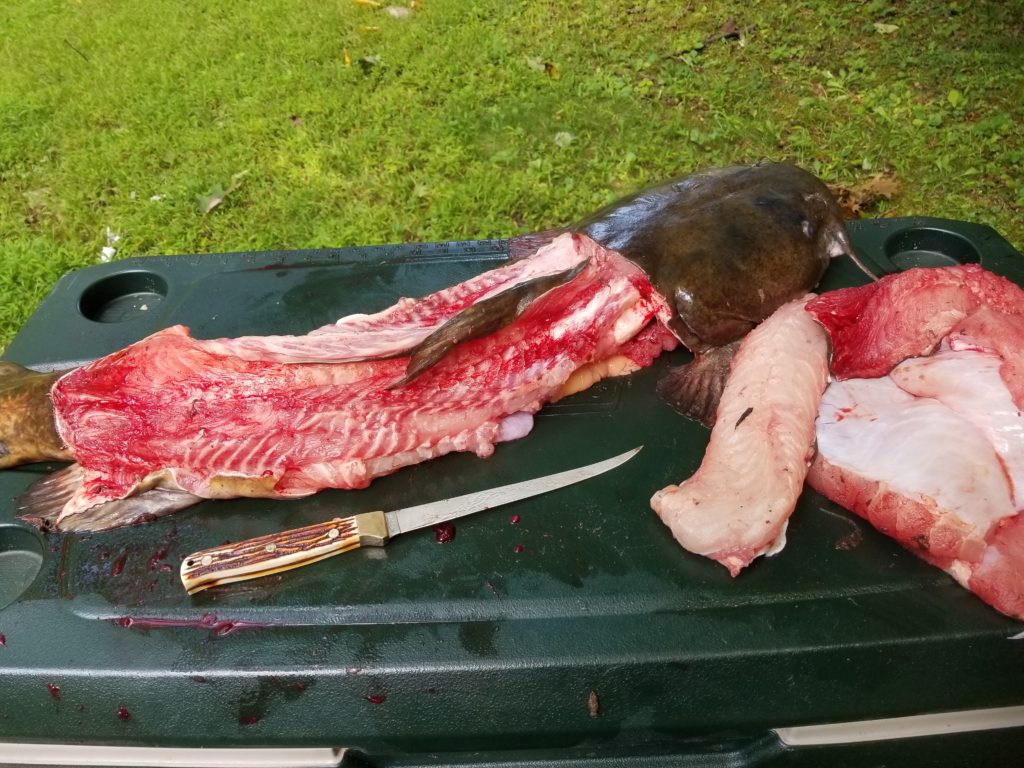 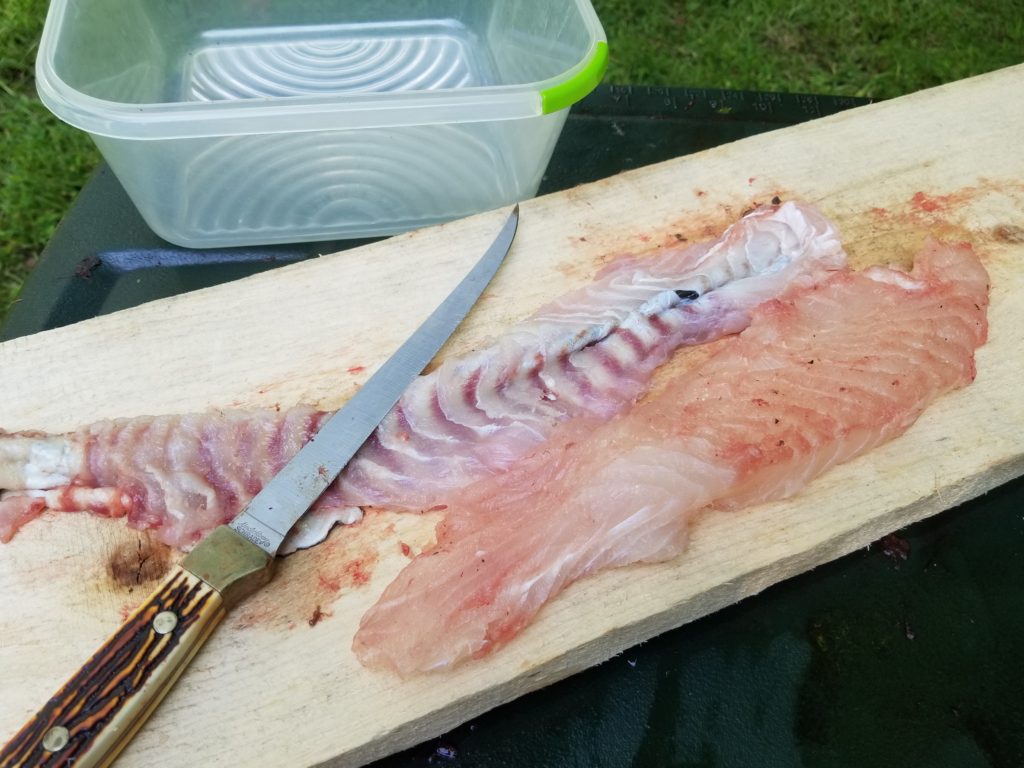 Trimming off the red meat. 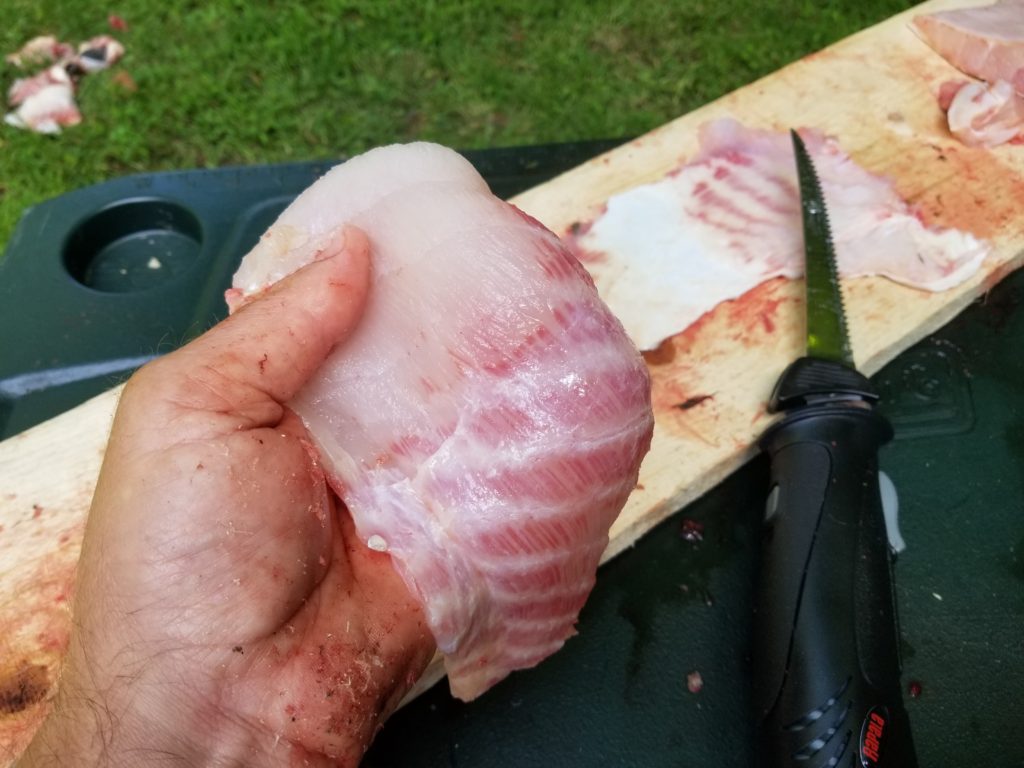 Trimming up the belly meat using my electric fillet knife. 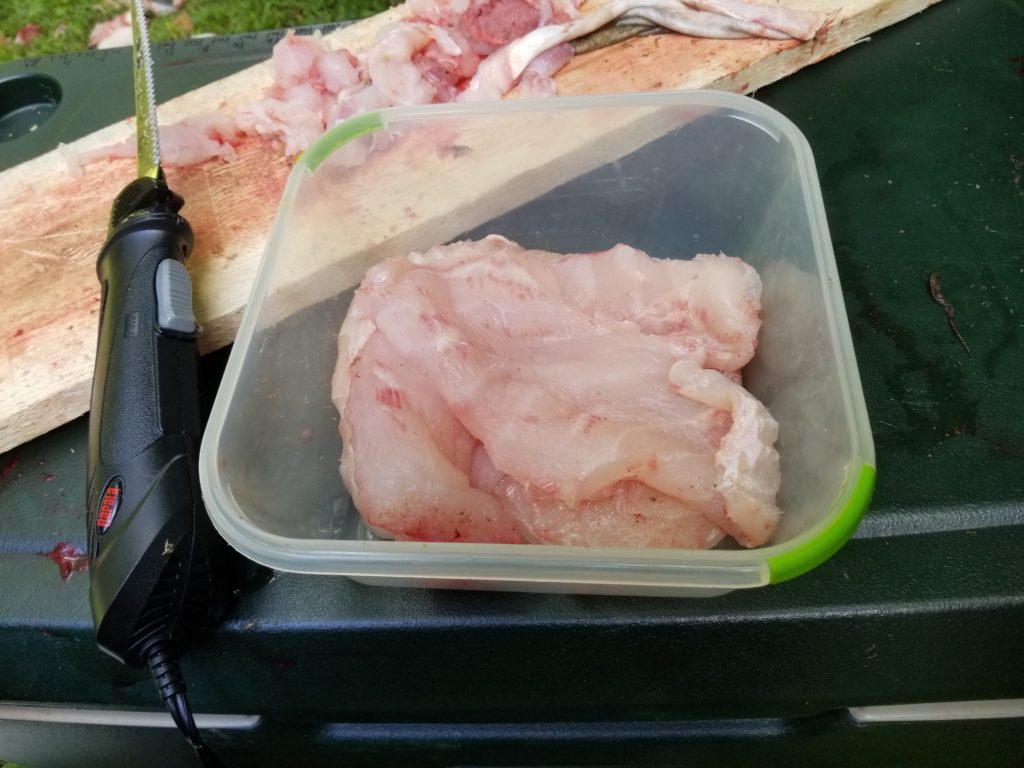 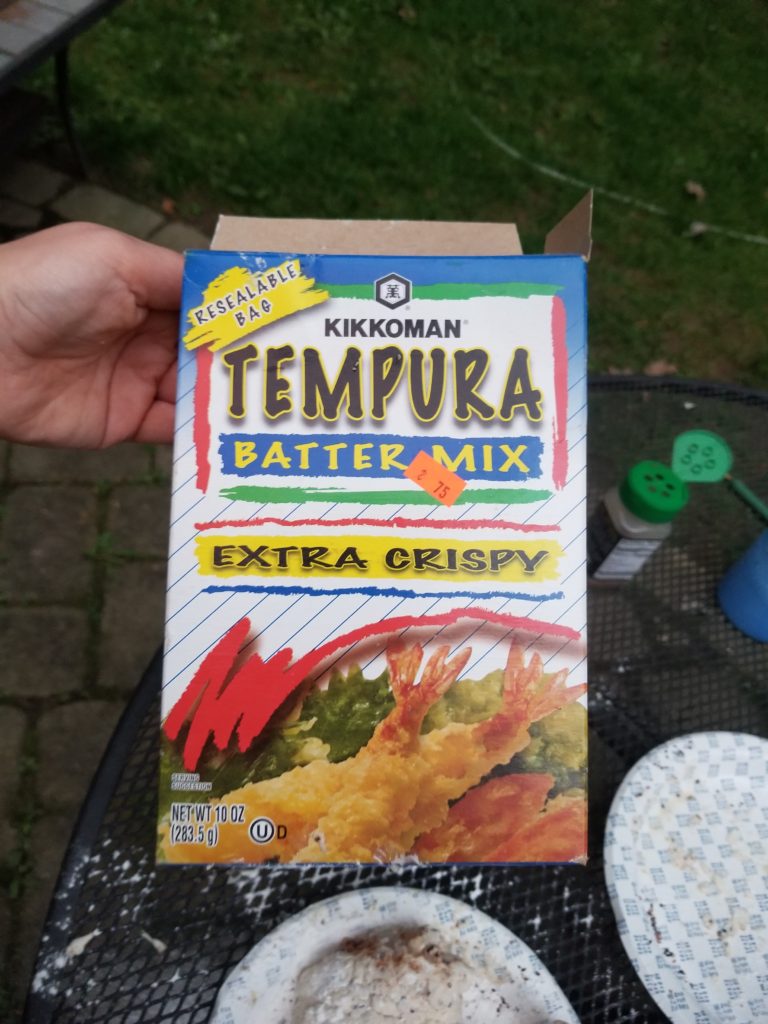 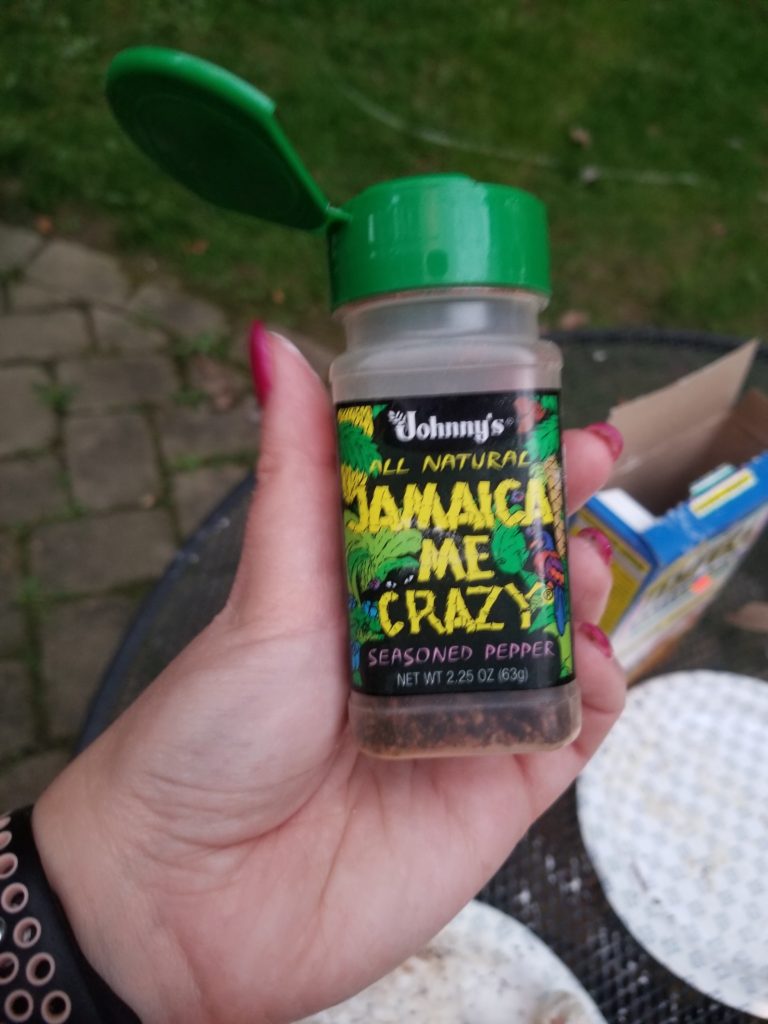 Then Sharon worked her magic………. 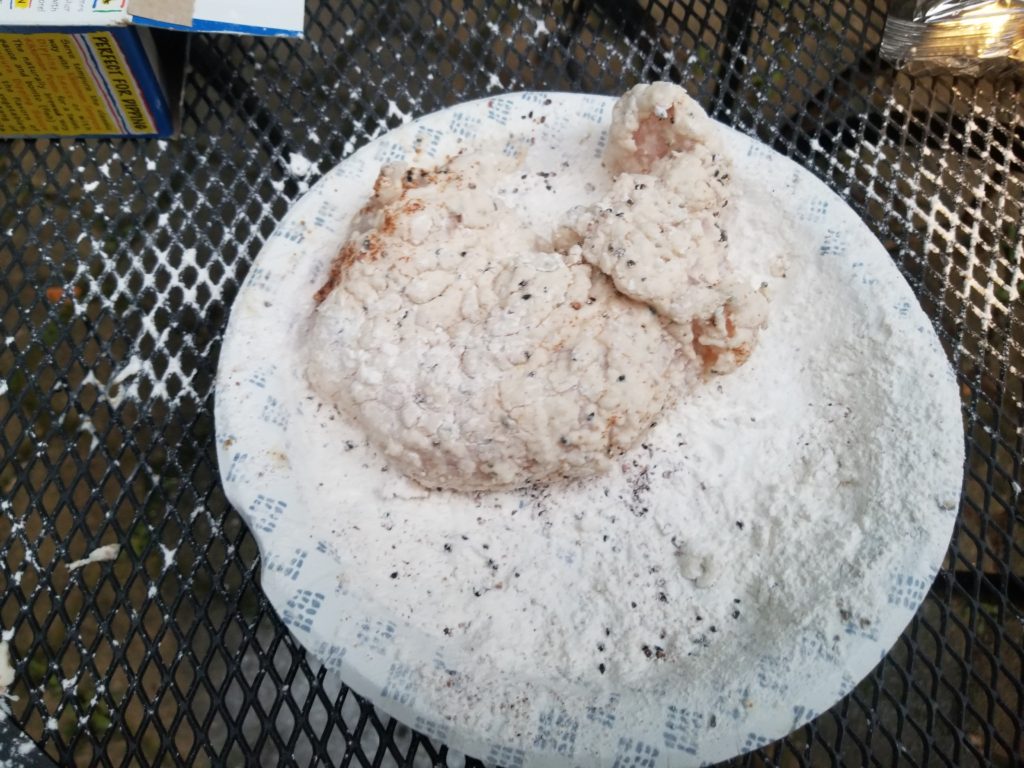 Ready to ride the oil! 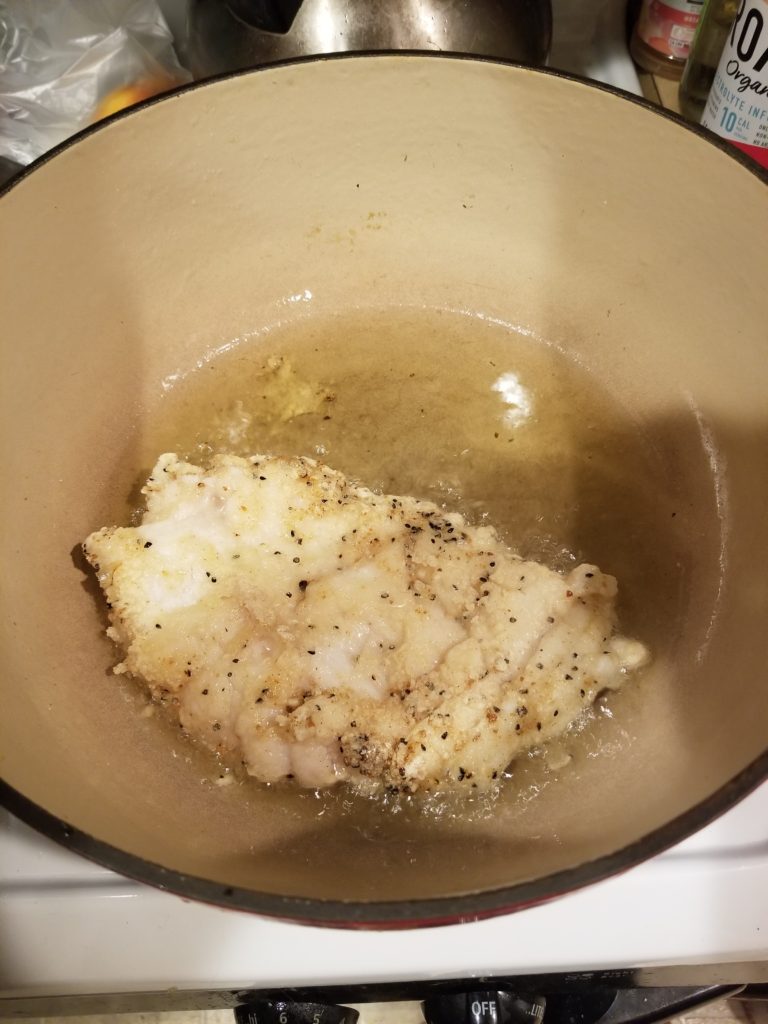 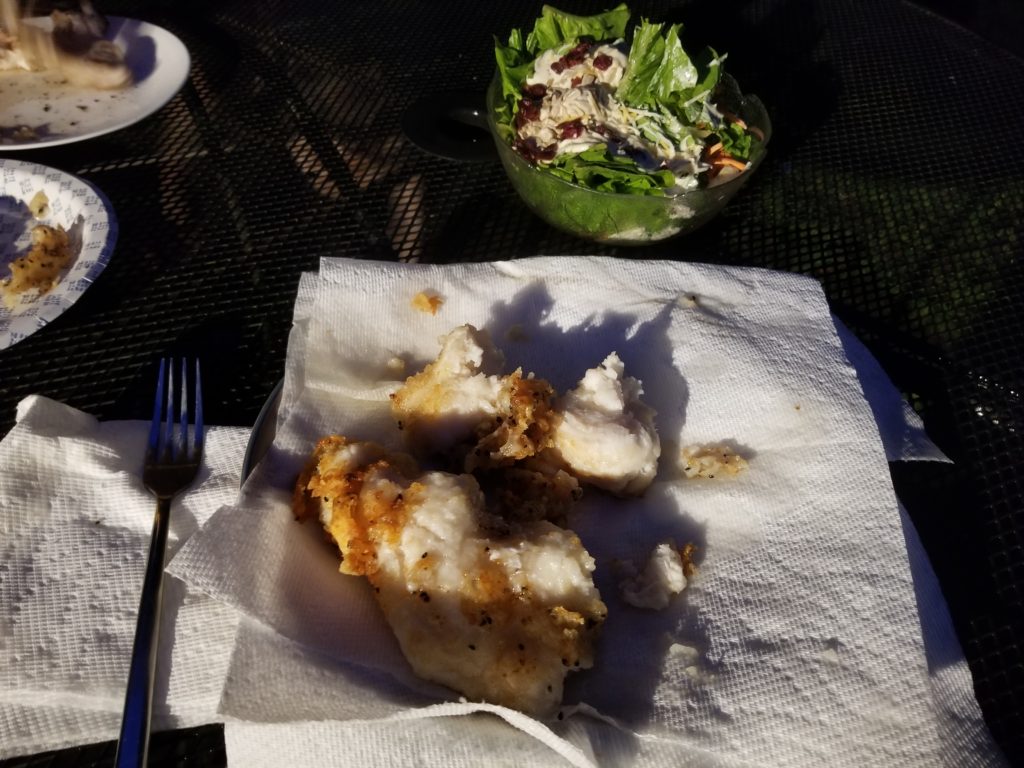 Mmmmmmmmmmmmmmmmm! Supper is served!
It was deeeeeeeelicious! If you like eating fish, you`ll love a fresh piece of Flathead Catfish!
And to me, that`s what fishing is all about…….. making new Friends and learning from each other.
What great night on the river…….. Thanks again John. Really enjoyed the company.
Ken-